During storms the sewer infrastructure in the South Hartford and West Hartford neighborhoods cannot accommodate the increased volume of water. The result is untreated waste water entering waterways. 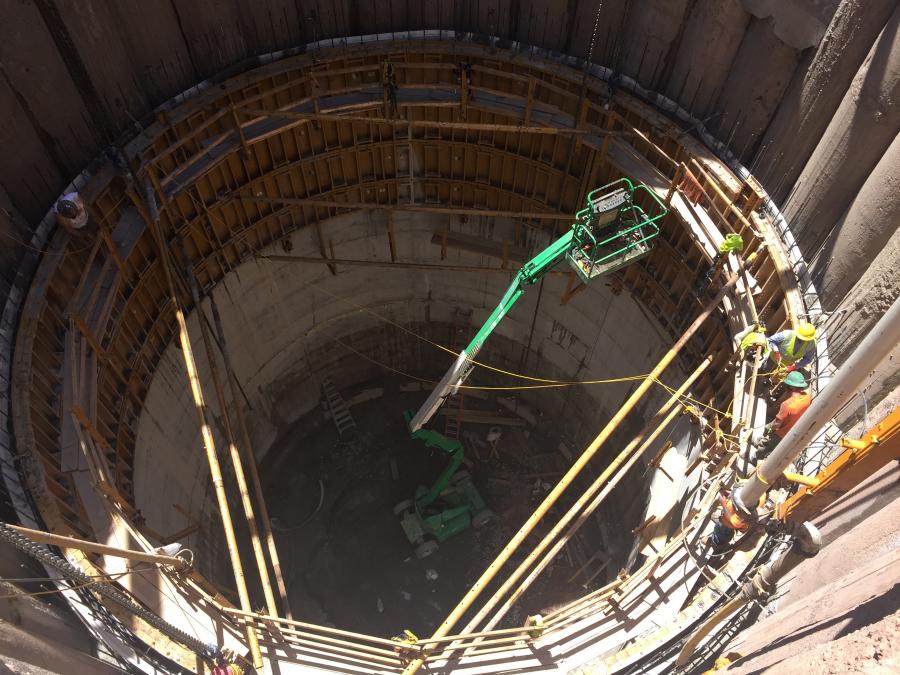 Construction of the launch shaft, pump station shaft and the over burden shaft is under way. All the shaft work will be completed in early 2018 in preparation for the tunneling. (Metropolitan District photo)

Of the Metropolitan District's (MDC) Clean Water Project's five components that will prevent the discharge of untreated waste water into the Connecticut River and nearby waterways, the South Hartford Conveyance and Storage Tunnel (SHCST) is the most complex and critical. Currently, during storm events the sewer infrastructure in the South Hartford and West Hartford neighborhoods cannot accommodate the increased volume of storm water, and the result is untreated waste water entering waterways. Once the new SHCST is finished, it will provide the crucial storage space needed to store the waste water and storm water until it can be treated at the Hartford Water Pollution Control Facility.

As the regional water and sewer utility that serves about 400,000 residents in the Hartford area, MDC is responsible for ensuring its eight municipalities are in compliance with federal and state regulations regarding drinking water and discharge of waste water. The reason for the Clean Water Project and its SHCST is because of the city of Hartford's legacy sewer infrastructure. Of the city's 217 mi. (349.2 km) of sewer pipes, nearly half are a combined sewer system that dates back to the 19th century when such a system was commonly installed. A combined sewer system uses a single pipe to carry both waste water and storm water. During heavy storm events, this single pipe discharges the excess flows as combined sewer overflows (CSOs) into nearby waterways.

In response to a federal consent decree issued by the Environmental Protection Agency and a consent order issued by the Connecticut Department of Energy & Environmental Protection to develop a long-term strategy for addressing these CSOs, the MDC created the Clean Water Project in 2006 and identified five solutions. Of the solutions completed or still under way — new interceptor pipes to the treatment plant, treatment plant improvements, sewer separation (also called source separation, which uses separate pipes for waste water and storm water), and reduction of inflow and infiltration — the SHCST provides a storage solution.

“The size and scope of the tunnel became a reality in the last five to six years when we went away from source separation projects,” said Susan Negrelli, director of engineering for the MDC. “Sewer separation was becoming very costly here in Hartford. The reality of having to completely eliminate some of the overflows in the southern portion of Hartford led us to expand the size of the tunnel alternative, and eliminate some proposed separation projects.”

The Park River Auxiliary Conduit, a flood control tunnel that had been installed in Hartford in 1979, provided some lessons learned for the SHCST, as it was constructed in similar geology. Of the elements what went into the design process, Negrelli said, one of the most important factors was locating it near “the combined sewer overflows that we needed to control and basically having one terminus of the tunnel be at or near our water pollution control facility since we're going to treat that water eventually.” However, another important consideration was the tunnel-boring machine's turning radius, as well as securing the land where the drop shafts, which would convey the overflows from the street level down to the tunnel, could be located.

“The volume of the tunnel was determined by the size of the storms that we needed captured to comply with our consent order,” Negrelli explained, adding that they estimate the tunnel will be operating up to 50 times a year.

In all, 229 subterranean easements were required for the project, and MDC engaged in numerous outreach efforts to secure the community's support.

“When the community realized the good of the project that we're eliminating overflow and the tunnel is actually 200 ft. (60.96 m) deep, they haven't been against the project,” she said.

Kenny and Obayashi JV (KO JV) was the winning bid, with a bid price of $279.4 million, and one of the reasons for bidding on the project was their experience building conveyance tunnels. “We're currently finishing up on a project in Columbus, Ohio, basically the same [type of CSO] tunnel,” said Mike Surman, project manager for KO JV. “We currently just started a tunnel in Akron, Ohio, and a project in Chicago, a little conveyance tunnel for the same purpose.”

The SHCST project consists not only of constructing the tunnel and the tunnel-boring machine's launch and retrieval shafts, but also a tunnel pump station shaft, 15 drilled shafts, eight adit tunnels, seven deaeration chambers, a suction header tunnel, and an Odor Control Facility at the retrieval shaft in west Hartford.

Although the notice to proceed was issued on Aug. 1, 2016, Surman said he and crews were on site two months earlier to “get ahead of the environmental and wetlands mitigation.” With route going through existing wetlands, replacement wetlands had to be created first. Work started at the launch shaft near the Hartford Water pollution Control Facility, and crews will concrete line the shaft from its bedrock base up to the surface. The drilling work was subcontracted out to Case Foundation Company, a firm which specializes in deep foundation work. In the case of the drop shafts, Surman said that once Case is done drilling and casing in the overburden from the surface down to the chamber level, his crews come in to drop the pipe and cap it.

“By this time next year, the only sites that will be active will be the launch shaft site where the tunnel boring is going on and the retrieval shaft,” he said.

During the site work at the launch shaft, the discovery of more PCBs in the soil than was initially expected resulted in some logistical challenges to ensure that all the PCB-contaminated soil was managed properly, while still allowing the shaft work to progress. Negrelli credits the ability to make progress to teamwork and collaboration among all the project participants.

“Properly characterizing and managing the soil in a time-sensitive environment was a complex task that required close coordination among KO JV and its subcontractors, the District, the designer, construction manager, and state and federal regulators.”

“We'll do quite a bit of erecting of the machine on top of ground, but we won't be ready to start tunneling until after the first of the next year,” said Surman.

The tunneling will be completed in 18 months, and Negrelli said that the SHCST will come online in 2023, after the pump station is constructed and connections installed between the existing overflow locations and the new drop shafts.