Congested Site no Match for Sterett and CC 2400-1 Crane

Crane service and rental company, Sterett Crane & Rigging of Owensboro, KY, recently completed work on a seemingly impossible project for the City of Evansville, IN. 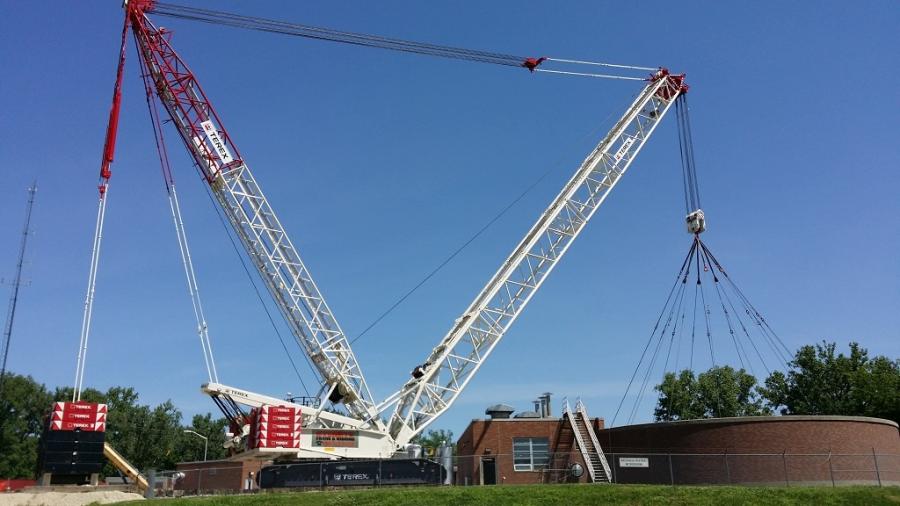 Periodically, crane service companies run into one of those lift projects where everything is seemingly stacked against them. Tight spaces filled with obstacles leave little room for crane assembly, let alone leaving little room to maneuver the load. Objects buried underground can limit the weight bearing load during the lift. And the weight, size and shape of the object to be lifted makes it necessary to expertly select the right crane – compact enough to work in the congested site yet still provide capacity – to pull off the challenging pick.

Crane service and rental company, Sterett Crane & Rigging of Owensboro, KY, recently completed work on one such impossible project for the City of Evansville, IN. Working with Bowen Engineering, a heavy civil construction company based out of Indianapolis, Sterett's expertise was required to complete lid removal and replacement of the eight anaerobic digester tanks, critical to the water treatment program at the East and West Evansville Wastewater Treatment Plants (WWTP).

“Having sufficient space alone to bring in and assemble the crane was challenging enough,” recalls Matt Crisp, Crawler Crane Fleet Manager for Sterett, about the congested project site at the 34-year-old facilities. “In order to remove the massive tank lids that weighed in excess of 250,000 lb (113.4 tonnes) each, we needed to mobilize a crane that was small enough to fit into and maneuver in the tight area, while at the same time offer the capacity to lift the heavy lids.”

Out of the dozens of crane options from Sterett's fleet, the one crane that stood out as the best, most efficient option for delivering success at the WWTP project was the Terex CC 2400-1 lattice boom crawler crane. With its 440-ton (400-tonne) capacity, the Terex crane offered power to lift the heavy loads, and its Vario-Superlift structure feature proved to be the X-factor Sterett needed to successfully maneuver about the site at full load, according to the crane's rated capacities.

The digester tank lids were being removed and relocated for sandblasting and refurbishment. Each tank lid weighed between 258,000 to 274,000 lb (117 to 124.3 tonnes). The weight of the load required the CC 2400-1 crane to be equipped in its Superlift configuration, but as the crane's body swung the lids into position to lower them onto the concrete cribbing, the Superlift tray had to maneuver past site barriers.

“The lids alone were 75 ft (22.9 m) in diameter, and we had to rig to them at 16 points,” comments Crisp. “The plan was to pick the lid at a 91-ft (27.7-m) radius, boom up, move the crane a short distance and then swing the ring into position for lowering it onto the cribbing. However, often a tank obstructed the path of the tray as we swung the load, and, at times, we had to be cognizant of the crane's ground contact pressure.”

Normally, assist equipment would be called in to unstack and restack tray counterweight as it maneuvers around the obstruction, but the CC 2400-1 crawler crane features variable tray positioning for the Superlift structure that increases the crane's flexibility for use in congested areas. “The Vario-Superlift configuration on the CC 2400-1 crane offers a variable radius from 36 to 49.2 ft (11 to 15 m) during operation,” explains Daiane Laidler, Regional Business Manager for Terex Cranes. “The Superlift can be configured with up to a 98.4-ft (30-m) mast and counterweight tray with a maximum weight of 529,200 lb (240 tonnes).”

The ability to vary Superlift tray radius not only improved lift efficiency for Sterett, it also resulted in savings. “We saved money on matting, since we varied tray radius during the lift and were not required to stack and unstack the counterweight,” adds Crisp. “The (Vario) tray helped us to save time and money on the assist equipment as well.”

Sterett mobilized its Terex CC 2400-1 crawler crane a short distance from Elberfeld, Ind., to Evansville. Within two days, the 25 truckloads of crane, boom, counterweight and supporting equipment arrived at the Evansville WWTP. “There was only one way in and out of the plant site, and we had to maneuver around many underground lines and tunnels,” says Crisp.

Sterett's five-man crew, along with an operator from Bowen running the set-up assist crane, quickly assembled the 440-ton (400-tonne) crane complete with Superlift attachment, and it was ready for operation within three days of arriving on site. “It was a very tight and congested assembly area,” he adds.

Initially, the load was picked over the toes of the crawlers, and it was walked forward approximately 15 ft (4.6 m). The crane then rotated the lid to position it over concrete blocks that served as the platform for refurbishment. “As we swung the crane, we transitioned the Superlift tray's radius from 49.2 ft (15 m) to 36 ft (11 m) to pass by the tank at the rear of the crane,” explains Crisp. “After passing the obstruction, we extended the counterweight tray back to a 49.2-ft (15-m) radius to set the lid on the blocks. All this was done while under load without removing any counterweight.”

Crisp also recalls one particularly challenging lid lift, where the tank was nearby an underground tunnel, making the area sensitive to ground pressures. “The crane was positioned about 20 ft (6.1 m) from the tunnel, but the tray was sitting next to the tunnel once we swung the load to its final resting place,” he says. Extra bracing was added to the tunnel to keep the ground contact pressure within the permissible limits.

Fortunately, the Terex CC 2400-1 crawler crane comes standard with the IC-1 control system that can calculate the distribution of the ground pressure along both track carriers and gives an estimation of the acting ground pressure. “It was definitely a learning experience with how much weight was gained or lost by shifting the weight in and out at radius,” mentions Crisp.

With an experienced crew of five Sterett members and five laborers from Bowen, the Evansville WWTP digester tank refurbishment project went off as planned, on schedule and within budget, despite the many challenges along the way. “Using the Vario-Superlift tray was the only way to do the first half of the job,” says Crisp. “The CC 2400-1 crane gave us the competitive edge we needed to get the job and the flexibility to complete the job as planned.”

For more about Sterett Crane & Rigging, follow this link: http://www.sterettcrane.com/.

. More information about Terex is available on its website: www.Terex.com.