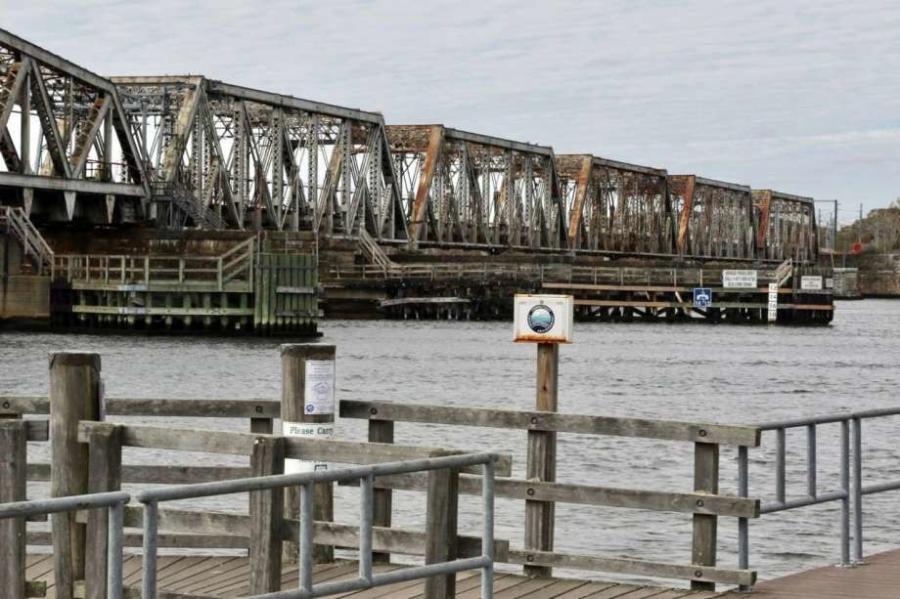 The original bridge, which dates to 1907, is an essential link on the Northeast Rail Corridor between Boston and Washington, D.C.

Connecticut has been awarded $65 million in federal funding to begin the replacement of the 113-year-old Connecticut River Bridge that carries trains over the water between the towns of Old Lyme and Old Saybrook.

The estimated $400 million project, proposed by Amtrak, would replace the existing railroad lift bridge with a new, 1,600-ft.-long bascule bridge 52 ft. south of the old structure.

The original bridge, which dates to 1907, is an essential link on the Northeast Rail Corridor between Boston and Washington, D.C., and would remain operational during construction. It currently carries at least 56 trains every day, bringing not only Amtrak passengers, but also shuttling commuters on the Shore Line East service and giving passage to freight trains headed to Worcester and Providence.

The existing structure will be largely removed once the new bridge is completed.

The funding will kick-start the replacement, which is meant to streamline travel and reduce delays for rail and maritime traffic, said U.S. Sen. Richard Blumenthal and Rep. Joe Courtney, of the 2nd District. Both were on hand for the official announcement Oct. 27 at the DEEP Marine headquarters in Old Lyme.

Blumenthal and Courtney said the bridge, though historic, is subject to breakdowns that slow both rail and boat traffic. When there are rail delays on the bridge, Blumenthal said, "traffic is paralyzed up and down the East Coast." The senator also noted that Amtrak's Northeast Corridor is the busiest in the nation and the trains that run along the century-old bridge are a pivotal mode of transportation to southeastern Connecticut.

"There is tremendous potential for increasing the flow of rail traffic here if we have reliable speedy crossing of this river, which right now is simply not happening," he explained.

"It's time to move on to a new structure," added Courtney. He called the project a "really exciting development for the state of Connecticut and also for the crusade and cause of really improving and upgrading ground transportation."

The new bridge, which will be located just south of the current bridge, will be higher — 24 ft. instead of 18 — allowing for larger boats to pass underneath. Current designs call it to have the same two-track configuration and allow trains to pass over at 60 mph, rather than the current 45 mph speed limit.

The $65 million award will cover funding on the first phase of the bridge replacement. The monies are part of a $144 million grant from the Federal Transportation Administration's (FTA) State of Good Repair Grant (SGR) program, which also will allow for the replacement of the Walk Bridge down the coast in Norwalk.

Blumenthal said the funding is "great news but it's only a down payment."

The proposal included a $40.45 million contribution and $14.46 million commitment from the Connecticut Department of Transportation (CTDOT).

Keith Brothers, business manager of the CT Laborers' District Council, commented that projects like the new rail bridges create hundreds of jobs. Courtney called the project a "job multiplier" and Blumenthal said there would be a huge return on investment, not only with more jobs but with more economic growth and support for small businesses.

The bridge is the oldest of its kind between New Haven and Boston. At the time it was built, Courtney said, it was "a wonder of the world." Before it was erected, he said, trains had to stop on the Old Saybrook side and move passengers and freight to barges to get across the river.

"It's really done great service over the years," he said of the bridge, "but as you can see it's definitely showing its age and the need to repair and fix [it] has reached a point where it really is time for the Amtrak system and the federal government to step in.

"As much as we love it, and we do love it, 113 years is a long time for a bridge to exist," Blumenthal said.

The environmental assessment for the new bridge has been completed and the design for the replacement is almost finished, he confirmed.

Construction is expected to begin in 2024 and be completed by 2030.