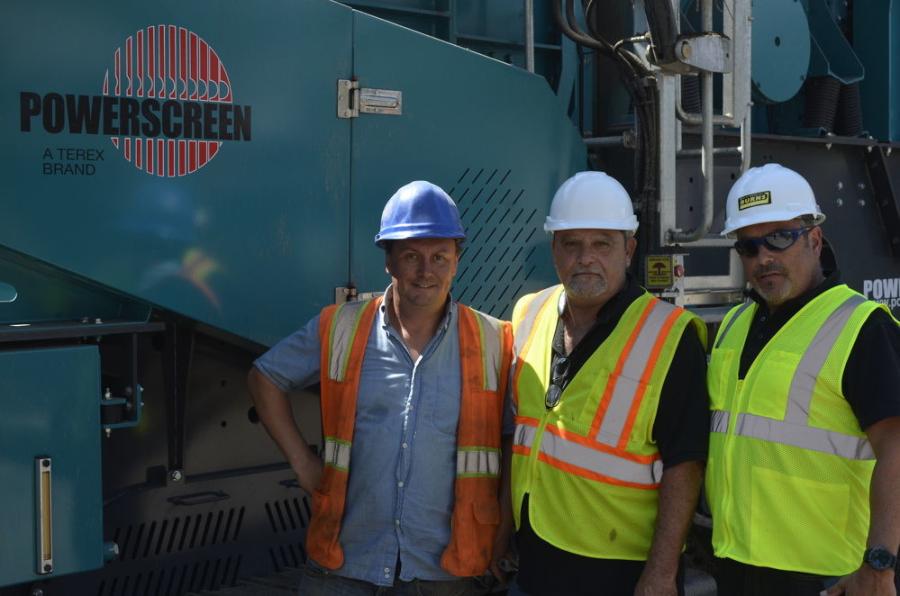 Burns Construction was established in 1957 by Ed Burns Sr. with one truck, a small crew and a focus on residential paving.

Over the course of the past 53 years, Burns has experienced steady growth and today is not only still involved in residential paving, but has expanded to tackling paving projects that include airport runways and everything in between. Additionally, the company has expanded to playing a major role in utility construction, handling major projects and repair for various water and gas companies.

In 1991, Burns diversified and started B.C. Sand & Gravel, located at 412 Housatonic Ave. in Bridgeport, Conn. The concept was to provide a one-stop location for trucks to drop off asphalt and concrete for recycling into a reusable aggregate product because, at the time, there was not an approved site in the Bridgeport area of Connecticut for contractors to dispose of concrete and asphalt waste products that were being removed from paving or demolition sites in Connecticut.

In addition to asphalt and concrete, the site also accepts shot rock, boulders and clean fill. No organics are accepted at the site.

As Burns Construction continued its growth in the utility market it faced two challenges. One, having the disposal of its own construction waste products from excavating utility lines; and two, having a consistent and reliable source of bedding sand and other aggregate materials needed for its pipeline work. So, in addition to solving the local market's need for an asphalt and concrete recycling facility, it also was able to resolve some of its own internal needs.

The site in Bridgeport that it was permitted for was very small — only 7-1/2 acres. To design a crushing screening and recycling plant and have room for stockpiling waste materials as well as finished aggregate stockpiles, along with room for a scale house, has been a challenge from the start. However, with patience and careful planning over the past 25 years, it has been able to make it work.

From the wide variety of waste products that are delivered to its site, B.C. Sand & Gravel can recycle and produce an assortment of aggregate products, which it uses on its own construction projects for Burns Construction, as well as selling products to area contractors and municipalities. These products include 5 mm pipeline bedding sand; state-approved processed stone; crushed stone (3/4- and 1-1/4-in.); screened fill and millings.

Turning to Powerscreen for Help

When brothers Ken and Ed Burns first started putting together the equipment to build their recycling facility, the most economical way to approach the project was by purchasing used aggregate plants that they could configure to meet their needs. These included a Cedarapids static jaw; a Nordberg impactor; a Diester screener; and an assortment of conveyors to close circuit the plant and concludes with a Powerscreen 1400 Chieftain.

Their original setup involved materials initially being processed through the primary jaw and then fed to a pre-screener and then on to an impactor. In this phase, the 1-1/4-in. processed stone was created. From this point, due to the small footprint of the facility, remaining materials had to be taken by loader to the Powerscreen Chieftain to create a 5 mm pipeline bedding sand.

This setup worked well for Burns, but as B.C. Sand & Gravel grew two things became apparent. If there was any way possible to reduce the footprint of their processing plant, the space was badly needed; and that loading and unloading materials to feed the Powerscreen Chieftain was adding at least $1 per ton to their cost of producing product. This significantly affected the total efficiency of the operation.

To explore their options, the Burns called in Graham Wylie of Powerscreen New England — the authorized dealer of Powerscreen, Portafill, Telestak, Cedarapids and Doppstadt for Connecticut, Massachusetts, Rhode Island, New Hampshire and Maine. Throughout their years in business, Wylie and Powerscreen New England had been instrumental in setting up Burns's original plant and keeping things running as smoothly as possible.

Wylie was aware of their situation and already had formulated a plan for the inevitable updates needed at B.C. Sand & Gravel.

A New Heart of the Operation

After carefully considering the situation, a plan was put into action that called for replacing the entire crushing spread except for the primary jaw crusher.

The centerpiece of the new spread would be a Powerscreen Trakpactor 320SR, a mid-sized, horizontal impact crusher specifically designed to offer excellent reduction and high consistency product shape in quarry and recycling applications. It is a tracked machine that features a pre-screen and double-deck post screen recycling conveyor that returns oversized product to the crusher for further reduction.

The plan called for materials going from the jaw directly to a pre-screener that separates all of the valuable 5 mm sand. All other product goes directly to the impactor to produce a 1-1/4-in. processed stone.

Materials exceeding that size are conveyed back to the impactor for re-crushing.

According to Wylie, “This particular machine was intricate in achieving all of B.C. Sand & Gravel's goals and brought along with it several bonuses. The machine is tracked and can be easily transported to do onsite work if ever necessary. It can also produce ¾-in. stone, as well as 1-1/4-in. stone.

“The spread is equipped with a double deck post screener, which allows one, two or three products to all be produced simultaneously. Being located in an urban setting, environmental issues are always of concern. The plant offers a water system for dust suppression. The Powerscreen Trakpactor 320SR is powered by a Tier IV Scania engine, which meets all environmental emissions standards.”

The machine also is equipped with two hydraulic adjust curtains with the option for a third, and a hydraulic overload system, according to Wylie.

“Traditionally, the lower belts in this type of system are exposed and susceptible to damage. The Powerscreen Trakpactor is equipped with an under pan that protects the lower belts.”

B.C. Sand & Gravel's plant also was specially equipped with extended side conveyors for the 5 mm sand. This allowed the materials to be easily collected and moved by a 150-size loader.

Another big advantage to the Scania engines, besides their low emissions and low fuel consumption, is that Powerscreen New England is a servicing dealer for Scania.

“It is a common problem for producers over time to have an issue develop with one of their plants,” Wylie said. “Typically, their first call is to the dealer who sold the plant. If the problem points back to the engine and the aggregate dealer is not a servicing dealer for that engine, the repair process starts all over again. I have also seen situations where the engine dealer blames a problem on the plant manufacturer and vice versa. With this system, when we service or repair the machine, you are dealing with a single source.

“Another key feature is that the Powerscreen Trakpactor 320SR is equipped with Powerscreen Pulse. This technology allows us to run troubleshooting and service codes from our office. Oftentimes, we will know that a problem is developing before the customer is even aware of it. In the event of a failure this system gives us the opportunity to troubleshoot the problem and show up on our first trip with the parts necessary to make the repair.”

Anytime an aggregate production plant is replaced, time is of the essence. If B.C. Sand & Gravel is not processing material, they are not making money. The existing static plant was taken down in a single day and the replacement plant immediately put in its place.

According to Ed and Ken Burns, the benefits were seen immediately.

Production levels increased dramatically and immediately, in part because fewer fines are being sent forward because of the addition of the box screen on the Powerscreen 320SR, which means more sellable product is being produced. In addition, five-mm sand is being produced without rehandling — 1-¼ and ¾-in. stone can be produced on demand with a simple push of a button on the new Powerscreen 320SR. With the old system, oversized materials were being sent to the jaw to be reprocessed. With the new system, oversized materials are conveyed back to the Powerscreen impactor, leaving the primary jaw to focus on its job 100 percent of the time. Dramatically fewer fines are being created in the production process which means more sellable product is being produced, they said.

The new crushing spread also takes up significantly less space, which leaves more room for maneuvering trucks and stockpiling product, and the materials being produced are meeting a better spec, with less dirt in the finished product.