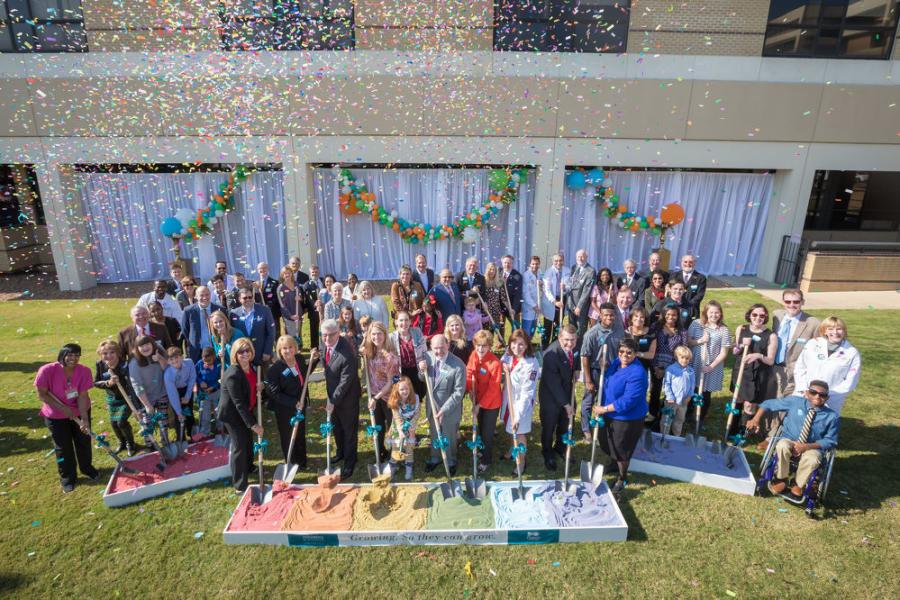 Patients and doctors were among those who turned out for the groundbreaking, which featured confetti, along with shovels dug into a rainbow of colored sand.

Scheduled to open its doors in 2020, a $180 million pediatrics tower is currently under construction at the University of Mississippi Medical Center (UMMC) in Jackson. In December of 2017, Gov. Phil Bryant and other officials broke ground on the seven-story, 340,000-sq.-ft. structure, which will include 88 private NICU rooms, additional pediatric intensive care rooms, 12 operating rooms, a children's imaging center and an outpatient pediatric specialty clinic.

“This expansion of Children's of Mississippi will transform pediatric care in Mississippi, now and for years to come,” said Dr. Mary Taylor, Suzan B. Thames chair, professor and chair of Pediatrics at UMMC. “Children's of Mississippi has patient outcomes that are among the best in the nation, but our health care providers are providing this world-class care in a 21-year-old hospital that we've outgrown. Our neonatal intensive care unit was built for 30 babies, but we care for three times that number. More room is needed for pediatric intensive care and for surgeries.” 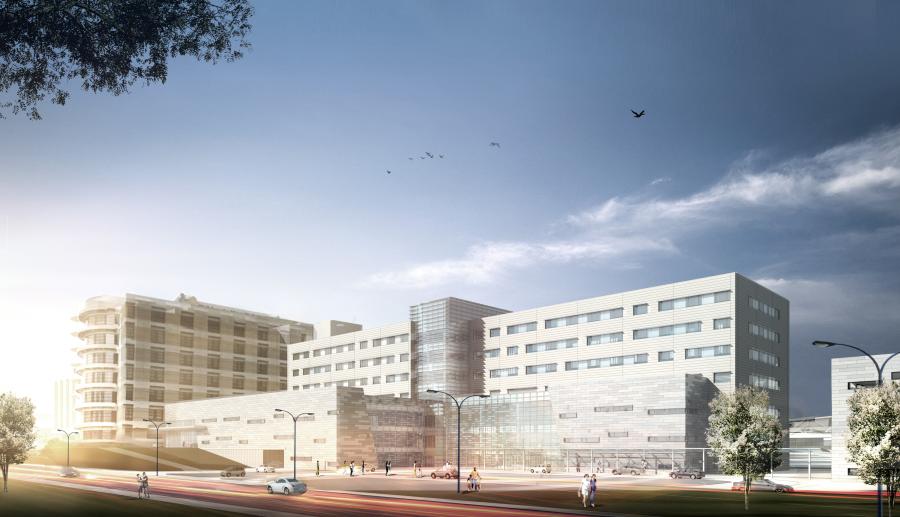 Being built adjacent to Batson Children's Hospital, the pediatrics tower is an essential addition to the campus. A new elevator lobby and public access corridor will tie into the existing tower. Batson Children's Hospital uses the imaging department of UMMC, which is a quarter-mile hallway walk away. The machines there are built for adults, and the décor is not child-friendly.

The campaign kicked off with a $10 million donation from Sanderson Farms CEO and board chairman Joe Sanderson Jr. and his wife, Kathy. The Sandersons are co-chairs of the Campaign for Children's of Mississippi, while New York Giants quarterback Eli Manning and his wife, Abby, serve as honorary co-chairs. The Mannings have pledged $1 million to the campaign, which has raised more than $64 million, to date.

“This project is not just for the children who need it today,” said Joe Sanderson Jr. “It's for future generations and is part of a strategic long-term plan for Mississippi's future.”

“When we see the completed children's tower, and walk through its doors the first time, I think the emotions will be overwhelming,” said Kathy Sanderson. All the children in our state can come to this hospital and get the kind of care that any parent or grandparent would want for their children.” 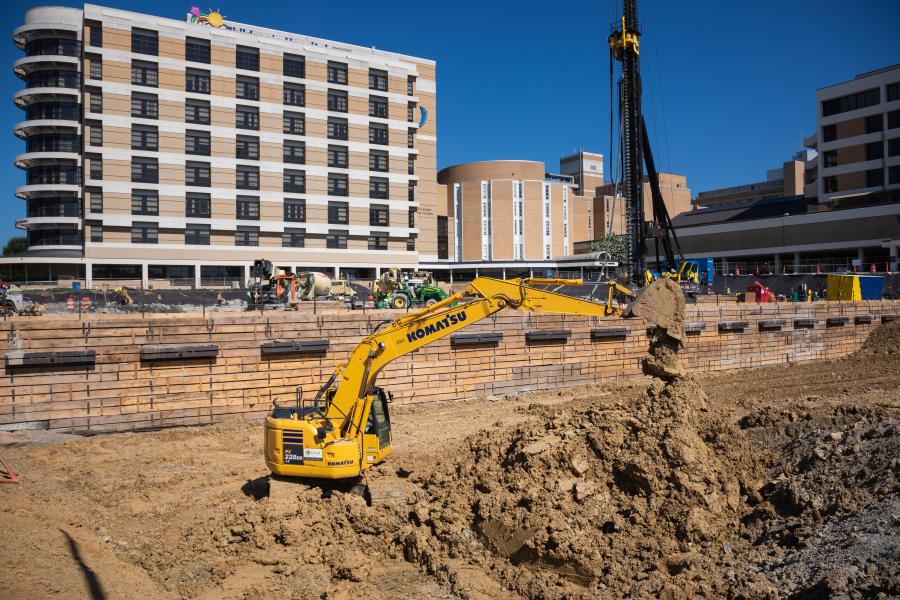 “Now is the time to build,” said Dr. LouAnn Woodward, vice chancellor for health affairs and dean of the School of Medicine, “because we have to use the present to build for the need today, as well as the needs of the future.”

Children's of Mississippi leaders anticipate recruiting 30 to 40 new physicians in the next five years as the facility is built and after it's opened, since it will provide additional capacity. At a minimum, approximately 50 to 75 staff positions, not including doctors, would be added after construction.

In 2017, UMMC won approval from the state College Board to borrow up to $91 million from outside sources to finance the expansion, and the University of Mississippi has agreed to lend up to $40 million from its own cash reserves. Medical Center officials say they may not need all that money, as they are planning to pay for construction in part with private donations and state bond funds.

So far, more than $65 million has been raised toward the $100 million goal of the campaign.

“Looking out to see construction work underway after so many months of careful planning and fundraising is gratifying,” said Patrick Casey, executive director of UMMC's Office of Planning, Design and Construction. “Building a children's hospital is something I have always wanted to do.”

Colorful windows will accent the façade of the hospital, while lobby hues will combine soothing neutral shades with bright pops of lime green, tangerine and turquoise. In the new imaging center, décor will help ease young patients' fears. MRI machines and the walls around them will feature playful designs and bright colors.

Patients and doctors were among those turning out for last year's groundbreaking, which featured confetti, along with shovels dug into a rainbow of colored sand. A former leukemia patient, Mary Ellis Cravey, opened the program by singing “What A Wonderful World.”

Work began in February 2018, with completion scheduled for fall 2020. Currently, the project is in the mass excavation and auger cast foundation stage.

The biggest concern is making certain that crews don't disrupt existing hospital services, in hopes of minimizing patient inconvenience during the building process.

“A new entry drive has been installed to allow for the closure of Peachtree Street,” said Landon McCaskill, project manager with Brasfield & Gorrie, which serves as construction manager.

“Once the foundations are complete, the concrete structure will be built. As the structure goes vertical, we will begin framing walls, MEP overhead and in-wall rough in. The skin will be put on by elevation. Once the skin is complete, the exterior, which includes final site work, landscaping, paving, will be completed.”

“The construction site is on a former parking lot,” said McCaskill. “To accommodate visitors, parking has been moved to another parking garage nearby, with free valet parking available for patients and their families.” 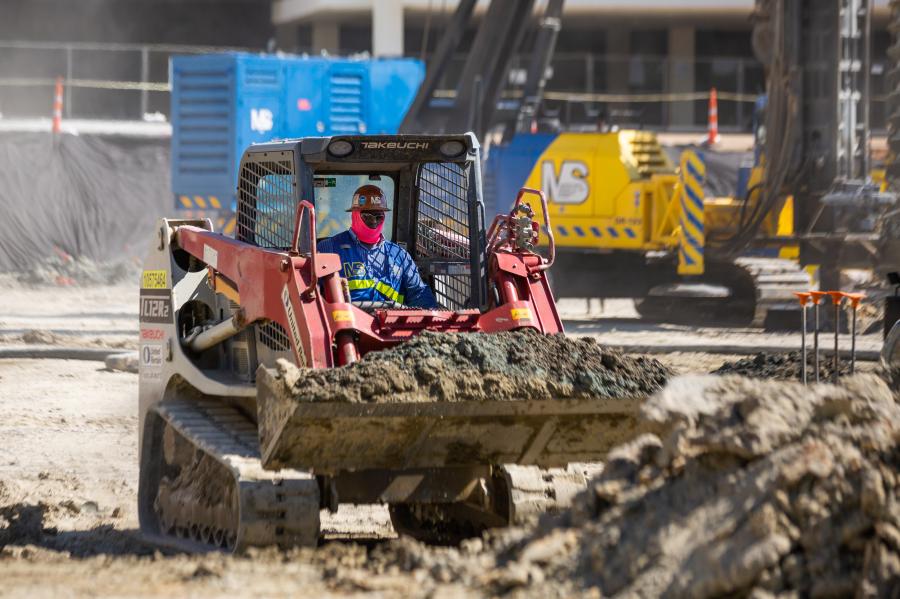 Site demolition and clearing were required, as the tower is being built on two former parking lots. Equipment being used on the job includes: bulldozers, excavators, drilling rigs for foundations, graders, front end loaders, dump trucks, tower cranes, mobile cranes, scissor lifts and aerial lifts. Some of the main materials required to build the pediatric tower will include: concrete, rebar, steel, brick, metal panel, glass/curtainwall, drywall, sheet metal, copper wire and piping. About 50,000 cu. yd. of dirt is being moved on the project.

Weather has not been a major issue, so far; however, rain and lightning have affected some site work and foundation drilling activities. Crews are hoping summer conditions won't take a dramatic turn as they move forward on the complex assignment.

“Health care projects are more complicated than the typical construction project, because they call for higher levels of life safety requirements, codes and regulations,” said Larry McKillop, HDR senior project manager. “Hospital projects also involve more building components and equipment, and create a seamless and meaningful patient and family experience across multiple touch points.” As the project architect, HDR's mission included designing a facility that provides a calming, comfortable environment. Solving current capacity constraints and outdated spaces was equally important, along with ensuring quality and safety and recognizing the facility's ultimate goal of providing outstanding medical care. “Children's of Mississippi and Batson Children's Hospital has many needs with only so much available funding,” said McKillop. “The biggest challenge was to determine what services would be included in the project, and how the project will create a platform for the future.”

“The building will transform UMMC Children's Health care and the campus,” McKillop said. “The building exterior reflects this transformation for the brick which relates to the past history to the new curtain wall and metal panel reflecting the future. It was also important for the new building to complement the existing hospital, and take on its own unique identity.”

Batson Children's Hospital treats patients from all 82 counties in Mississippi, and across the country, who are in need of medical care ranging from childhood illnesses to life-threatening trauma cases. It provides services in more than 30 specialty areas, including newborn medicine, pediatric cardiology, neurology and surgery. It houses the state's only pediatric intensive care unit and emergency department, along with Mississippi's only pediatric treatment programs for cancer, cystic fibrosis, sickle cell anemia and congenital heart defects.