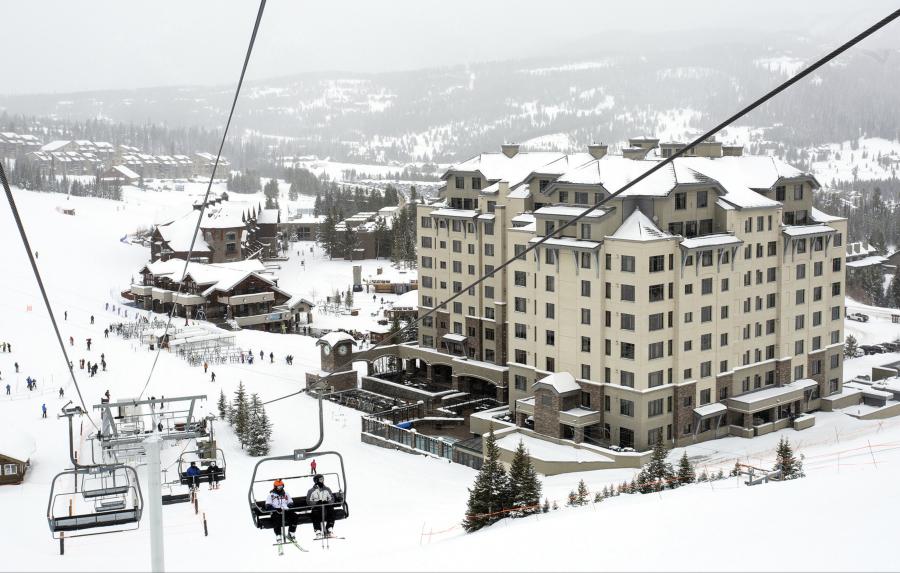 A view from the slopes of the Big Sky Resort in Montana, which is about 20 miles from the west entrance of Yellowstone National Park. The area is the midst of a building boom, with an estimated $1 billion in development over the next decade. (JANIE OSBORNE/NYT)

Stephen Kircher has fond memories of the first time he visited Big Sky Resort, in 1976. A native of Michigan, he traveled to Montana on a reconnaissance mission with his family, the owners of Boyne Resorts.

Having passed on opportunities to buy Telluride Ski Resort in Colorado and Jackson Hole Mountain Resort in Wyoming, his father, Everett, was considering adding Big Sky Resort to the company's growing portfolio, which these days also includes Crystal Mountain and The Summit at Snoqualmie in Washington state.

“Big Sky was a far cry from what it is today,” said Kircher, now 52 and president and chief executive of Boyne Resorts, which his father founded in the 1940s. The resort had four chairlifts, 70,000 skier visits per year and a gravel road from Highway 191 to its base. “There was one direct flight to Bozeman, and that was from Billings,” he added.

Even so, the family saw promise in the expansive resort, 40 miles south of Bozeman and about 20 miles north of the west entrance to Yellowstone National Park. “It was a bluebird day,” he said, referring to the azure sky, “and I remember seeing Lone Mountain as we came out of the canyon. We said 'Dad, we have to do this.' ” And they did, paying $8.5 million.

Forty years later, the Big Sky area is the midst of a building boom, with an estimated $1 billion in development over the next decade.

The resort, which plans to spend $150 million on improvements between now and 2025, is one of three entities looking to transform the area.

With 5,800 skiable acres and 4,350 feet from its highest point on Lone Mountain to its base, Big Sky Resort is one of the country's largest ski areas. Yet it is still relatively undiscovered.

It has “this enormous ski area with only 500,000 skier visits a year versus Vail at more than 2 million,” said Matthew Kidd, a principal in CrossHarbor Capital Partners, a Boston private equity firm that bought the nearby Yellowstone Club out of bankruptcy in 2009.

After getting that club, which runs its own private ski operation, on solid footing, CrossHarbor saw an opportunity to develop luxury real estate outside the club. In 2013, it bought two other struggling Big Sky developments: Spanish Peaks Mountain Club and Moonlight Basin. CrossHarbor formed the Lone Mountain Land Co. to oversee its development outside of the Yellowstone Club.

The community of Big Sky, which has a year-round population of about 2,500, is also brimming with new construction. Most commercial development is in Big Sky Town Center, a 165-acre development between the highway and Big Sky Resort. In the last few years, the area has evolved into a downtown commercial district with shops, restaurants, a movie theater, an amphitheater and an ice-skating rink. In late 2014, Big Sky got its first full-service grocery store, and in December 2015 the new Big Sky Medical Center began offering emergency services, diagnostics and inpatient care.

For 40 years, the absence of a downtown had been “the rap against Big Sky,” Kircher said. “Everything is coalescing at a fast rate, and we are finally getting a town center.”

Some of Big Sky's growth reflects what's happening in the region. Bozeman's population has more than doubled to 43,000 since Kircher's first visit. Bozeman Yellowstone International Airport now has more than a dozen direct flights, including the recent addition of flights from Dallas-Fort Worth.

Nearly 1 million cars pass by Big Sky every year; much of that traffic is bound for Yellowstone National Park.

Big Sky Resort, for its part, has steadily grown in skier visits, adding roughly 100,000 per decade.

Development has picked up considerably since the recession, said Bill Simkins, whose father bought the land that is now Town Center in 1970, three years before Big Sky Resort opened. The land was undeveloped until the early 2000s.

The recession delayed many plans, he said, but it also gave the unincorporated community an opportunity to gear up for growth.

“This is a huge area, and it straddles two counties,” Simkins said. Rather than having a mayor or a city council, Big Sky is governed through special-purpose districts that make decisions about such things as transportation, parks, sewers, schools and development.

In retrospect, the bankruptcies of the Yellowstone Club, Moonlight Basin and Spanish Peaks may have been beneficial to the area's long-term growth, Simkins said. Not only are the developments on more solid financial footing, but the relationship with the Lone Mountain Land Co. is “symbiotic,” he said. “There is a lot more cooperation than there was before, and that has helped spur development,” he said. “We need the resorts to be successful for us to be successful, and vice versa.”

As with most growing resort communities, the lack of affordable housing tops the list of local concerns; most of Big Sky's workforce commutes to the area.

And at a time when development is ramping up, “I'm concerned that there is a lack of planning for the future,” said Randy Carpenter, the program director for the Bozeman-based Future West, a nonprofit that promotes sustainable community development. “A comprehensive plan for growth for issues of affordable housing, wildlife habitat, water and infrastructure — that has not been done.”

The Yellowstone Club is relatively self-contained. Many of its owners don't want or need to leave the club, and new owners are often friends or acquaintances of existing members.

The success of Spanish Peaks and Moonlight Basin, however, is closely linked to the town and the mountain resort. The amenities and services of Town Center are a selling point for would-be buyers, as is access to skiing. Both developments offer residents ski-in and ski-out access to Big Sky Resort.

The Lone Mountain Land Co. has focused its attention on bringing more visitors — and potential buyers — to Big Sky. That entails building hotels and bringing more foot traffic to the nascent downtown.

The developer has three commercial projects in the works in Town Center: Construction will start this spring on a hotel, and two mixed-use buildings will house retail, restaurant and residential space, as well as development and sales offices.

Back on the mountain, Big Sky Resort just unveiled two new high-speed chairlifts, including one six-person chair with heated seats and plexiglass bubbles to block the wind. It is also opening new restaurants.

These are early steps in a decadelong plan to inject a more European experience into an area, which Kircher likens to the Alps.

The resort will move forward with its plans regardless of what happens elsewhere in Big Sky, he said. Nevertheless, more real estate near the slopes and better services in town certainly make his vision more attainable.

“It's a three- or four-legged stool,” Kircher said. “You can't have more people coming to a place unless there are more hotels and restaurants, and in order for that to happen, you have to have a community.”

For more information, visit the Seattle Times Story at http://url.ie/11nt3.