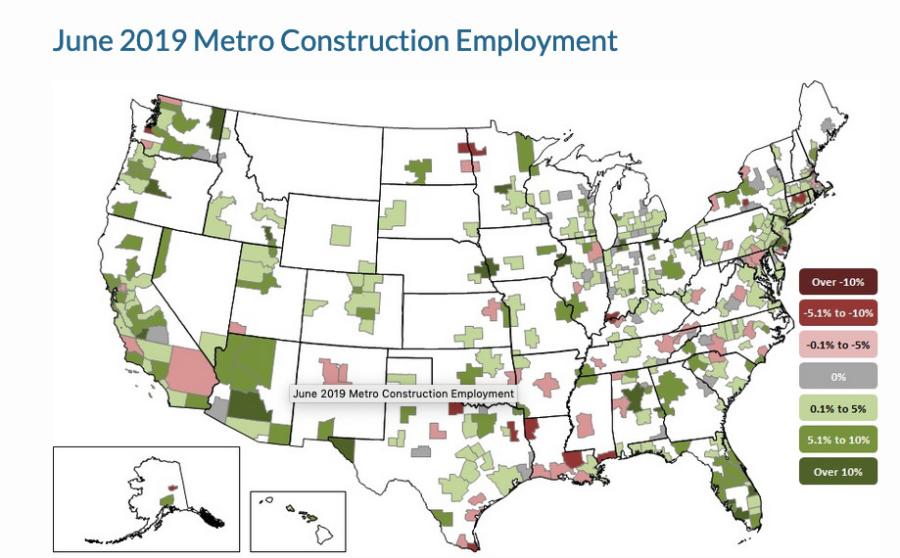 Construction employment grew in 253, or 71 percent, out of 358 metro areas between June 2018 and June 2019, declined in 61 and was unchanged in 44, according to a new analysis of federal employment data released July 31 by the Associated General Contractors of America. Association officials said the employment gains would likely have been stronger if firms could find more qualified workers to hire.

"Demand for construction remains robust in most metro areas," said Ken Simonson, the association's chief economist. "But, with record job openings in construction and the lowest overall unemployment rate since 1969, it is likely even more metros would be adding construction workers if there were enough qualified jobseekers available."

Association officials said that one of the biggest challenges facing many construction firms is the lack of available, qualified workers to hire. Part of the problem is that the nation's higher education system does not place career and technical education on an equal footing with traditional college education. For example, federal Pell grants cannot be used for construction-focused training programs offered by community and technical colleges. They called on Congress and the administration to pass the bipartisan JOBS Act, which would remedy this Pell grant problem.

"It's time to reverse the federal funding bias against career and technical education and allow students interested in vocational education to have the same opportunities available to students attending four-year colleges," Sandherr said. "Creating a level playing field will help introduce more young adults to the many opportunities that await in the construction industry."