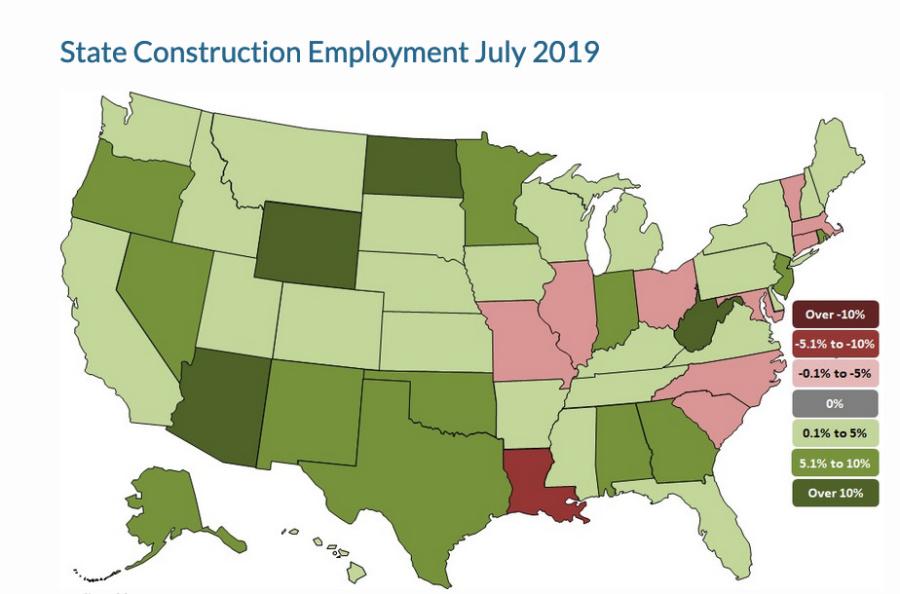 Forty states added construction jobs between July 2018 and July 2019, while construction employment increased in 25 states from June to July, according to an analysis by the Associated General Contractors of America of Labor Department data released Aug. 16. Association officials said the new jobs totals indicate there is a need for new federal investments in career and technical education programs, along with immigration reform.

"Demand for projects, and the workers to build them, shows no sign of letting up in most states, and contractors continue to increase headcount when they can find qualified workers," said chief economist Ken Simonson. "But job openings at the end of June were the highest ever for June, suggesting that contractors are struggling to find all the workers they need in many states."

Association officials said that with overall unemployment rates at all-time lows in many states, there is a pressing need for Congress and the Trump administration to adequately fund career and technical education programs and enact immigration reforms. These measures would enable schools to more easily establish construction-focused programs. In addition, immigration reform is needed that would allow more people with construction skills to enter the country legally.

"Contractors would gladly add even more high-paying middle-class jobs if they could only find more qualified workers to bring on board," said Stephen E. Sandherr, the association's chief executive officer. "The federal government should do more to build awareness of the opportunities and make it easier to prepare and attract more people into construction. Such steps will provide significant benefits to the broader economy."