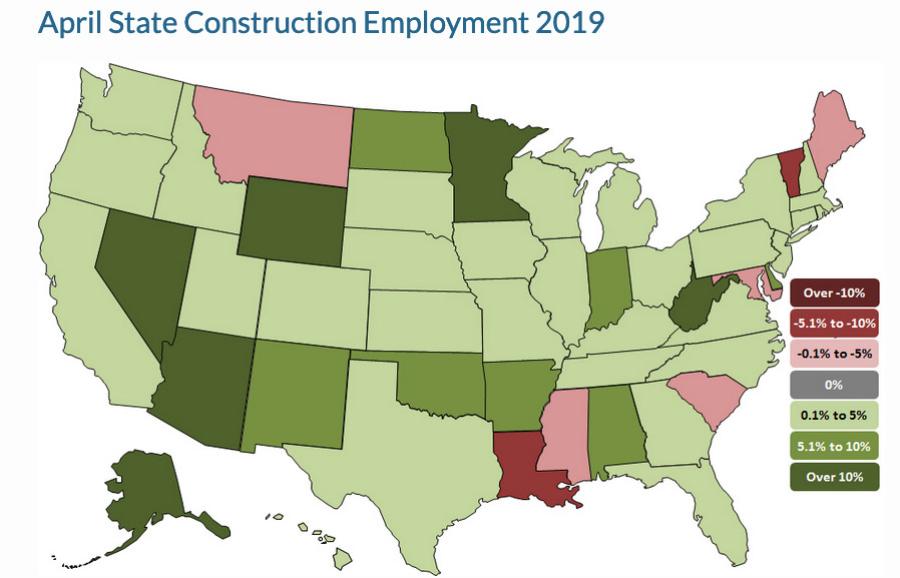 Forty-three states added construction jobs between April 2018 and April 2019, while construction employment increased in 32 states and the District of Columbia from March to April, according to an analysis by the Associated General Contractors of America of Labor Department data released May 17. Association officials said the strong gains show demand for workers remains robust and they urged federal officials to enact immigration reforms to boost the supply of qualified workers.

Seven states and the District of Columbia shed construction jobs over the latest 12 months. The largest job loss took place in Louisiana (minus 8,400 jobs, minus 5.5 percent), followed by South Carolina (minus 3,600 jobs, minus 3.5 percent) and Mississippi (minus 1,800 jobs, minus 4.0 percent). Vermont had the steepest percentage decline in construction jobs over the 12-month span (minus 7.2 percent, minus 1,100 jobs), followed by Louisiana, Maine (minus 4.1 percent, minus 1,200 jobs), Mississippi and South Carolina.

Association officials said the record number of job openings in construction underscores the urgency of enacting immigration reforms that would enable contractors to bring qualified guest workers into the country, along with strict safeguards for American jobs and reduced incentives for individuals to enter the country illegally. They called on Congress and the president to include construction trades that are in short supply in urgently needed immigration reform legislation.

"Contractors face an ever-increasing challenge to find enough qualified workers to hire to keep pace with the ongoing demand for construction," said Stephen E. Sandherr, the association's chief executive officer. "Allowing employers to bring in guest workers for positions that can't be filled otherwise is essential for keeping needed construction on track."