Construction Equipment Parts Serves Its Customers With Range of Offerings

Mellott hopes to grow the company's presence to the national level with marketing efforts such as social media, email, and Google. 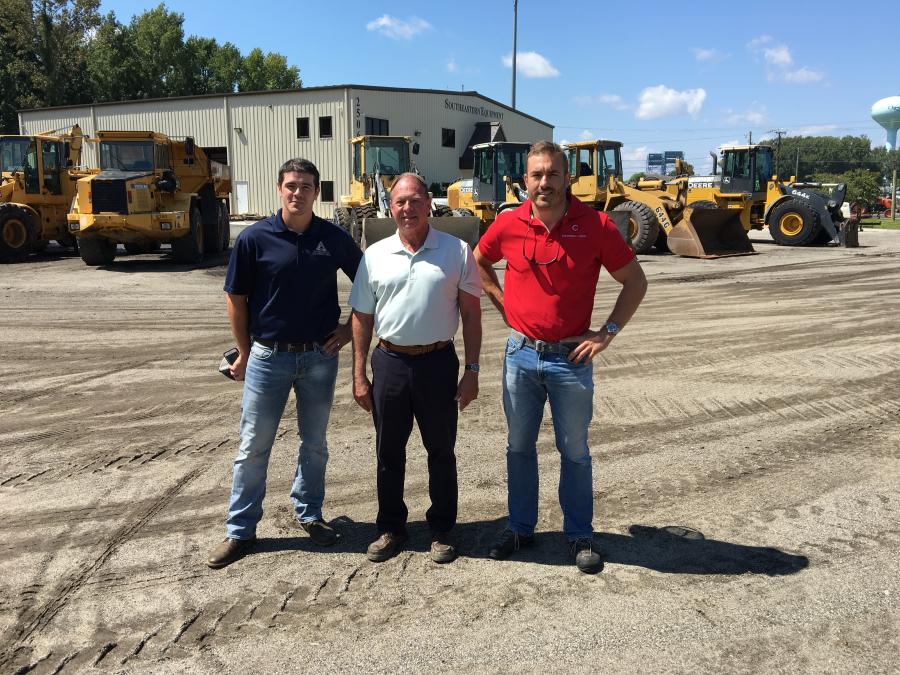 (L-R) are Bryan Smith and Davis and Ryan Mellott.

Ryan Mellott, president and CEO of the company, grew up in the industry. During his childhood, he'd spend weekends in the shop of a John Deere dealership with his father, the sales manager. Then, in 1992, his father started his own business — Southeastern Equipment, a used heavy equipment and rental facility in Chesapeake, Va. Soon after college, Mellott began working with him as a sales manager.

"I would see burnt machines come in that he would pick up locally, but he did not market the used parts," Mellott said. "He would use them for his own inventory. I would see a machine come in, and in approximately three months — with him pulling parts off —it would just be a big metal carcass. I figured if there was that much of a demand here on premises, and if we could actually get out and market it, we could compile a business plan."

That's when Mellott decided to go into business for himself and founded Southeastern Parts and Attachments in 2006. Then, as luck would have it, Bud Kelly and Earl Thomas, who founded Construction Equipment Parts in 1983, were looking to retire. So in 2016, Mellott took the opportunity to purchase the family-run company and rebrand his original company as Construction Equipment Parts.

"I think my Dad had such a strong grip on running the business, and he had so much energy; it was part of his passion," he said. "I also wanted to share that same passion and have my own creation, and do the work parallel with him. He ran at such a strong pace. It was my opportunity to be able to work side by side with someone that I admired and wanted to be like. Ultimately, it ended up being a great idea. The parts business is a separate corporation from my Dad's company. I solely own it."

Today, Mellott said his company carries "nearly every product you can find in the construction equipment world" out of its Chesapeake location. Specifically, he explained John Deere and Hitachi parts are the company's "bread and butter."

"I grew up in a John Deere dealership and spent numerous, countless hours in a shop with mechanics, being around the parts books and just knowing the equipment, so I cannot ever see getting away from the John Deere, Hitachi brand," said Mellott. "But if you can speak that language, you can quickly learn to speak the language of others. Knowing the ins and outs the way we do, we are definitely a very special company when it comes to John Deere and Hitachi."

Construction Equipment Parts carries a wide range of parts, including hydraulic pumps, engines, and valve bodies in addition to working equipment — from the booms to the sticks and rebuilt cylinders. Various brands of transmissions, final drives, and front and rear axles are the company's big sellers.

Moving forward, Mellott hopes to grow the company's presence to the national level with marketing efforts such as social media, email, and Google.

"We are going to create a bigger following," he said. "We are working to find a way to break through in other avenues and through online forums. It involves talking to folks and being able to find someone in another area of the country and say, 'hey look, we can relate to you. We understand what you are talking about.' And, we're also able to express our family values — the way we run our company — and let people know we are selling quality parts."