Construction to Begin in 2017 on Oil Blending Facility

Construction is scheduled to begin sometime in January at the Port of Krotz Springs for a transport facility that will facilitate what is being touted as the world’s largest oil blending operation. 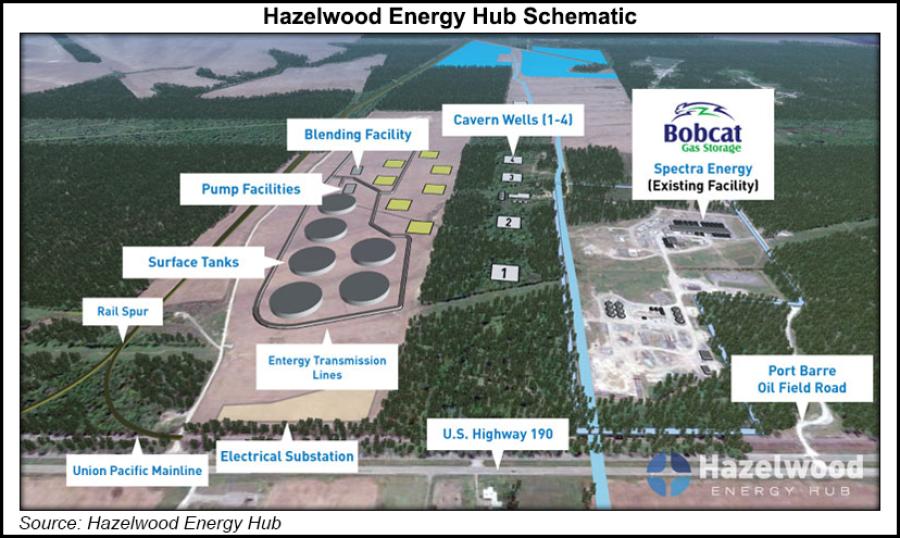 The Hazelwood Energy Hub, scheduled for a 2018 completion, will also utilize 750 acres of underground salt caverns and surface storage which are adjacent to the Bobcat Energy facility located off U.S. 190 east of Port Barre.

Construction is scheduled to begin sometime in January at the Port of Krotz Springs for a $48 million transport facility that will facilitate what is being touted as the world's largest oil blending operation, according to officials with the company spearheading the project.

The Hazelwood Energy Hub, scheduled for a 2018 completion, will also utilize 750 acres of underground salt caverns and surface storage which are adjacent to the Bobcat Energy facility located off U.S. 190 east of Port Barre, company officials stated in a press release.

St. Landry Parish President Bill Fontenot said this week that federal and state compliance applications are just about complete for the privately-owned facility, which he called a “tremendous economic opportunity for this parish.”

Fontenot said the salt domes are “10 to 15 times larger than the Superdome.” He said the salt domes were first discovered near the oil fields in the area around 1929. It was then, he said, that the idea of using the acreage for storage silos became apparent.

A public meeting was held Dec. 7 in Port Barre, where Fontenot said representatives from the Department of Environmental Quality, Environmental Protection Agency and other regulatory agencies were present to answer any questions about environmental impact, said Fontenot.

“What we have been told, and what we are hoping, is that when it is completed, the parish will see about 200-300 permanent jobs,” Fontenot said.

Lynn LeJeune, director for the Greater Krotz Springs Port Commission, said the project will include building a 40-acre facility at the port where oil will be loaded and then transported globally.

In addition to using barges that approach the Port on the Atchafalaya River, LeJeune said shipment of the products will also be accomplished by using a nearby rail spur and trucks, which can use nearby federal highways.

The Port Commission, LeJeune said via email, has already approved the project, which company officials said should initially include as many as 10 permanent jobs with an estimated annual payroll of $1 million.

LeJeune wrote that the Port will receive payment for land rental and other charges from the various companies involved in the project. The construction effort will also include help with access to pipelines, refineries and distribution along the Gulf Coast.

“It's similar to the Port's arrangements with the current residents, Alon and Cabot,” Lejeune also wrote.

The press release added that the Bobcat Energy facility owned by Spectra Energy, will use four salt dome underground storage areas that can accommodate 13 million barrels of oil. The Bobcat facility will be able to blend as many as 10 types of crude and custom-ordered oils, the press release also said.