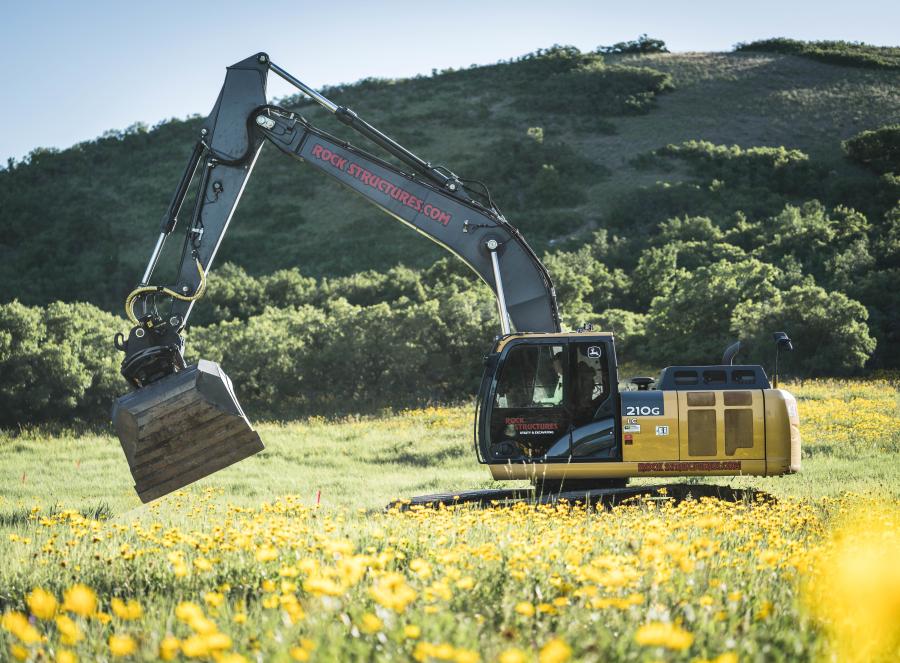 Technology for heavy equipment continues to evolve how work is done on job sites across America. Advances like machine control and GPS have dramatically improved accuracy without physically changing equipment. But what about advances to the machine itself that don't break the bank? Imagine a wrist between the stick and bucket of an excavator that enables 360-degree rotation and 45 degrees of tilt in either direction.

Virtually unlimited combinations of bucket control are no longer far-fetched due to engcon, a Swedish tiltrotator manufacturer. Having been recognized as standard on equipment in Europe for decades, engcon recently expanded its business to North America. Contractors who are focused on leveraging the latest technologies and tactics are quickly learning the benefits and blazing trails in productivity and competitiveness. Ryan Goodfellow, owner of Rock Structures Utility & Excavating, is one.

Goodfellow started his Utah-based excavation company, Rock Structures Utility & Excavating, in the late 90's as a means to escape an hourly wage. His company specializes in residential excavation and rock retaining walls, where they use a range of equipment including two John Deere 210G excavators, a Caterpillar 308E excavator, Caterpillar 259D and 289D skid steers, and a 624J John Deere loader. A majority of his company's work features complex residential basements with tight corners and footings that prove difficult to dig with a conventional machine. 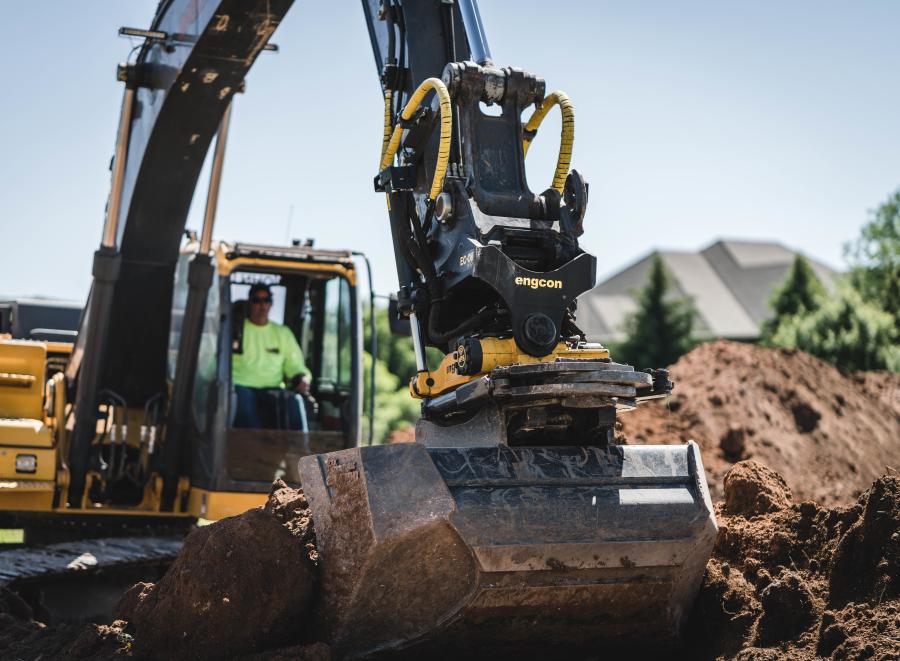 Goodfellow first noticed tiltrotators at ConExpo more than a decade ago, but quickly brushed them off as too expensive for his small grading business and worried about parts and support since the company was based in Europe. Continuously challenging excavations and retaining walls as the years went on, and experience with another hydraulic rotating grapple, caused him to reconsider. He attended ConExpo in 2017 to look for the best system for his needs. There, explored the engcon offerings and laid the groundwork for his future purchase.

"Engcon was the only manufacturer that was truly interested in what I was doing. They wanted my business and expressed a genuine interest," Goodfellow said. He added that engcon stood out from its competitors by taking the time to understand his needs and reciprocating his curiosity.

For Goodfellow, saying engcon's product is revolutionary isn't far-fetched. The ability to rotate and angle the bucket is a complete game-changer when grading and trenching. The system works in three parts — the quick coupler with EC-Oil, the tiltrotator with EC-Oil, and the attachments. Engcon's systems are designed to accommodate varying attachments ranging from buckets, to compaction tools, to sweepers. The benefits of the system extend to its flexibility and ease of use. If the tiltrotator gets in the way, say while digging or loading trucks, it's not a problem. With the push of a button inside the cab, the entire unit is disconnected, set aside, and a bucket or hydraulic equipment is attached to the end of the stick without touching a single hydraulic line.

"I can drop the tiltrotator and go right to the attachments on the end of the stick," said Goodfellow. 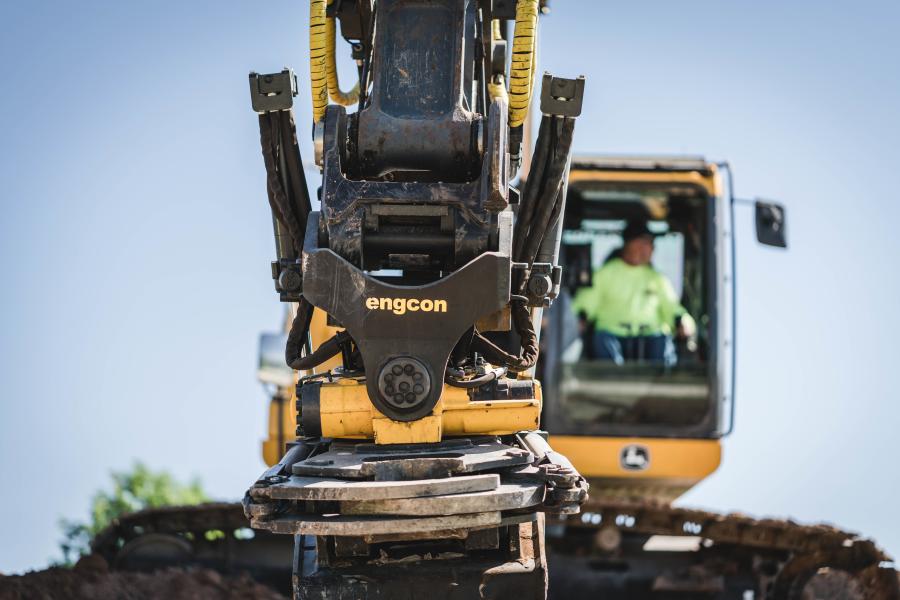 Due to engcon's EC-Oil technology, both the quick coupler and tiltrotator have built-in oil blocks that connect the hydraulic lines automatically. The system can go from tiltrotator with bucket to only bucket or any other hydraulic attachment in a few short moments. Goodfellow takes full advantage of the flexibility and removes / reattaches his tiltrotator and attachments throughout the day as he works on different aspects of a project.

After ConExpo, Goodfellow decided the purchase price was well worth the benefits and he ordered the engcon EC226 tiltrotator for his John Deere 210G excavator. The new engcon came with 24, 48, and 67 in. buckets, along with a grapple for placing rock. He's also retrofitted his compaction wheel, hoe pack and ripper to the engcon, extending the total number of attachments to seven.

The company sent a two-person team from the United States and Sweden in early 2017 to complete the install. Learning the tilt and rotate features took a few weeks to master, but Goodfellow and his team soon recognized the engcon system's benefits. 90-degree angles and fine grading basements from a single location without moving the machine are now possible and the benefits when trenching are even greater. 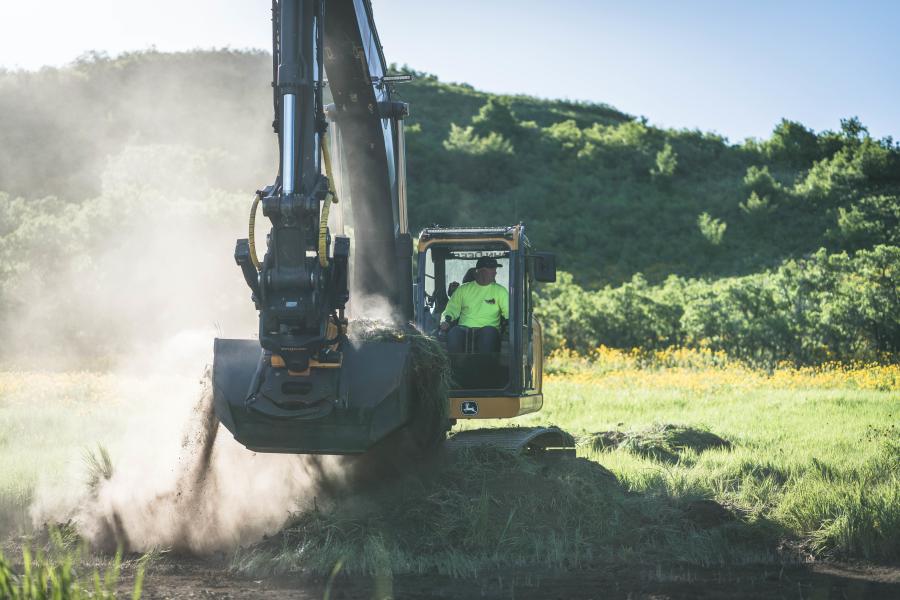 "When I'm digging utilities, I can slope the sides of the trench so it's safer for the guys. I can also dig underneath utilities sideways instead of having laborers hand-dig underneath, saving time and reducing their time in the trench," Goodfellow said.

A flexible, high-quality product and a personal, attentive approach are helping to extend to the United States engcon's long-standing reputation as a leader in tiltrotators. It goes the extra mile for its customers and designs the product to best suit their needs.

"I think tiltrotators will become standard on excavators a lot like machine guidance is currently becoming," Goodfellow said.