Contractor Specializes in the Business of Relaxation

Considering the investment his customers were putting into their pools, Campbell also started providing detailed plans for their custom creations. 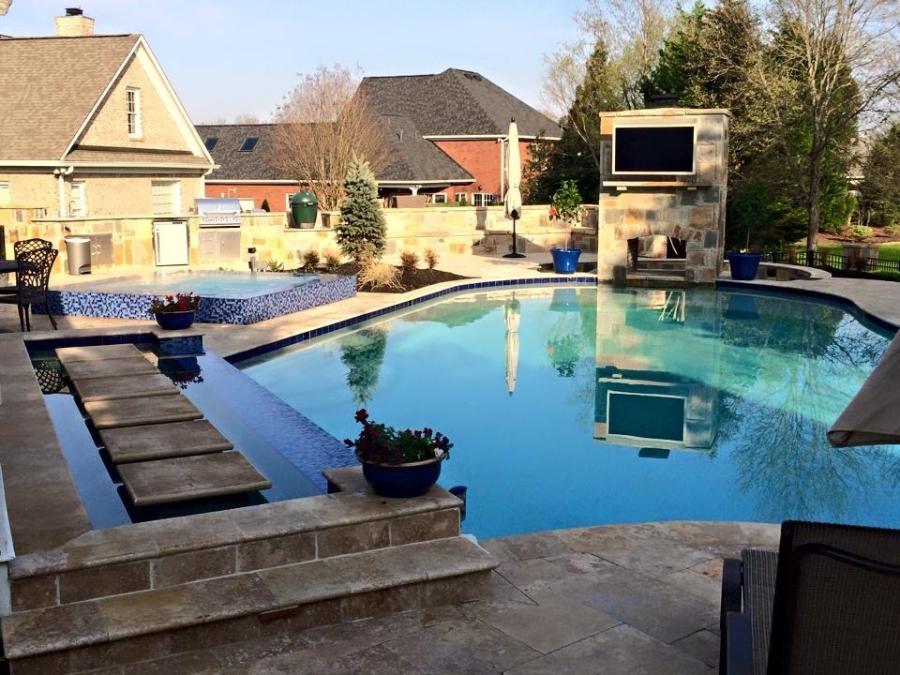 Tony Campbell is very hands-on with the business, taking charge of all the designs and outside sales.

But before assuming that means his business has declined, consider what has changed. After a few years in the business and learning more about the pool and spa industry, Campbell implemented some changes into his business strategy. Rather than trying to install a lot of smaller, standard pools, he began focusing on custom pools, spas and water features.

Considering the investment his customers were putting into their pools, Campbell also started providing detailed plans for their custom creations. Not only do customers get to see a full-scale rendering of the proposed pool, they also can view a 3-D movie of it.

“You can get very creative, and homeowners love it,” Campbell said.

He's very hands-on with the business, taking charge of all the designs and outside sales. He's often on-site, overseeing the details or even operating small construction equipment.

“I'll come out and lay the design out and set all the elevations, and I'll even dig it because I like to dig. Last year I dug all the pools,” Campbell said.

Though planning for more elaborate pools can occur during the off-season, it's during the summer that Campbell's time is devoted to his business.

“This business can consume you, but I'll also never miss my son's games. He plays football and baseball,” Campbell said.

While the pool business wasn't his first job — Campbell was in law enforcement in the early 90s — it was something he knew well. His father, Bill Campbell, started Knox Quality Pools in 1970.

Tony helped out, even going out with his father's employees to work in the field when he was 10 years old. Later on, Tony worked part-time to supplement his law enforcement income.

Shortly after the elder Campbell sold his business to a partner in 1993, Tony Campbell started Campbell's Pool & Spa in 1994. Tony's father joined him, working all the way up until six months before he died in 2010 at the age of 73.

“What was neat is that, he was the teacher when I was young, and then I started my business when I was 23,” Campbell said. “And as things turned, and the industry changed, he learned from me.”

What Tony Campbell discovered was that there were better ways to do some of the things they'd always done — the equipment and automation had evolved.

There are some challenges in the business — East Tennessee hills and red clay can be especially difficult to deal with when leveling areas and digging out pools, but after more than 20 years in the business, those challenges are routine for Campbell. His biggest hurdle today is creating a culture among his labor force that emphasizes customer service.

“Customer service is the thing I learned most from my dad. He would always go out of his way for his customers,” Campbell said.

One way he does this is by providing all the services for his designs as a package, subcontracting out the landscaping, masonry work and any other part of a project as needed.

As Campbell has changed his business, he's also changed the brand of machine he uses. Last year, he bought his first Cat machine, a 305E mini hydraulic excavator. He previously had a larger excavator that required a big truck, one that required his driver to have a commercial driver's license.

“I was the only one who had a CDL, so any time I wanted the excavator moved, I was the person who moved it. I decided that wasn't the best use of my time,” he said.

So he started shopping around, looking at brands he hadn't owned before.

His decision to buy from Caterpillar didn't rest on the quality of machine alone; Campbell also appreciated that Cat dealer Stowers Machinery sales representative Bryan Chamberlain wanted his business and was consistently available.

“Anytime I call, or I come into Stowers, I am treated like an important customer,” he said. “It is obvious that it isn't just about the machines, but about having a relationship.”

During that 90-day window called summer, that relationship can be very important, Campbell said. He can't have a machine down for repairs and in the shop when he's building pool after pool. That's another reason he chose Stowers and Caterpillar — he owns a reliable machine, with reliable service.

“The Stowers technicians are always checking the hours, checking in on the machine. I appreciate that. I'm not used to that,” he said.

After Campbell bought the mini-excavator, it wasn't long before he was shopping around for a new compact track loader. While he'd been a little concerned about using a machine with a joystick, he decided to go ahead and buy the Cat 259D compact track loader after a friend told him that the joystick is so much easier on the operator.

“It's much more ergonomic. It's like sitting in a spaceship, with all the cameras and the joystick. Once you get the feel of that, you don't want anything else,” he said.

He's also taking full advantage of the Bluetooth capabilities and the enclosed cabin of his new compact track loader.

“I can get more done when I'm in a machine with my Bluetooth and air conditioning, making calls to customers and sub-contractors, than I can when I'm in the office,” Campbell said.

This article was reprinted with permission given by Stowers Machinery Corporation.