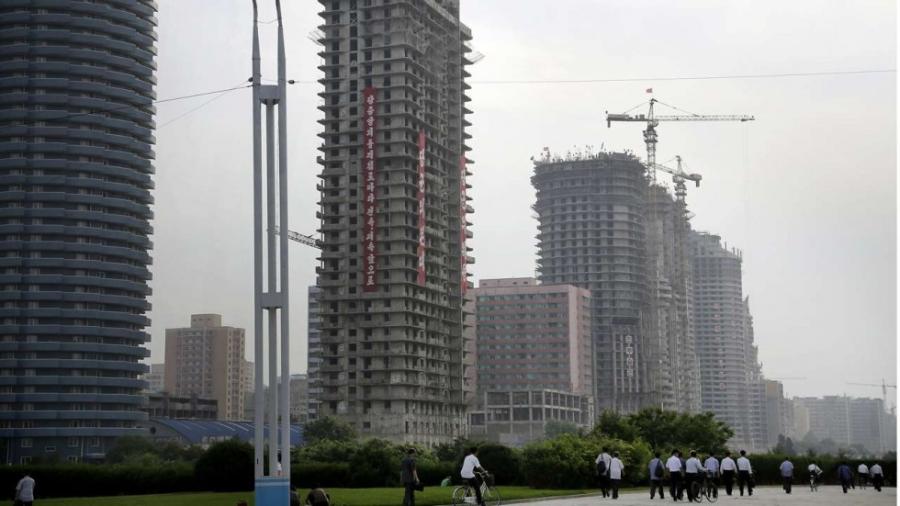 North Korean media said this week a 70-story building along a boulevard devoted to scientists was constructed in 74 days, calling the effort a "miracle."

UPI is reporting that North Korean media said this week a 70-story building along a boulevard devoted to scientists was constructed in 74 days, calling the effort a "miracle."

Ryomyong is a boulevard of high-rise buildings in Pyongyang that is dedicated to "future scientists," which includes North Koreans who made contributions to the country's nuclear weapons program.

"A dazzling miracle was accomplished," the media statement read. "Like [our] powerful missiles, the [street] is a source of strength and pride, another reason why the heads of our enemies – who try to block the progress of [North Korea] while running around with bloodshot eyes – will be rained down with showers of fire as punishment."

The speed at which construction took place, however, may be taking a toll on the working population

Radio Free Asia reported graffiti was found at the site, some of it mocking the "Pyongyang speed" ethos of hard work with scribbles that read "drug speed."

The graffiti is a criticism of the regime's provision of drugs to workers at construction sites, which are being distributed to enhance their performance, a source told RFA.

The Maeari statement appeared to be challenging the increasingly conflicting views between the people and the regime and may have been issued to emphasize loyalty.

"When [North Korean] residents see the construction project they are filled with boundless pride and confidence, while feeling a soaring sense of strength and courage," the media statement read.

Maeari also stated the speed of development would be a source of wonder, adding Ryomyong was brought to realization in less than a year.

"The day Ryomyong emerges magnificently all will marvel at the great pace of development" on the Korean peninsula.

"That is our people response to our enemies' 'high-level sanctions,'" the North Korean statement read.