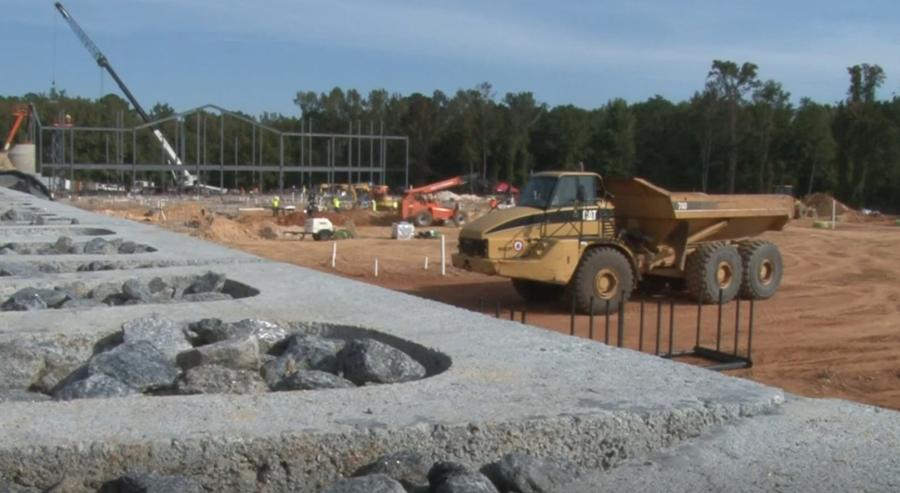 The Crawford County, Ga., school district is seeing progress on the construction of its new middle-high school building in the town of Roberta.

Crews started working on the two-story building, featuring a new gymnasium, in June, with a completion scheduled for the end of 2021. Students will move into the combination school shortly after that while their old school building is being demolished. Plans call for the entire enterprise to be finished before the 2022 school year begins that August.

School Superintendent Brent Lowe explained that the facility, west of Macon, will serve about 750 middle and high school students.

"I am very proud to have this for Crawford County," he said.

An upgrade is long overdue to the county's high school building, originally built in the 1970s.

"We were getting into situations where the piping, the plumbing and all the cast iron in the building was starting to deteriorate," he added, "and we were looking at a major modification with very limited state funds to go towards that modification."

The $33 million project is covered by monies from the state and from county bonds.

The general contractor for the new Crawford County school is Parrish Construction Group, with offices in nearby Perry and in Atlanta. The contractor is one of Georgia's premier builders and within its portfolio are many schools and university facilities.

Alex Fant, the project manager of Parrish Construction at the site, described the work as a two-phased effort.

"We are set to have the new school finished by December 2021, after which they will move into the facility," he said. "Phase 2 of the work will be demolishing the old school that's now being used and build some new parking lots for them."

Lowe said the new brick middle- and high-school will be brick, adding, "We'll have a standing seam metal roof; we're going to get away from the flat roofs. Our gym will be a state of the art, two-story building."

The Crawford County middle school will occupy the left wing of the new building and the high school will be on the right.

Lowe emphasized the designs for the two schools were done so that students from each facility will be kept separate. The building will have retractable walls in common areas like the cafeteria to keep the middle- and high-schoolers apart.

"It's a middle-high combo with separate areas for both. I always want to state that, because that was a concern. Our kids will not be mingling."

The renovation project is the first the district has seen since the early 2000s when parts of the middle school were upgraded.

Lowe said the school improvements are "a big deal" for the small, rural county.

"It's going to be a pretty building. It'll be something the town of Roberta is going to be proud of," he added.