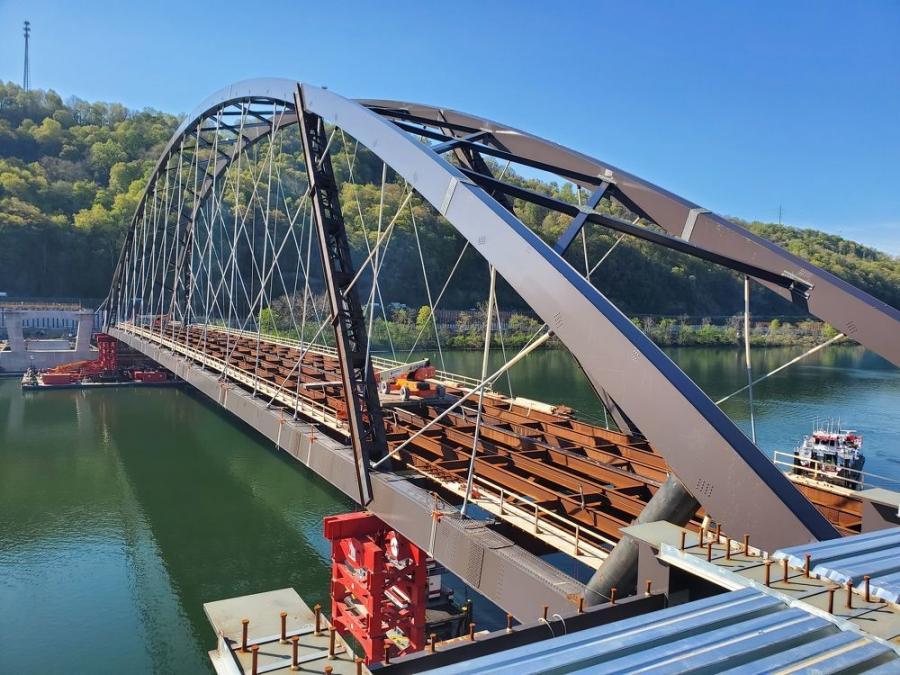 A pair of barges was used on each end of the bridge, with a total of four barges. Three tugboats were used to float the bridge down the river.

A bridge spanning the Ohio River and serving as a primary connection between the communities of Wellsburg, W. Va., and Brilliant, Ohio, was constructed off site and floated into place at the end of April.

The $131 million Wellsburg Bridge is the first alternative delivery project in the state of West Virginia. 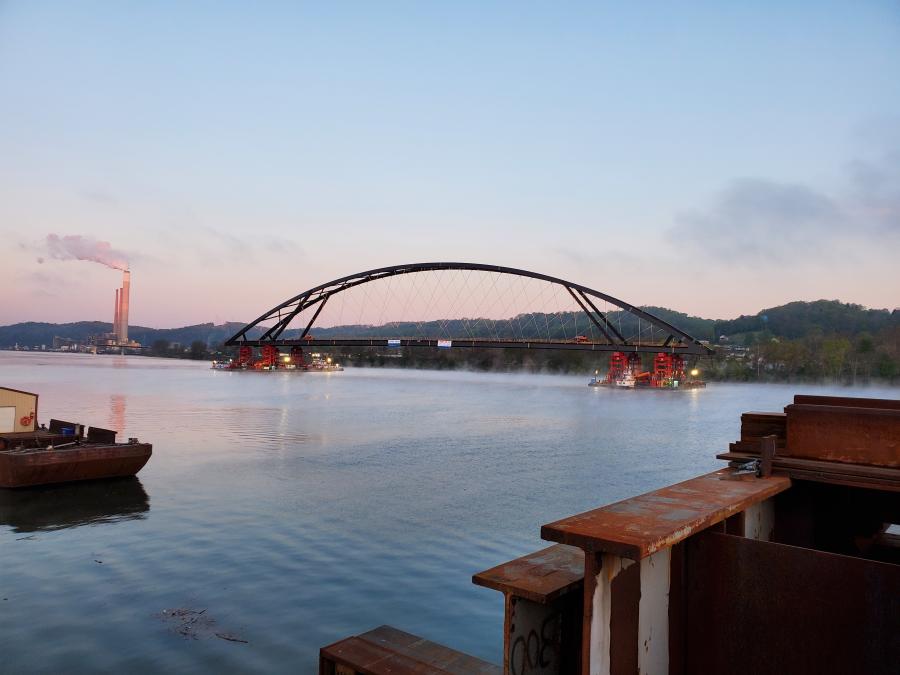 Under the direction of the West Virginia Department of Transportation (WVDOT), the project was awarded to prime contractor Flatiron, based in Colorado.

Tony Clark, District 6 engineer/manager of WVDOT, reported that constructing the main span upstream and floating it down the river was the contractor's choice.

"We definitely didn't go into it specifying that they had to do it this way," he said. "That's the way they elected to do it. They said this is how we're going to do it and at the end of the day as long as we've got a bridge from one side to the other, how they get there is ultimately up to them in a lot of instances."

Clark reported that his department has not seen something similar before.

"We've had instances with accelerated bridge construction where we've constructed something very much closer, like immediately adjacent to the current bridge and slid it over in place, but nothing where it's been constructed over a mile upstream and floated down in," he said. "That's definitely new for us."

The main span and the arch were constructed using temporary shoring towers upstream at an assembly yard. According to Clark, the advantage was that they could use relatively small equipment with minimal impact, especially to the river.

"The Ohio River, as far as barge traffic, hauling material up and down is one of the most highly traveled rivers in that aspect in the country, I believe," he said. "So, the benefit there is that they wouldn't have any sort of restrictions as far as access to the structure due to the constraints of the river, plus the safety of the crew and everything. They assembled it on temporary shoring up-river and then they floated barges in and jacked it up on those barges and floated it downstream and further jacked it up and slid it over into place. That's the long and short of it."

Mammoet handled the move of the bridge from where it was assembled to the bridge site and the placement.

"Even though they were only there for two days, it was significant work that I don't think anybody else could have done," Clark said.

"For the move itself, Mammoet used what's referred to as their mega jack system," Clark said. "Basically, to me, Lincoln Logs is a good analogy for it. They have these cassettes. They jack up the bridge and slide a pair of cassettes under and lower it down on them, then pick up a lower spot with the jack, jack that up and slide more cassettes in at 90 degrees to each other so they were just building a stack just like Lincoln logs. It's their mega jack system." 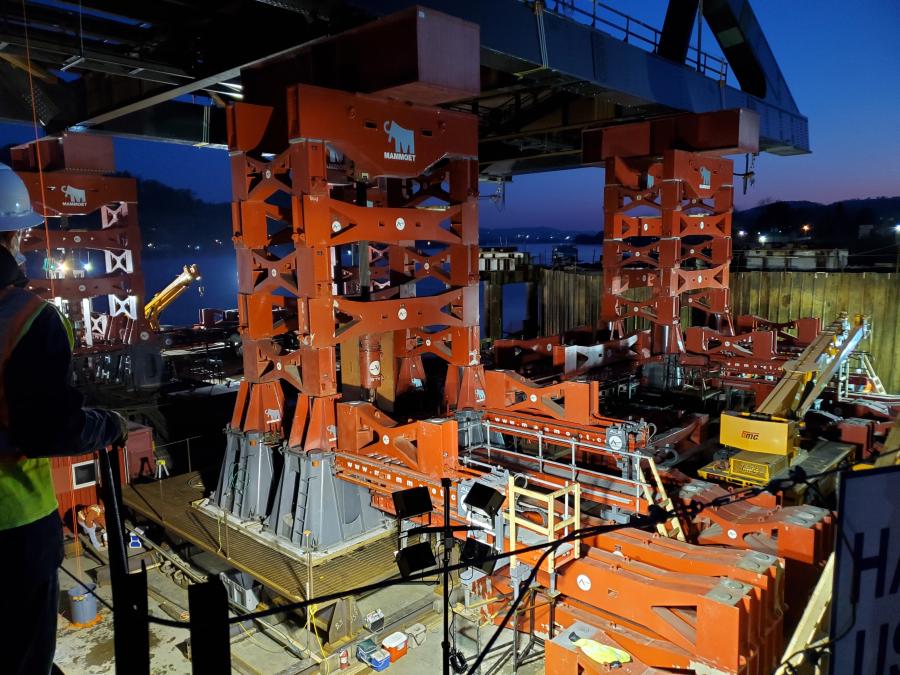 In addition, a pair of barges was used on each end of the bridge, with a total of four barges. Three tugboats were used to float the bridge down the river.

Work began shortly after 6 a.m. on April 26 and the bridge was floated down river in approximately 3 hours. About 10 hours were spent getting the span in place, finishing up around 7:30 p.m.

There were some changes to the schedule, with the original plan being to do the work the week before. When the work finally began, the interest was high.

"Several people from the community turned out and I know we had a livestream on our website, and some of the local news stations had a continuous camera running while they were doing that kind of work and there were several people watching the camera feed as well," Clark said. "As far as the move itself, really it went off pretty much without a hitch. A few little hiccups here and there, but generally it was pretty uneventful as far as problems, which is always a good thing."

Clark reported that he believes the main span arch is the longest basket handle tied arch in the country.

"The arch leans in toward the top," he said. "Instead of the sides of the arch being vertical, if you look at the end of the bridge like you're crossing it, they lean in toward the top, like the handle of a basket. An arch bridge has to have a place on either side for the forces of that arch to go down into. There has to be something to resist that force and it's usually some sort of a big chunk of concrete or something on that end. Well, on a tied arch, they connect both ends of that arch together so you can do this kind of move and we can have this sort of a structure spanning the river, not having to tie it back into the bank on either side."

Clark reported that the design-build project began on Oct. 25, 2016, with ground being broken in July 2018. The current projected completion date is Oct. 7, 2022. Ryan Buckley serves as the superintendent.

The bridge connects WV 2 and Ohio Route 7. According to Clark, the bridge has been requested and pushed by the local planning organizations and different groups in the area, both for economic development on both sides of the river in addition to providing some additional redundancy.

"We've got a bridge in Wheeling and just north of that in Weirton, but this is about right in between," Clark said. "If we have any issues with either of those structures that requires reducing them or closing them, this just provides another way across."

Clark reported that the biggest challenge over the past year, as with many other areas, has been the pandemic, both with labor and with getting materials to and from the site. 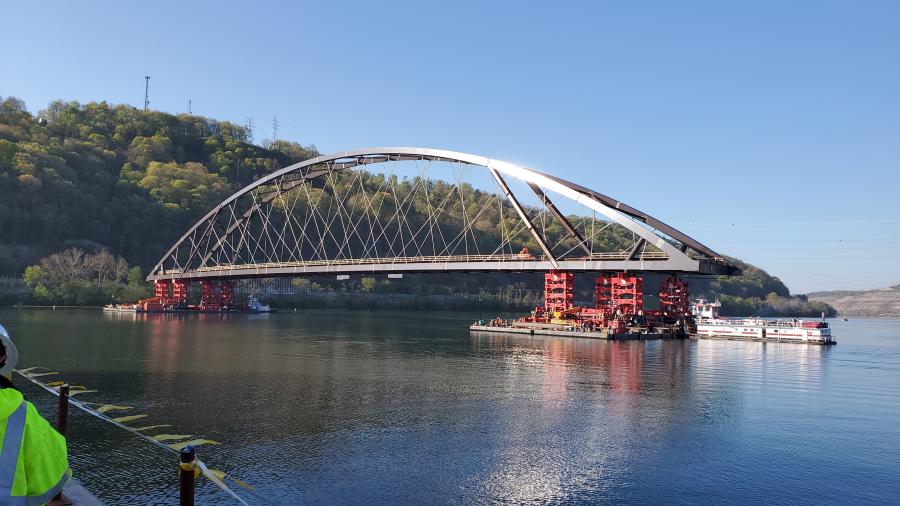 "Another big challenge for the project, in general, is the site geography on the West Virginia side," he said. "We've got two lane WV 2 that basically drops down to a rail trail beneath it and then there's a pretty steep hillside that goes up above it. So, part of the project is a large retaining wall to kind of shift that alignment of WV 2 and create a third lane to be able to provide access to the bridge without interrupting traffic flow. That's been somewhat challenging."

He also noted that part of that retaining wall will extend down and provide an opening to access the rail trail beneath it so bikes and pedestrians can come up onto the bridge.

"There will be a shared use lane for bikes and pedestrians to cross the river at this area, too," he said. "Most of our major river crossings are interstates or really high traffic flow routes that aren't really conducive to bicycles or pedestrians crossing, so this will provide an opportunity for them to cross."

Major subcontractors include Triton Construction of West Virginia for backfill work and Geottle of Ohio for the large retaining wall on the West Virginia side, which measured 4,180 ft. in length and involved 198,000 cu. yds. of backfill.

Equipment for the job has included various dozers, excavators and Manitowoc crawler cranes, including a 2250.

At any given time, there are typically well over 100 people working at the site, depending on the workload. During the move, Clark said there were probably 200 crew members. CEG