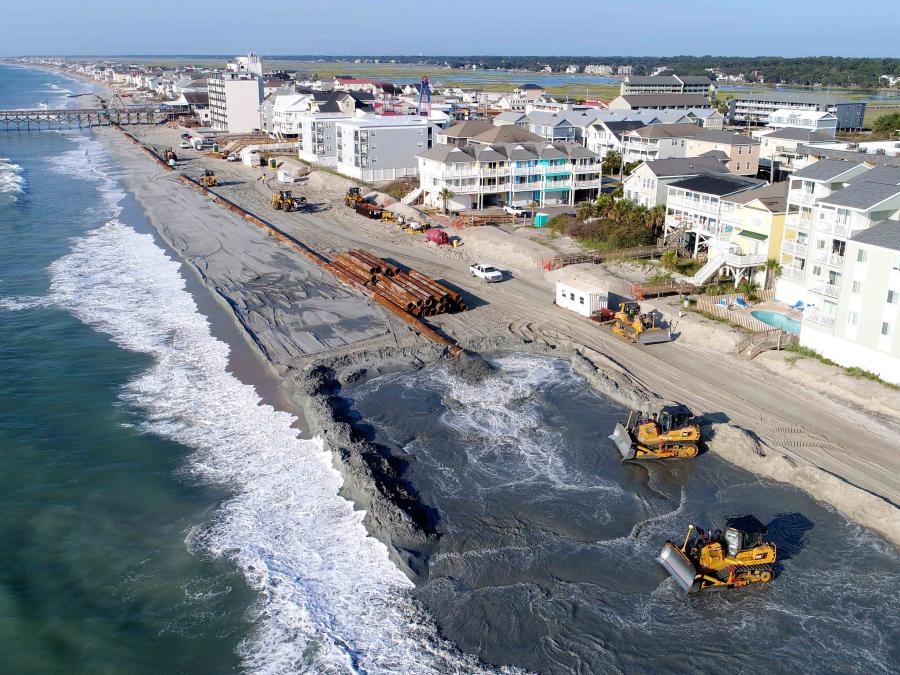 In addition to causing serious damage to many communities in the Carolinas, Hurricanes Matthew (2016), Irma (2017) and Florence (2018) were responsible for considerable destruction to the beaches in several communities throughout South Carolina that rely on local, regional and national tourism. The Army Corps of Engineers, via its Federal Emergency Funding Account, invested close to $86 million for beach renourishment projects to repair the damage. 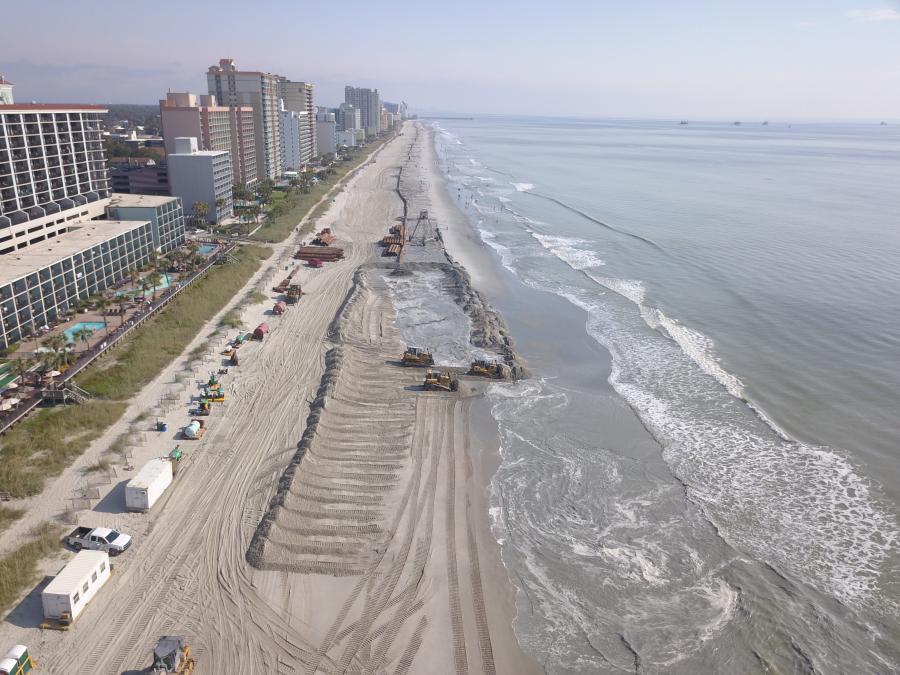 "There's a huge economic factor to all of this," said Wes Wilson, the Corps' project manager, Charleston District. "Myrtle Beach is one of the top economic machines for tourism on the East Coast during the summer time. Without a beach serving the tourism sector, there would be no infrastructure to protect. We're happy to be involved in this from a federal standpoint to provide that value to South Carolina and the nation.

"South Carolina has weathered several major storms over the last several years," he added. "Through each storm, the beach renourishments have done their job of protecting the people, homes and businesses beyond the beaches."

The projects also had local partners that worked with the Corps to ensure local cooperation and coordination. 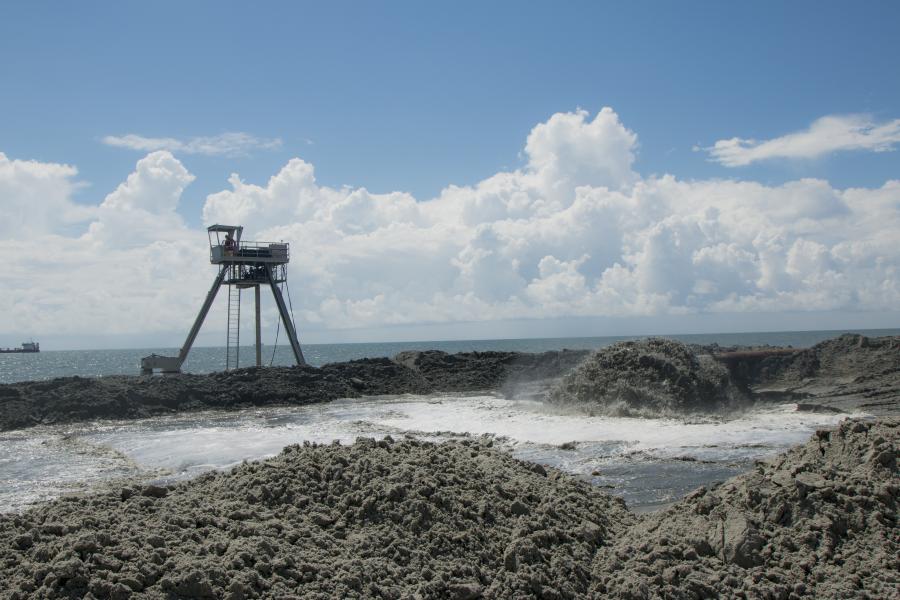 "Within that 26 miles of coastline along the Grand Strand, the Corps returned approximately 4.2 million cubic yards of sand, which is the equivalent to 420,000 dump trucks," Wilson said. "Each storm event ate away at the sacrificial berms that provide protection for the infrastructure, the dunes, behind the beach. The storms eroded the beach until you're left with the dune system, and once the storms start eating into the dunes, you leave the infrastructure behind them at risk for damage during future storm events."

The sacrificial berm is the beach area that is adjacent to the water, where people swim and set up umbrellas, place blankets, etc. The work, completed last May, has restored the beaches. On average, beaches in the area are renourished every eight years. Routine renourishment projects cost about $30 million and require two million cubic yards of sand."

"A major challenge is that the material we place on the beach has to come from an off-shore borrow area, so there is extensive geotechnical work that takes place prior to bringing beach quality sand to the shore," Wilson explained. "You don't know what is on the bottom of the ocean floor and there's only so much geotechnical work that can be done, so at the end of the day, we use our engineering scientific judgment and we collected pretty good sand in the last couple of summers. The borrow areas are, on average, two to four miles off-shore and they transport the sand via a hopper dredge. Great Lakes has done a great job working with us on the project." 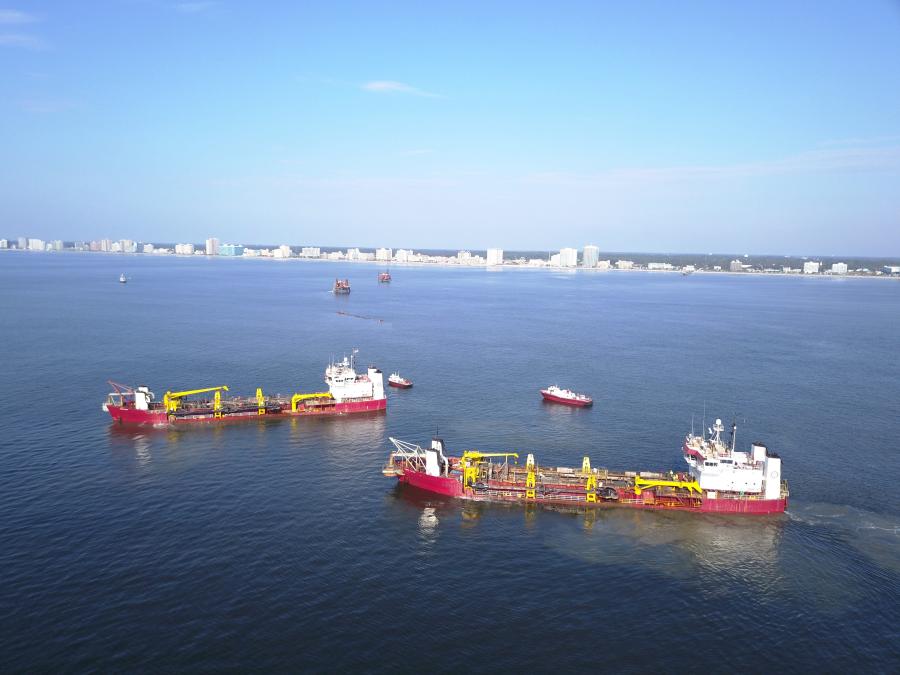 For the Myrtle Beach area projects, GDLL brought in hopper dredges (ships) that sucked up sand from the bottom and then sailed to a pump to a mooring buoy, where the sand was then pumped to the shore by an underwater metal pipeline. Once on-shore, dozers spread the sand to restore the beaches and the dunes based on the proper elevations and heights.

Folly Beach was renourished in 2014 as part of a 50-year agreement with the city — the first periodic renourishment the beach received since 2005. This particular project placed 1.4 million cu. yds. of sand along 5.34 mi. of beach, which cost $30 million.

Marinex completed its work at Folly Beach in December 2018, having started six months prior. Its crews placed approximately 1.3 million cu. yds. of sand on the beach, or about 130,000 dump truck loads. For their work, Marinex used a cutterhead pipeline dredge that sits atop a borrow area, pulling up the sand and pumping it directly onto the beach via elbow pipe segments at the bottom of the ocean.

"The damage to Folly Beach was pretty bad," Wilson stated. "The storms ate away into the dunes and water was topping the dunes, getting into the streets and residential and commercial areas of downtown Folly Beach." 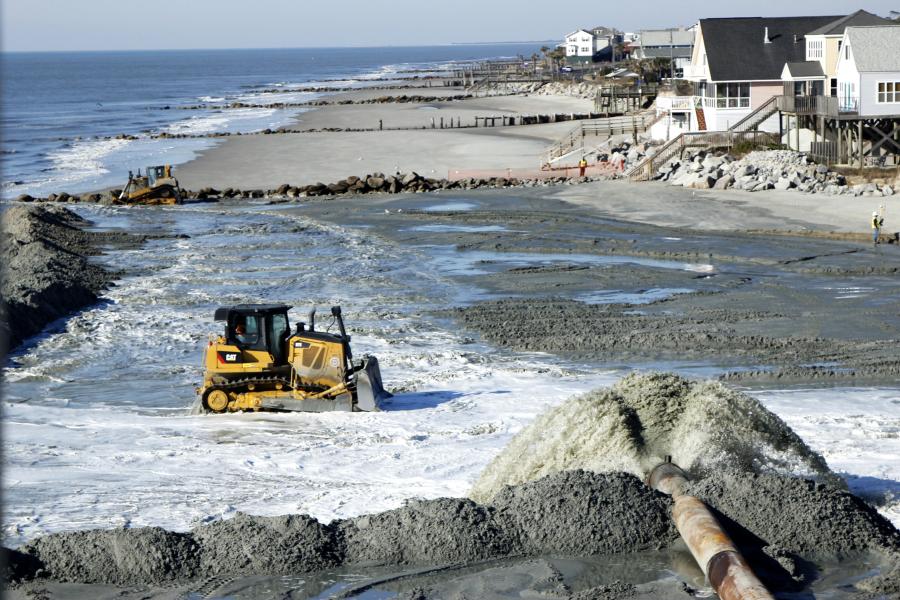 Marinex kept sections of the beach open during construction, which went on 24/7 when conditions permitted such operations. The beach was divided into 1,000-foot-long sections, with crossovers put in place over the pipes that allowed beachgoers to access the open areas.

"They usually completed up to a few hundred feet per day, barring mechanical or weather/sea condition delays," said Wilson, who added that the city, in partnership with the state of South Carolina, conducted a separate but concurrent rehabilitation project between 8th to 13th Street East. "This project also provided the District with the unique opportunity to dredge the Folly River Federal Navigation Channel."

"There's a lot of seawalls in Folly already, and the city on its own helped maintain some of the materials placed north of the pier," Wilson said. "The Folly Beach project was a beneficial use project. Not only did we place material on the beach, but also at Bird Key Stono Heritage Preserve, a 35-acre protected bird sanctuary that is home to many piping plovers. It was eroded due to the storms and we were able to place 40,000 cubic yards of material to restore it. The environmental folks in our region and the city were happy because they wanted to protect the bird habitat."

"This project was a win-win," said environmental engineer Alan Shirey. "We were able to be good stewards of taxpayers' money since pumping the dredged material onto Bird Key was the cheapest way to dispose of material and protect the environment by increasing the footprint of Bird Key."

Hurricanes impacted not only the work itself, but also the awarding of the renourishment contracts. As the funding for the Folly Beach project was being made public to repair the damage from Matthew, Irma hit the area and its destruction was tacked on to the contract. 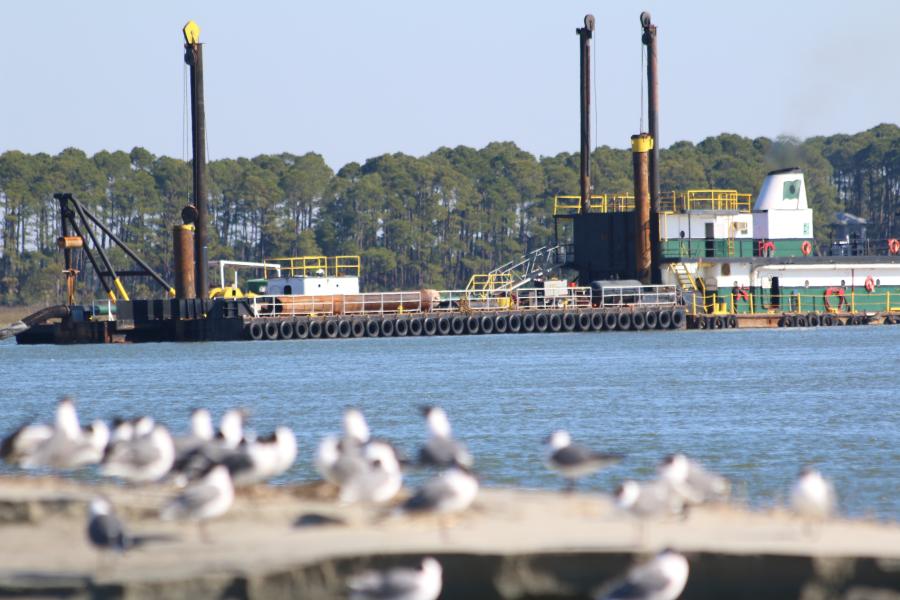 "Marinex had to stop its work for a while due to Florence and we had to update the contract to include its damages," Wilson said. "The company already had its equipment there and we were able to stave off a significant mobilization aspect. It was a similar story for Myrtle Beach as well. Every time Great Lakes was out there, there was a bad storm at some point."

Chris Pomfret, Great Lakes' senior project manager, was well aware of the challenges when his crews swung into action in 2018.

"We ran into a couple of hurricanes in our first season and we had to demobilize off the beach because of a few near misses," Pomfret said. "We completely demobilized for Florence. We sent the hopper dredges to the inner harbor at Charleston and brought the boosters inside the Little River Inlet, jacking them up. We also had a couple of tugboats standing by in case things got hairy. We were lucky because we got the backside of the storm and a lot of the wind was pushing off-shore instead of onshore for us."

Crews were working full day shifts whenever possible, and it took several weeks to set up and demobilize operations at various sites. The final GLDD operations occurred at North Myrtle Beach in Reach No. 1, and lastly Surfside Beach, south into Georgetown County of Reach No. 3. People who witnessed the operations saw a large array of bulldozers, pipes and dredges off-shore unloading their cargos. As noted, the work areas usually covered 1,000 linear ft. of beach and were fenced off.

"The last two portions that we completed were the furthest south and furthest north, which were not nourished the previous two seasons," Pomfret said.

Each operation had two hopper dredges, which had one collecting sand and the other pumping sand onto the beach. A hopper dredge is a self-contained ship that has arms over the side that look like big vacuum cleaner heads.

"The heads drag the bottom and put the sand into the hopper," Pomfret explained. "After the sand settles in the hopper, the excess water runs off. Once the hopper is full, the dredge proceeds to a cube, a floating transport system anchored to the bottom, where the dredge then connects to a floating hose linked to a submerged pipeline that runs to the shore. Our subline pipe lengths ran from 2,500 to 5,500 feet." 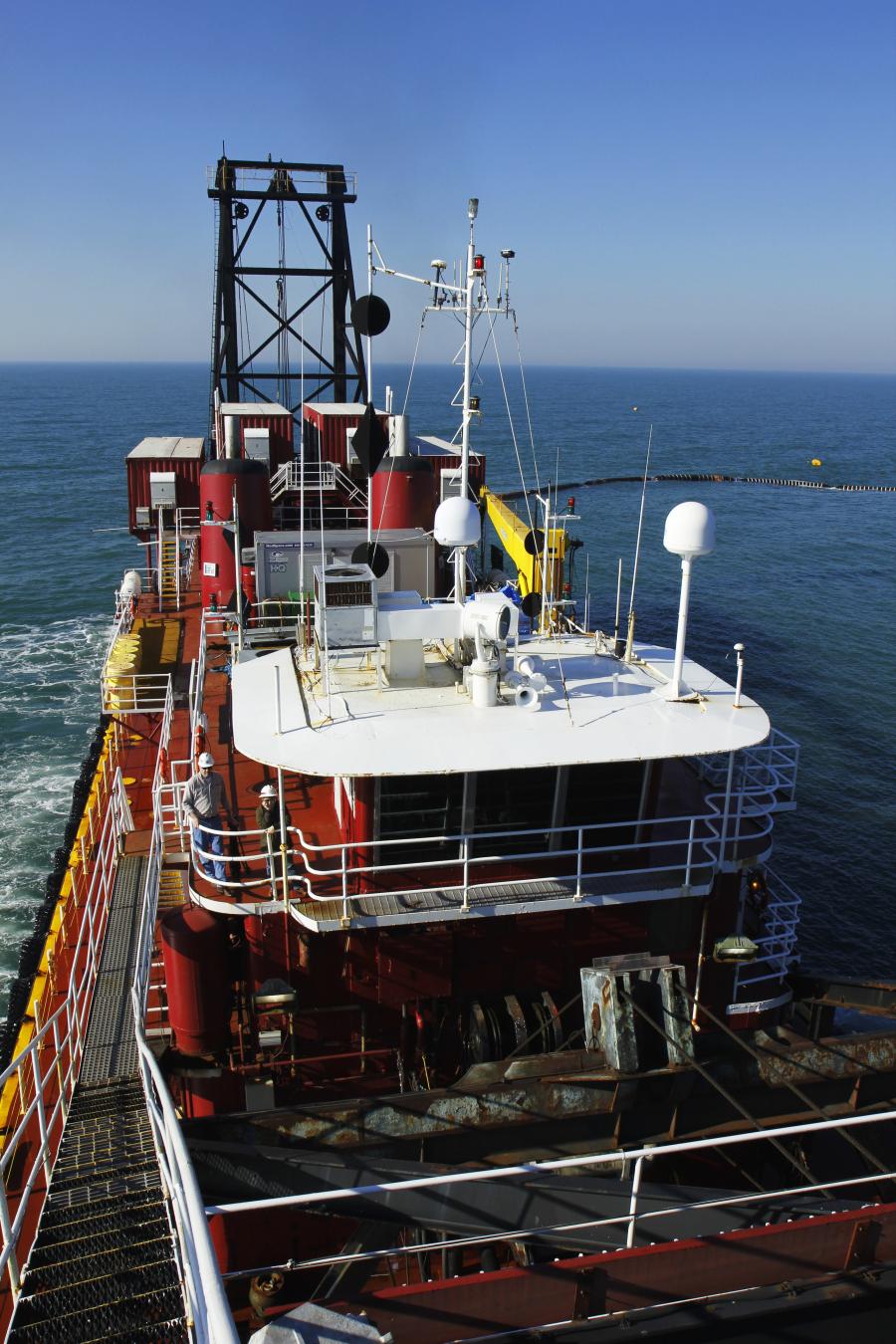 "The sister ships were both the same size and we got into a nice cycle where you had almost continuous pumping onto the beach," he continued, noting that the dredges had been built more than 30 years ago at Southern Shipbuilding in Los Angeles for GLDD in a joint-venture with another company. "They were built for work in the United States and serve this segment of the market."

GLDD had up to 96 personnel on site for ship board and on-shore operations. Divers were not required for the operations as 500-ft.-long sections of ball and bell jointed 30-in. diameter pipes, connected by locking rings and gaskets, were floated and sunk along the paths that were mapped out. A compressor bar was used to sink and float these long pipe sections.

"We're still blanking and wrapping the pipeline sections for the next projects and should be gone from the area shortly," Pomfret said.

The engines and below deck equipment (pumps, etc.) on the dredges are maintained by the chief engineer and the engine department crews.

"There are quite a few engines on board each dredge," Pomfret said, "and a lot of checking and changing of oils and filters, and watching of temperatures and pressures. Then you have the deck department that handles most of the top side and pipe work repairs, the navigation and production systems, and actual steerage of the vessel."

For the past few years, GLDD has been using RAM — Reliability Assured Maintenance — to schedule and time maintenance. "You want to plan your downtime rather than work something until it completely shuts down," Pomfret said. "Then you are potentially caught without proper tools, parts and personnel to do the repairs. Utilizing RAM, we find we are less apt to get caught with additional time loss and manpower costs."

"The local Caterpillar shop supports repairs and testing of oils and other preventative maintenance that needs to be done," Pomfret said. "In such operations, we're constantly running the dozers in very difficult sand and salt water conditions, and we get a pretty good reliability with the local Cat dealerships. There is nothing more frustrating than having five dozers on site and only two running." 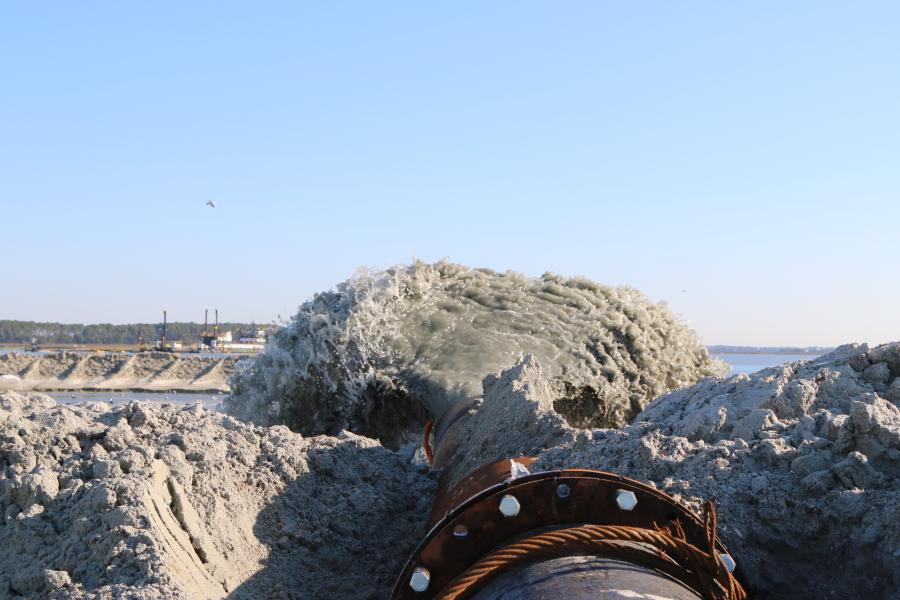 Ensuring that the beach template grades were attained was crucial for the beach rehabilitation operation.

"We were building berm and berm slope that ran into the water on a one on 20 slope," Pomfret said. "Instead of using grade stakes, the old-fashioned way that required a ton of labor and metal conduit so the dozer operators could visually see the beach template they were filling, we've gone to RTK GPS positioning for the dozers. This way we don't have to go back to find lost or broken stakes that could be hazardous to swimmers or surfers. We just input an electronic template into the dozers and the operators can see what elevation needs to be laid at all times — it's much safer and quicker to make beach template changes."

In terms of service vendors, GLDD brought in Seismic Surveys Inc. to monitor vibrations created by the dozers on the beach and dunes to ensure that all work was within acceptable vibration limits. REMSA performed all of the wildlife and endangered species monitoring and GBA (Gahagan & Bryant Associates) performed the on site PLS survey work and oversee the final survey products provided to the Corps. CEG