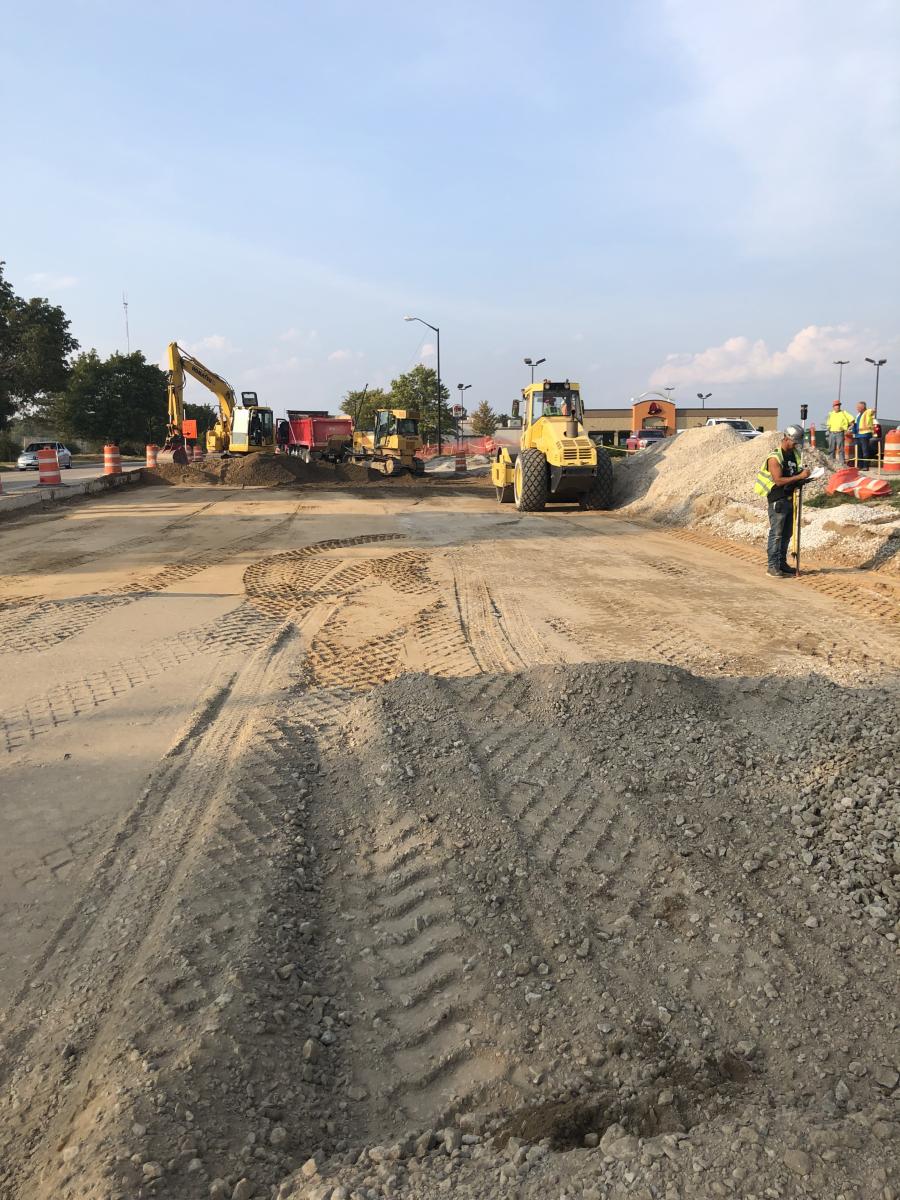 The city of Akron is investing $12.8 million to reconstruct a 1.5-mi. section of Romig Road. (The Ruhlin Company photo)

The city of Akron is investing $12.8 million to reconstruct a 1.5-mi. section of Romig Road, a north-south four-lane, concrete paved artery, from Vernon Odom Boulevard in Akron to Central Avenue in Barberton, close to I-76.

The road, built 45 years ago, is the main thoroughfare in the Rolling Acres Shopping District and is used by many residents in the nearby Akron neighborhoods of West Akron, Lane-Wooster, Kenmore and residents of the city of Barbeton. It is being rebuilt as part of an ongoing renewal for the shopping district that had seen better years when it was home to several malls and big box store outlets. 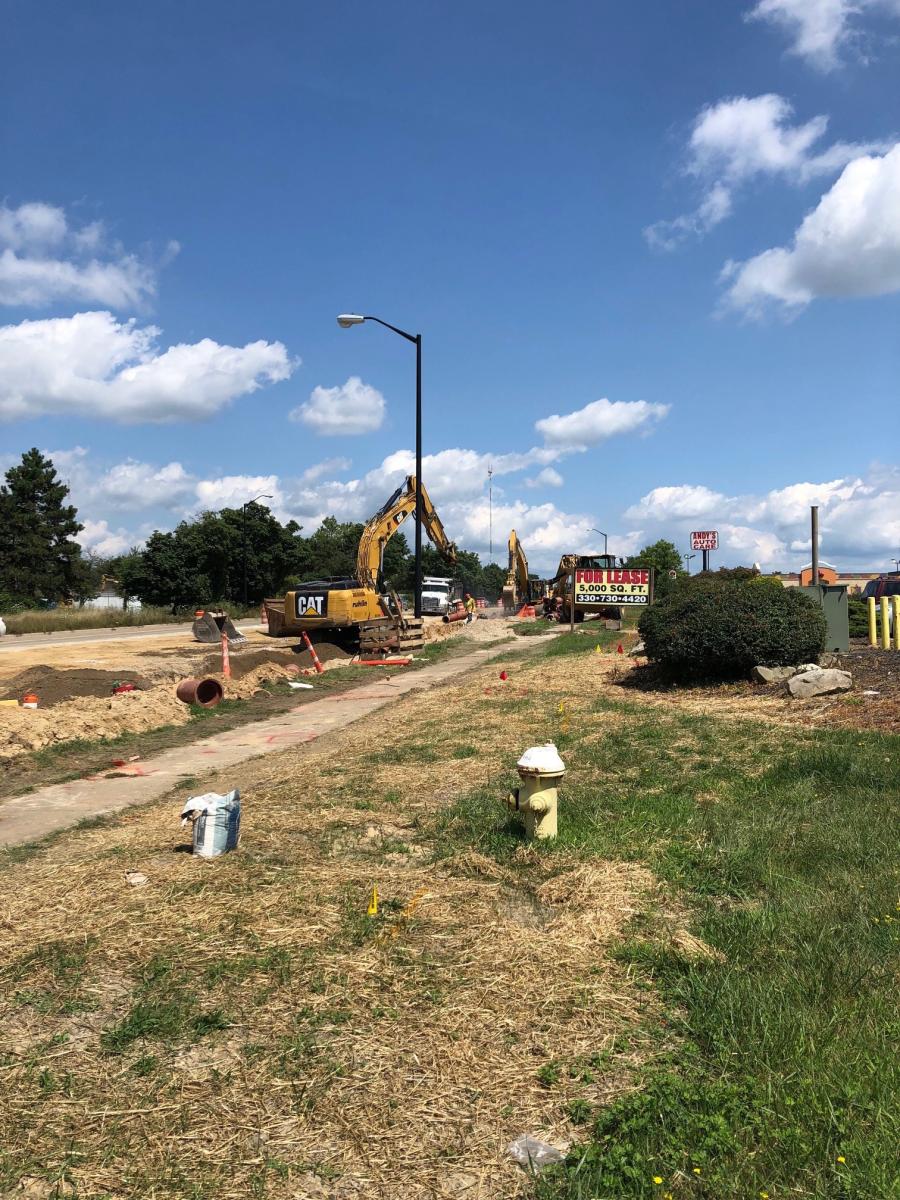 The road project, awarded to The Ruhlin Company, started on June 21 and should be completed on May 4, 2020. Since ground was broken, Ruhlin crews have been pressing forward and are meeting benchmarks.

Construction for a $100 million, 2.7 million-sq. ft. Amazon distribution warehouse, to be built by the Whiting-Turner Contracting Company on the old Rolling Acres Mall site, is expected to begin this fall.

The city acquired 67 acres of the 107-acre mall property through foreclosure, and it has sold the site to Amazon. The remaining land, privately owned, also was acquired. The four-story facility, according to the local media, might be operational in late 2020 and will be equipped with a state-of-the-art sorting system and various automated systems.

On July 22 an Amazon spokesperson told the Akron Beacon Journal that: "One of our primary factors that go into our thought process on where to place a new fulfillment center is location. We're responding to customer demand and want to make sure our fulfillment centers are close to customers so we can offer great Prime service and fast shipping speeds. We also strategically look for locations that provide robust public infrastructure, a strong, dedicated workforce and great local support — and we've found all those factors in Akron, Ohio."

The facility is expected to employ approximately 1,500 people when the building is delivered.

Akron Mayor Dan Horrigan, when interviewed by the Akron Beacon Journal, said: "In Akron we have a proud history of innovation, resiliency and reinventing ourselves to meet the changing demands of a dynamic economy. We are thrilled to welcome Amazon to Akron, to transform this once blighted property into a thriving logistics and distribution hub. This is the single largest job-creating project we have undertaken in a generation. We look forward to continuing to partner with Amazon to empower the Akron community with employment, education and skills training opportunities."

Part of the reason for the road project is to ensure that Romig can handle trucks carrying heavy loads. The city also is updating two ramps, one for I-76 to the south and the other, I-77 to the north.

The road upgrade was designed by the Environmental Design Group (EDG). 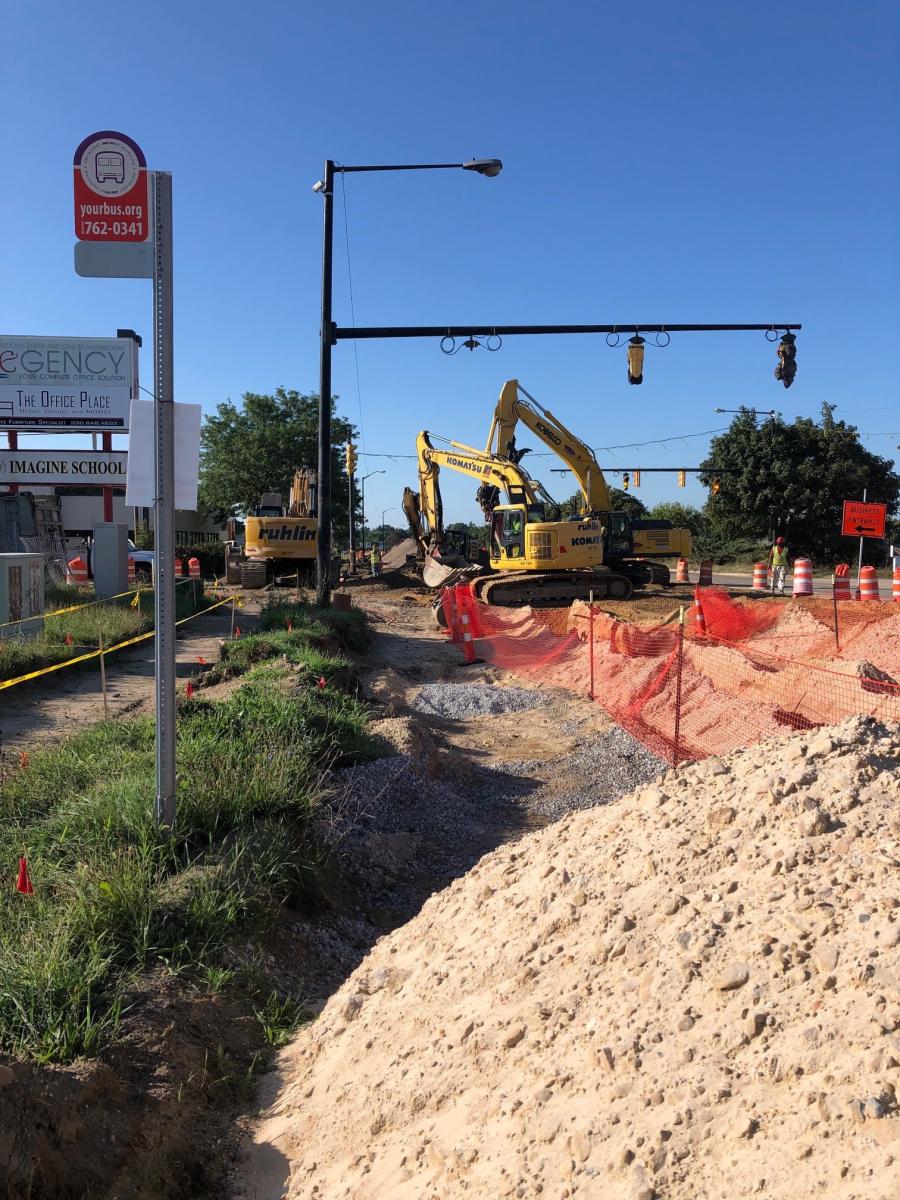 "Limited working space is a challenge," he said. "It's tight working quarters, and we have to maintain access to the businesses and some of the residences and apartment complexes along the street. We have to do a lot of coordination with the businesses and residents. There are a lot of utilities to deal with and multiple conflicts. Dominion Energy and the city have been great partners, and we've been working through the conflicts. Dominion is handling the gas line relocations and we're doing storm, water, and sanitary work.

"Issues can be dealt with very quickly with the Environmental Design Group and the city," he added. "The city's onsite management and project manager, Jason Zajac are readily available. We make joint-decisions quickly to keep the project moving forward."

The general contractor has leased some space to set up lay down yards. Parts of the closed northbound roadway also are being used for the storage of materials, which are being delivered on "as needed" basis.

This has been a fast-paced project from the start.

"It's kind of a work in progress with the city and the EDG to put the schedule together," said Ruhlin. "We knew the direction that we were going in, but it's still a living and breathing document — we continue to tweak it as the job goes along."

The reconstruction started with the northbound lanes, with traffic shifted to the southbound lanes to create a safe working space for the crews. The existing subgrade is being retained.

"We're placing 304 on top of the subgrade and then placing the roadway on top of that," said Ruhlin, who noted that the concrete surface and 304 has been removed on the northbound side. "We removed it with excavators and we have a pavement impactor that we tow behind a tractor that was used to fracture the old pavement.

"We had a nearby location where we crushed the material."

The water and sanitary sewers and the storm infrastructure are located on the northbound side and are being installed simultaneously as the new pavement is being laid down.

"They bring a lot of roadway and city street experience to the table — working in urban settings with a lot of utility and underground relocation," said Ruhlin. "They are all very adept at coordinating with many public entities and they communicate well with each other, thus keeping the project on track."

Peak days will see 55 Ruhlin and subcontractor employees on site. The subcontractors include: Thompson Electric for signals and lighting, Vito Gironda for sidewalks and driveways, and Granite Inliner for cast-in-place lining,

"The concrete will be recycled on site to create a 304 aggregate base," said Licitri. 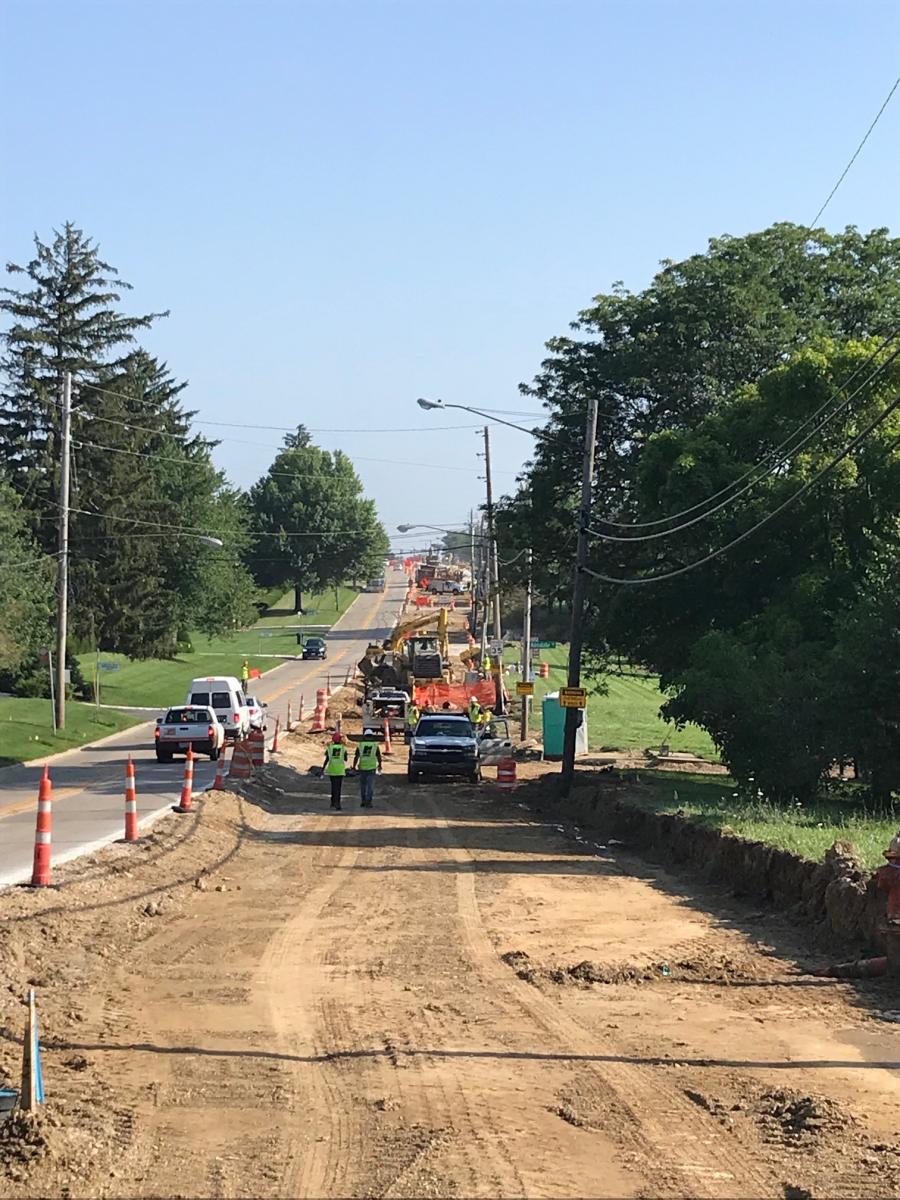 Normal wear and tear issues are handled by Ruhlin mechanics and with the company's shop/yard only 20 minutes away, they can be on site rapidly.

"It's the usual maintenance items when you're digging sanitary sewers that are 15 feet deep, pulling boxes, and excavating rock," said Ruhlin. "You have your fair share of breakdowns with the equipment. The mechanics respond quickly to any equipment issues and have us back and running, minimizing the down time."

In the last year the company has purchased three Komatsu vehicles — a 238 excavator, a loader and a D61 dozer. It also has acquired a Cat 336 excavator.

"Our dozers and graders have GPS and UTS robotic guided systems on them," said Ruhlin.

Fast-tracked operations are never easy, and for Ruhlin, the first step was to assemble a quality team to manage the project.

"The next step is early procurement of materials — making sure that all necessary subcontractors and suppliers were on board with the knowledge of what is required from them, as well as getting things into fabrication as soon as possible," he said. "Quick coordination with the owner and design team is essential, and we have it on this project, which made it possible to begin production rapidly." CEG