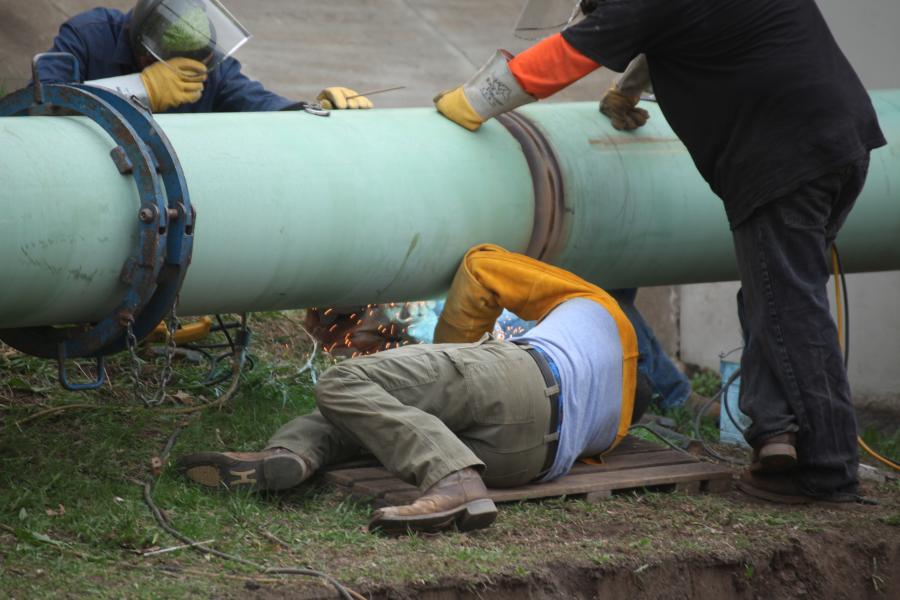 With three years and 9.2 mi. (14.8 km) behind them, pipe crews are into their final year of replacing 11.5 mi (18.5 km) of high pressure distribution gas main through the streets of St. Paul, Minn., and its suburban neighbor to the north, Roseville.

Along with the pipe work, the local water utility jumped into the project in 2015, the third construction season, to replace a water main stretching over two dozen city blocks.

Owned and operated by Xcel Energy, a regional natural gas provider for this part of the country, the new, 20-in. (50.8 cm) steel main operating at 175 psi is replacing the original compression coupled pipe buried underground more than 60 years ago.

The new main, made up of 40 ft. (12.2 m) sections of stronger, steel pipe welded together will keep its maintenance in step with new federal code requirements, said Conrad Miller P.E., Xcel senior engineer.

This benefit, coupled with advanced assessment technology will “ensure the integrity and reliability of the system which is the backbone of the gas delivery system in the East Metro area of St. Paul, serving around 100,000 homes and businesses,” according to an Xcel Energy publicity handout.

Advanced assessment technology includes the installation of remote control valves to improve gas delivery efficiency, especially during peak usage. The valves also will give system operators greater capability to isolate a section of the main in the event of an emergency to reduce gas supply disruption to their customers.

Xcel Energy, based out of Minnesota, is an electrical and gas utility serving 5.5 million customers in Minnesota, Michigan, Wisconsin, Colorado, the Dakotas and Texas.

Q3 Contracting based in Little Canada, Minn., took on the $69 million gas main project. The company is a division of Primoris Services Corporation, a publicly owned and operated construction contracting company providing construction services in the gas, oil, electric and telecommunications industry. In total, the company workforce is more than 1,500, with headquarters in Minnesota and branch offices nation-wide.

It is a labor intensive project requiring a wide range of heavy equipment, technical and labor skills loaded with challenges and unexpected surprises.

Digging and welding dominate this project. Most of the asbestos covered pipe is coming out of the ground and processed on site for disposal at a certified landfill.

Above ground, the digging is taking place in the more densely populated neighborhoods of the city filled with residents and vehicles. Below ground, the main shares space with other utilities and threads through intersecting utilities at street crossings.

Visual inspections of every weld, 1,500 of them and confirmed by X-Ray tests on the gas main and bacteria tests on the water main before either one was declared operational took time and careful documentation.

At times, the project relied on complex traffic control, including the management of traffic at a high volume, three-way intersection this year on a route that serves as a direct connection to the international airport less than 3 mi. (4.8 km) away.

And if that were not enough to manage, gun shots between two rival gangs rang out last year in a work zone, forcing the contractor to bring the police in to stand guard until crews completed pipe work there.

In spite of these challenges, Miller said the project has been going well and credits the contractor and the residents affected by the work in keeping the project on track.

“Q3 did a really good job restoring and getting everything back quickly.

“Part of that,” Miller noted, “is that Q3 is an integrated company. They have locating abilities, they have restoration capabilities and they own their own traffic control. These are huge items they brought to the table.”

Miller praised the residents who “have been exceptionally patient and understanding regarding the work and disruption it has created for them.”

For a project of this scope with all the incalculable variables, it has an exceptional safety record.

“The first thing we want to recognize is safety. We want to be safe,” Marka said with a nod toward Q3 crews and subcontractors. “We've worked a quarter million man hours so far and only had one OSHA recordable injury and one minor injury.

“Considering the areas that we've worked in and the type of construction; putting in a 20-in. pipe line through town in concentrated areas under traffic conditions, I think the crews have done a great job!”

Just some of the general numbers show what crews faced.

Approximately 1,500, 40 ft. (12.2 m) sections of steel pipe will be laid and welded together before the last section of pipe is buried. Crews removed nearly an equal number of feet of old pipe.

A couple dozen pieces of heavy equipment worked the project including Cat, Hitachi, John Deere and Link-Belt track hoes, dozers and rollers. Crews with Ellingson Companies based out of New Concord, Minn., operated an American Auger 440 directional drilling machine on most of the underground crossings.

Typically, crews worked two city blocks at a time characterized by digging the trench, removing the old pipe, installing the new, backfilling and restoring the street.

Work started on the northern end of the project in the spring of 2013 with the reconstruction of a gas regulator station. From here, pipe crews dug south in a series of angular steps before reaching the far end of the pipe run near the Mississippi River on the south side of St. Paul.

As track hoe operators dug the trench, the original asbestos covered pipe came out and became a project on its own. It was a major specification that Miller succinctly described as being “very time consuming.

“Part of this was driven by negotiations with the city of St. Paul. We discussed where we were going to go because space is so critical. It would have been so much easier to just leave it in but then everyone would have to work around it in the future.

“So even though it costs significantly more to do, we signed an agreement early on to remove and replace in the same location.” More importantly, it comes back to the partnership we had with the city,” Miller said.

“Asbestos coating removal follows OSHA standards so it is a wet method. Crews scrape it off in an area big enough to cut the pipe, said Tony Wendland, Xcel senior project manager. After cutting the pipe in 15 to 17 ft. (4.6 m to 5 m) sections “we had to go through this process to remove the coating, put it in a dumpster and truck it off to an asbestos landfill. It is all documented.”

Not all the existing main came out.

“Some of the original pipe stayed in place and in areas where traffic or aesthetic conditions made it impractical to take out,” Miller said.

Along 2,750 ft. (838 m) of a busy city parkway, Miller said, “the existing pipeline was under a whole row of trees. We would have deforested the entire south half of the parkway to take the pipe out so we moved out of the boulevard and into the street.

“It was really about trying to do the right thing for the city and have a system that was good and serve the utility, the city and its residents for a long, long time.”

As the old pipe went out, the new pipe came in. While track hoe operators continued to dig further down the trench line, a pair of track hoes stayed at the lead end of the trench waiting on the welders to complete their welds.

At times, a pair of backhoes lifted and placed into the trench 160 ft. (49 m) or four sections of welded, steel pipe.

Maintaining residential access, working around other utilities and managing general traffic control made it a painstaking process.

Digging a trench that more than doubled in depth coupled with bacteria testing and water service hook-ups by crews with the regional water utility bit deeper into the schedule.

Over a two-week period “our normal sequence of events for construction is that we take out two city blocks, remove pavement, install pipe and replace the pavement.

“What's important to note is that alternate gas feeds needed to be designed as work was completed to ensure gas service to all customers.

“Water had to run temporary hook-ups. It takes an immense amount of time and adds more to the complexity of the project. It was painful as all get out but it was really the right decision,” said Miller.

In 2014, the 800 ft. (244 m) limestone bore took place in a tightly packed, residential cul-de-sac. A contingent of a half a dozen pieces of heavy equipment, including the American Auger drill and a couple dozen workers occupied this little niche in the city for seven weeks.

“We set up camp for a very long siege,” as Marka described it, to run under I 35E that cuts through St. Paul.

“We went out in advance and notified everyone in the neighborhood. We made arrangements with them every day to get their vehicles out,” Marka said. “They were great people to work with. We did our best to make things better for them including a little grocery hauling for one of the elderly residents.”

Starting with a 6-in. (15 cm) pilot bore, crews drilled a hole, hooked a reamer on it, reamed a 30-in. (76 cm) hole, swabbed it so it plunged all the debris out and then pulled the pipe back in.

Though a bore through rock drains more time from the schedule, the pull-back goes much faster than in softer soil.

“The key is the material,” Marka said. “We had some issues with debris falling back in some sandy, loamy, cobble rock area. It also takes longer. There are more restrictions on the pipe because of the sand. It compresses on the pipe making it harder to pull.

“We need to use caution because we don't want to be reboring. It's a pretty expensive proposition.”

Pipe crews started work this year in late March at the south end of the project at a regulator station and are making good progress on the final 9,750 ft. (2,972 m) of pipe.

As mid-summer approaches, two of the four regulator stations have been installed and are operating. The fabrication of the launcher/receiver to assist in pipe inspections is done as well as valve sets and regulators.

The bulk of the mainline work and two of the three final bores also have been completed.