Not too many years ago U.S. Highway 321 in North Carolina was just a twisting two-lane road from the foothills town of Lenoir over the crest of the Blue Ridge Mountains all the way to Boone. 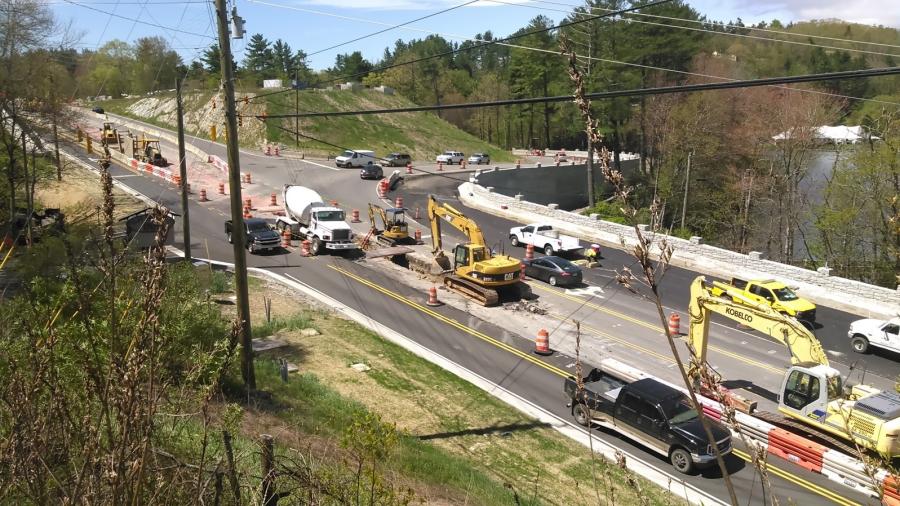 The $66.5 million U.S. 321 Improvement project, as designated by the North Carolina DOT, is set to be fully complete by early Fall 2017.

Not too many years ago U.S. Highway 321 in North Carolina was just a twisting two-lane road from the foothills town of Lenoir over the crest of the Blue Ridge Mountains all the way to Boone, a distance of 27 mi. (42 km).

Tourists from all over the South, including the Tarheel metro areas of Charlotte, Greensboro/Winston-Salem and Raleigh/Durham, often navigated up the sometimes treacherous road to reach the Blue Ridge Parkway.

There, they could make a short and leisurely drive to stunningly-beautiful destinations such as Grandfather Mountain, Linville Falls and Julian Price Park, among others.

But the state realized decades ago that U.S. 321 needed to be upgraded from two to four lanes in order to keep vehicles moving more quickly and safely up the Blue Ridge.

That work has largely been accomplished along U.S. 321 in a series of DOT projects over the last 30 years, with only a single 4-mi. (6.4 km) section still under construction around the heart of the picturesque village of Blowing Rock.

In 2012, the U.S. 321 project's initial main contractor defaulted on the contract after doing some preliminary work. In 2013, Maymead Inc., based in Mountain City, Tenn., came aboard as the job's new skipper.

Due to Maymead's guidance and the professionalism of a number of subcontractors, including Vecellio & Grogan, a West Virginia-based firm, the project's completion appears to finally be in sight.

The $66.5 million U.S. 321 Improvement project, as designated by the North Carolina DOT, is set to be fully complete by early Fall 2017. A 1.4-mi. (2.25 km) stretch of the road was opened to four-lane traffic ahead of the busy July 4th weekend even though work there is ongoing.

The department has divided the project into two parts: Area 1 is the newly opened and more commercial stretch of the road from U.S. 321 Business (South Main Street) north to the Tanger Outlet Center and the nearby Blue Ridge Parkway; Area 2 is considered the more rural part of the road and runs south from South Main Street and down the mountain toward Lenoir before meeting up with the existing four lanes at the Blackberry Road intersection.

Not a Simple Job

Even though the DOT describes the work as simply a widening project, Kipp Turner, the project engineer of Maymead, said that, in point of fact, it is much more than that.

He said the project has involved a great deal of careful, intricate work and craftsmanship since it commenced four years ago, such as blasting solid rock while trying to keep traffic moving on the road. In addition, Turner said there are 40 retaining walls of various sizes being built and several new water and sewer lines, as well as drainage installations.

“What the DOT calls Area 2 is the steep part of the job, which we refer to up here as the 'mountain section',” Turner said. “The biggest part of the work happening on that section is putting up the retaining walls and installing storm drains. There are places there that are on the cusp of getting some fine grading so that we can get some asphalt down this year.”

On this part of U.S. 321, Maymead and its subcontractors are working on the side of a mountain that is prone to unpredictable and often extreme weather, as well as alongside hillsides of near-vertical rock.

Turner said that he has been impressed with how all the crews have handled the conditions.

“We had a company here from Oregon that did the rock bolting and anchoring in January 2014 when it was 4 degrees one morning and the wind was howling,” he said. “But they were up their in baskets drilling into the rock face. I couldn't believe what pros these guys were.”

To say the work can be tricky is to understate it.

“Those cuts for the road widening on the mountain section were into solid rock, so we had to blast it and bring it down on lifts with traffic underneath us,” said Jim Smith, project manager of V&G. “We also did that in town, too, where many of the new walls were put up.”

He explained that on the mountain section, drilling is required in order to put in soil nails to hold and anchor the road while it is being excavated. Then, the retaining walls are able to be securely installed.

This section of the work extends up the mountain, crossing from Caldwell into Watauga counties and across the Eastern Continental Divide at 3,620 ft. (1,103 m) above sea level. As U.S. 321 passes the historic Green Park Inn and a golf course next door, the road becomes more level but moves through a series of narrow S-curves before reaching South Main Street.

“Part of our work is to straighten those curves to a degree that they are much less severe than they are now,” Turner said. “We will also be doing that going down the mountain as much as we can, too, but there will still be curves in the road alignment.”

Turner described the retaining wall installation as a major scope of the U.S. 321 project, in particular on the mountain section.

“All are complete on the town portion and quite a few on the mountain section, too,” he said. “These walls are unique, though, because the town of Blowing Rock had input on what the façades would look like. As a result, we have got some cast-in-place concrete walls that have that natural-rock look, some pre-cast panel walls that have that same pattern, and some gravity walls with a similar appearance, also.

“But the majority of the walls are the mechanically-stabilized earthen walls. V&G has been putting those up. And we are supplying all the aggregate that goes behind those walls, well over 100,000 tons that Maymead brings that in from our own quarry in Mountain City. We mine our own aggregate for use in our asphalts, too.”

The town section, or Area 1, is shorter and a much straighter stretch of road that passes many local businesses. That poses its own challenges, Turner said, because his crews have had to work around often heavy vehicle traffic in order to put in the underground utilities.

As a result, since the work started on U.S. 321, tourists and residents alike have had to deal with traffic barrels, lane detours, and, at times, delays. That prompted Blowing Rock's civic and business leaders to request that the work focus on making it easier to get around town this summer even though work would not be fully done.

“So the big push in 2016, and really since last fall, has been getting this section in town ready to handle more tourist traffic,” Turner said. “As a result, we just opened a four-lane traffic pattern through there in time for the Independence Day holiday to ease some of the congestion.”

Turner and his people will complete the finish work on Area 1 by the late summer or early fall, he said, before turning all their attention to the mountain section for completion next year.

A variety of different equipment has been used on the U.S. 321 project, Turner said. There are a couple of Caterpillar D6s and D8s on the project currently, but not as many as when there was more earthmoving to do. There also is a Cat 303.5 mini-excavator on the job, in addition to a 330C and a 336E with a hammer on it that belong to Vecellio & Grogan. Another sub has some Cat 320 trackhoes and a Kobelco 290 excavator with a hammer, he said.

“We use Cat pavers at Maymead, typically an 8-foot and a 10-foot paver on this job that will expand out to 14- and 16-foot paving widths,” he added. “We usually keep a variety of Cat, Ingersoll-Rand and Volvo rollers on hand.”

Even though Maymead's main office is in Mountain City, Tenn., it has a major presence in northwest North Carolina with offices and aggregate plants in Statesville, Hickory, Lenoir, Morganton, Marion, Boone, Pineola and Jefferson.

Vecellio & Grogan is based in Beckley, W. Va., and is one of the Southeast's leading highway and bridge contractors, according to the company.