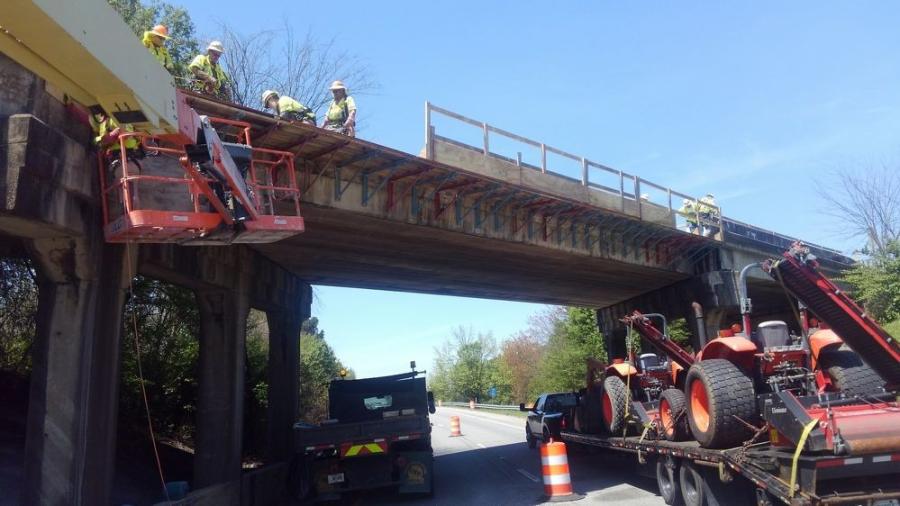 A crew member on the platform of a JLG boom lift and several others above him work on installing the temporary wooden railing. (Tennessee DOT photo)

The collapse of the I-75 South bridge over I-24 West in Chattanooga April 1 proved to be anything but a funny April Fool's Day prank to motorists and the Tennessee DOT.

All lanes at the busy interchange of I-75 and I-24 closed for several hours after the failure, stopping traffic in all directions throughout most of the day.

Due to the swift response of TDOT and its contractor, C.W. Matthews Contracting Co. of Marietta, Ga., however, repairs on the two-lane I-75 South bridge — originally estimated to take two weeks — were completed in just seven days as traffic flowed freely again by early April 8. 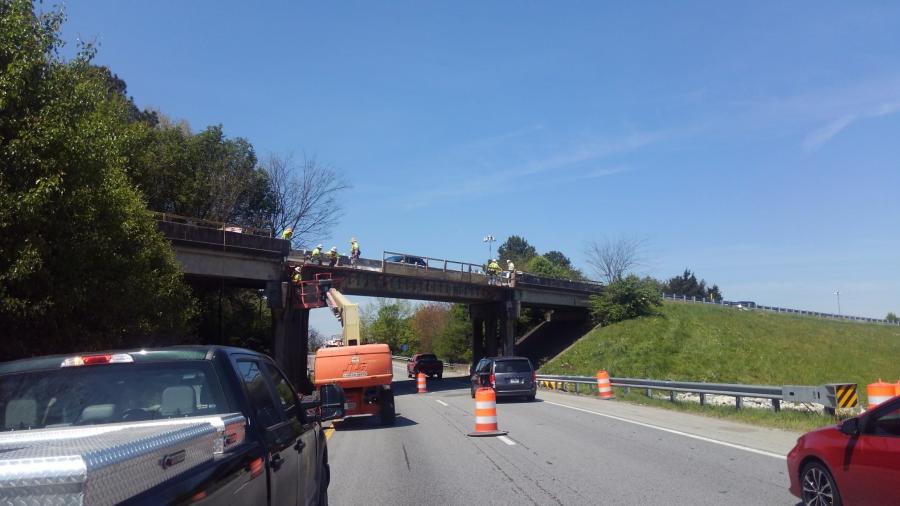 The accident occurred at "one of the most heavily-trafficked intersections in the country," Chattanooga Mayor Andy Berke stated on Twitter. An average of 27,800 trucks and cars come through the intersection each day, according to TDOT.

One person was hurt due to the bridge failure when a single car hit the fallen concrete. The victim's injuries were determined to be non-life threatening, according to TDOT.

By the evening hours after the April 1 collapse, TDOT had reopened the I-24 westbound lanes to traffic and its crews were soon at work fixing the I-75 South bridge overhead.

That was despite the fact the damage to the I-75 span was worse than first thought.

At a news conference April 2, Paul Degges, chief engineer for TDOT in the Chattanooga area, said the local police mistakenly reported to his agency that the concrete bridge rail had fallen. Instead, engineers discovered it was the outer bridge beam, along with the concrete rail, that had collapsed onto the I-24 West roadway below.

Heavy Impact From Below 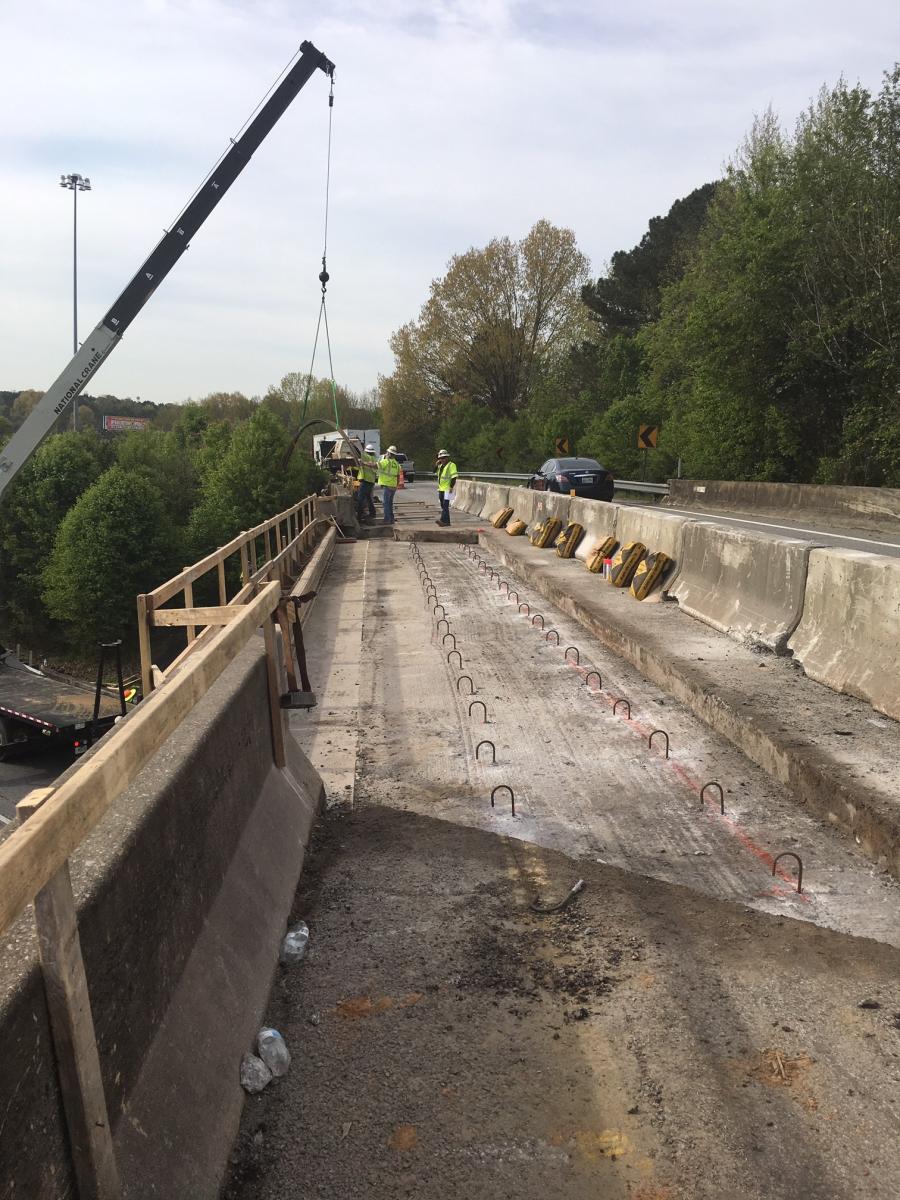 "We did a fair amount of forensic work to see if it was an initial design issue, but we determined that was not the cause," Degges explained. "Instead, we believe some sort of oversized-load vehicle hit that bridge underneath and sliced through some of the steel-reinforced strands in the exterior beams. It didn't collapse immediately. The hit could have been a matter of hours or a few days before, but it was weakened by the strike."

He added that the beam's steel didn't have any rust in it, which also led his engineers to conclude that a heavy truck struck the bridge shortly before it failed. Degges also said that recent temperature changes in the Chattanooga area could have further stressed the broken steel strands, causing them to finally snap.

"We saw a series of five steel strands that were all broken in the same location," he continued. "It seemed improbable to us that you would have a failure of five different reinforcing strands in the same place. The broken strands all happened to be under the left lane of traffic and not in the middle of the bridge's underside. All the forensic evidence shows that the strands broke, the beam fell and pulled one end of the beam off the pier and it fell straight down onto the pavement."

By the evening of April 1, TDOT had cleared away the heavy debris in the roadway and reopened I-24 westbound lanes to traffic. Later that night, the agency allowed the right lane of traffic to flow over the damaged I-75 bridge after putting temporary barriers in place. 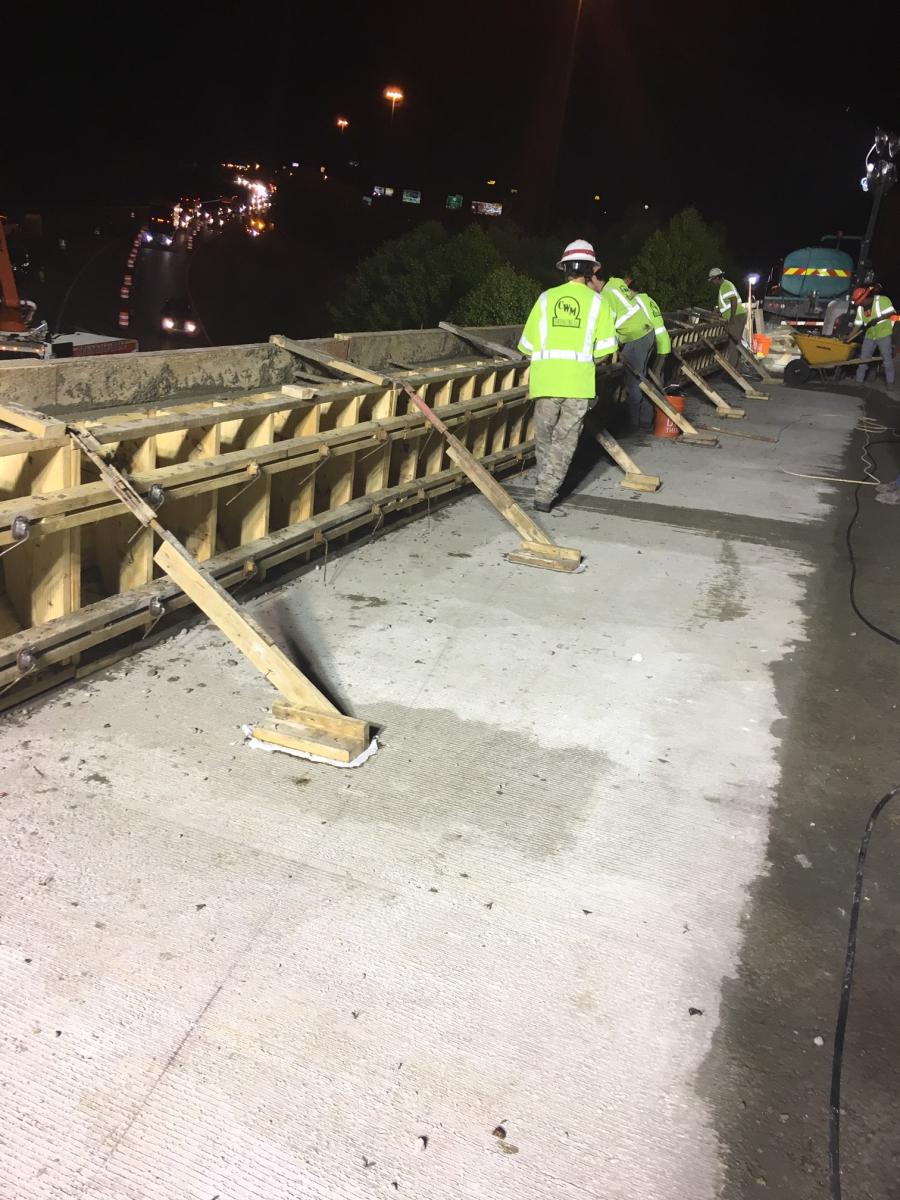 To remove the broken beam from the road that day, Degges and his crews brought in an excavator that had a hoe ram, also known as a pavement breaker, fitted onto it. The powerful percussion hammer is ideal for this type of job.

With that done, TDOT hauled away the piece, and its dump trucks brought in concrete barrier rail to the site for the rebuild.

On Tuesday evening, April 2, C.W. Matthews began their part of the emergency repair to restore the I-75 South bridge back to two lanes.

"We were looking at a longer repair time but, because the contractor worked 20 hours a day through the following weekend, we were able to get it open again to two lanes before the Monday morning rush-hour traffic on April 8 — less than a week after the collapse occurred," Degges said.

During the work on the reconstruction of the outer bridge beam, TDOT and C.W. Matthews erected a new steel railing that allowed the two lanes of traffic to continue to move over the bridge. Degges said the lanes were narrowed a bit, but drivers could still travel safely and easily from I-24 West onto I-75 South.

The repaired bridge will be permanently removed in the next several years as TDOT and C.W. Matthews are currently working on designs for a new reconfiguration of the I-24/I-75 interchange. At 60 years old, the I-75 South bridge is approaching the end of its useful life, Degges said.

TDOT does not know who hit the bridge and caused the collapse. The department's cameras at the site don't keep a recorded history of footage due to privacy laws, Degges said, although the department and police are still investigating.

I-24 begins in the city and runs northwest through Nashville and into southern Indiana, where it links with other major highways to St. Louis and points west. On the southern end, it links with I-75 to move people and cargo south to Atlanta, Tampa and Miami.