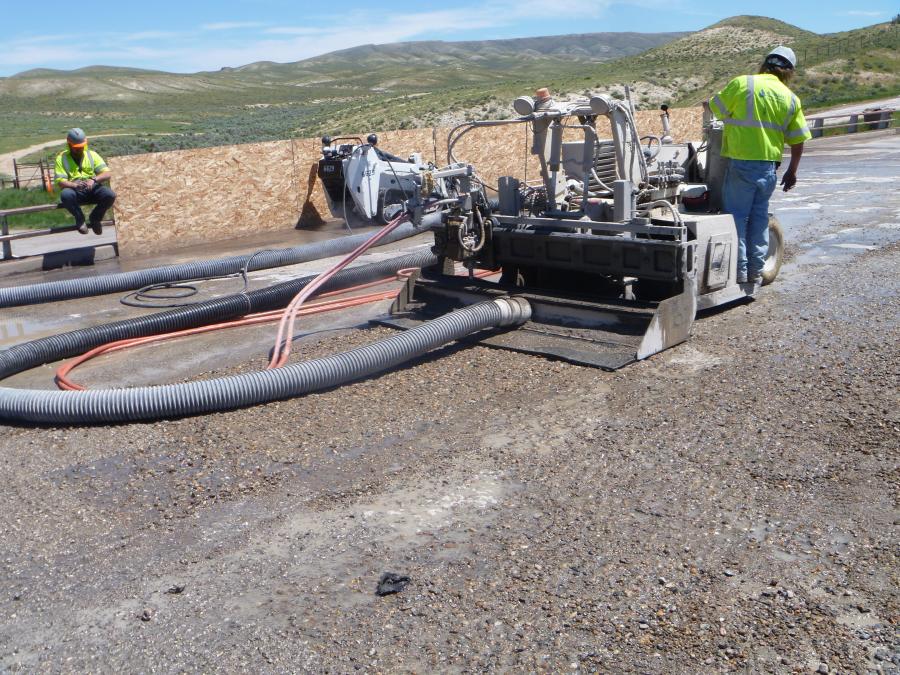 Work is under way on a repaving and bridge rehabilitation project of more than 6 mi. (9.7 km) of I-80 in southern Wyoming.

Work is under way on a repaving and bridge rehabilitation project of more than 6 mi. (9.7 km) of I-80 in southern Wyoming. The project has been in the works for the last six years or so, said Ralph Tarango, district construction engineer with the Wyoming Department of Transportation. WYDOT awarded the $6.3 million work to McGarvin-Moberly Construction in October 2015.

“It's mainly a mill, crack and seat overlay, and bridge rehabilitation in the I-80 westbound lane between mileposts 233 and 240 with four structures: the Union Pacific Railroad overpass; the Peterson Interchange; Machinery Pass and the Saratoga Interchange, also known as Walcott Junction,” Tarango said.

Traffic has been rerouted to the eastbound lanes with one lane in each direction while the work is ongoing.

“While the westbound lane is closed, traffic will be head-to-head in the eastbound lane with a posted speed limit of 65 mph,” said Steven Sapp, WYDOT engineer. “Motorists need to be on the lookout for slow moving traffic and to make sure they obey posted speed limits to ensure safety in the construction zone.”

“We investigated it and we found alkali-carbonite reactivity, which kind of acted like a cancer,” Tarango said. “It just kind of deteriorated at the joints. It acts like cancer when water gets to it. It's basically due to the dolomite properties that were used in the cement. The way the dolomite reacted with concrete and water. We had to put in overlays to patch it together. Now, we are going to mill out the overlays, then crack and seat it. We'll use a weighted hammer, crack up the concrete, seat the concrete with a big roller, then put new mix over top. When we roll it with the big roller, it helps get rid of voids that were created when the concrete was cracked. Then we'll come in with five more inches of hot plant mix.”

Crews also will be using hydro-demolition on the bridge deck to take out all unsound or weaker concrete before doing the overlay.

Work began in May and is expected to be complete in fall of this year. The repaving should last another 10 years before crews will need to go in and do another 2 in. (5 cm) overlay, Tarango said.

“After that, it should last another seven years and then another seven years,” he said. “If you stay on top of it, you can do this indefinitely. But you do have to transition in and out of the bridges. You're not just building on top, but have to mill out to transition to them. You can't raise the grade of the bridge every time you do an overlay.”

Prior to the project onset, crews installed slip ramps and crossovers at each end of the project, which is located in Carbon County.