Crews Work Around the Clock on I-49 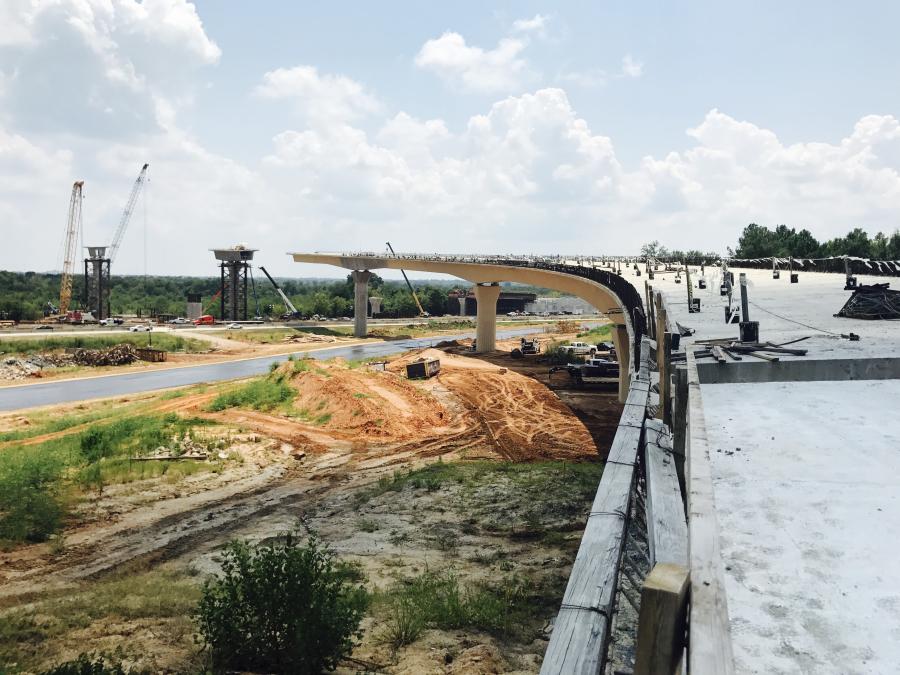 A $176 million project that began in 2014 is inching closer to completion in north Caddo Parish, La. Construction on I-49 North Segment K is being performed in two phases, based on the size and scope of the assignment.

“Work to construct this entirely new section of I-49 north is necessary because I-49 currently is not a complete corridor,” said Erin Buchanan, public information officer, Louisiana Department of Transportation & Development (LA DOTD) District 04. “Much has been accomplished by DOTD on meeting that goal from the Arkansas state line southward, but this connection of I-49 Segment K will provide a vital arterial thoroughfare through Shreveport.

“Because of the complexity and magnitude of this project, it was necessary and logical to divide segment K into separate state projects. Segment K Phase 1 was substantially complete in spring 2017, but is not open to traffic as integral components of the connecting Phase 2 are still under construction. The benefit of splitting the project into two phases is that a local contractor was able to bid on and be awarded the project, resulting in lower costs to LA DOTD. Much of Phase 1 consisted of dirt work and standard bridge work.”

Currently, crews are working six days a week, Monday through Saturday, 24 hours a day. As part of Segment K Phase 2, the portion of I-220 within the project limits is undergoing significant improvements. Both the eastbound and westbound lanes of the interstate are being removed and replaced. The westbound lanes are complete, with eastbound road work currently underway.

“This means there have been lane restrictions on I-220 throughout the duration of this project, but motorists have been patient while this work is ongoing, and we greatly appreciate their understanding of the process,” said Buchanan.

I-49 Segment K Phase 1 is a $36.5 million project and is a new section of interstate connecting LA 3194 (Martin Luther King Drive) and I-220. Segment K Phase 2, a $139 million project, is a little over one mile of I-49 North consisting primarily of overpass interchanges. Over half of these bridges, which are pre-cast concrete segmental structures, have been fully constructed. All the columns and footings for these overpasses are in place. The projects are a combination of state and federal funds.

“As this is a new section of interstate, there are no traffic count numbers. However, approximately 65,000 vehicles every day pass through the section of I-220 that is undergoing extensive improvements within the project area,” said Buchanan.

During the length of the project, drivers are regularly being reminded to exercise caution when traveling through work zone areas and be on the lookout for work crews and their equipment. Area residents have been warned to exercise caution when driving, walking or biking near an active work zone. To alert motorists, LA DOTD provides traffic notifications and project updates through a subscription-based system called MyDOTD.

PCL Construction is serving as the project's general contractor. During construction, crews are using standard safety harnesses, and are operating under a 100 percent hard hat policy in the project area. Weekly safety meetings also are being held to address any issues and to ensure continued adherence to all safety guidelines and protocols.

“One of the greatest challenges for this project is that it spans an active interstate, which is also being reconstructed within the project area,” said Buchanan. “Also, the overpasses in Phase 2 are built as post-tension, pre-cast segmental bridges.

Outdoor conditions also have been a concern during construction.

“The Shreveport-Bossier area experienced significant and historic flooding in both June 2015 and March 2016,” said Buchanan. “These weather events impacted progress during those times. Severe or extended weather events always have the capacity to impede progress on construction projects.”

Work began on Segment K Phase 1 in April 2014, and on Phase 2 four months later. Phase 1 is substantially complete, with the estimated completion for Segment K Phase 2 scheduled for late spring or early summer 2018, depending on weather conditions.

“The entire Phase 2 is over half complete,” said Buchanan. “Currently, concrete paving is under way, bridge approaches are being built, and bridge segments are being cast and erected. Bridge footings and drill shafts are complete, and most of the columns and caps are also finished, along with 50 percent of the overpasses and the paving on I-220.”

As work continues, there are several key tasks still to be carried out, including the bridge superstructure and barrier rails, reconstruction of the eastbound lanes I-220 and completion of the mechanically stabilized earth (MSE) wall, which is adjacent to the interstate and is more than 50 percent complete. The MSE wall is an earth-filled pre-cast panel barrier that helps lessen the wetland footprint and need for additional right-of-way acquisition.

“The site encompassed an active interstate, as well as an active subdivision just to the north of the project area,” said Buchanan. “A swampy, non-wetlands area was also within the limits of the project.”

Conditions were less than ideal, leading up to construction.

“Hundreds of dumped tires were discovered, which had to be properly disposed of prior to work commencing, ” said Buchanan. “Two haul roads had to be built parallel to I-220, in addition to a cul-de-sac in the neighboring subdivision.

“When the lanes of I-220 were initially removed, crews discovered subgrade with high plasticity index (PI) material. This had to be replaced with acceptable borrow. Additionally, some back slopes were exhibiting finger erosions from non-plastic silts and loams. Overall, the Phase 2 project comes with its own difficulties, because it is primarily composed of overpasses, and it is being built through a marshy area next to Twelve Mile Bayou, which often has fluctuating water levels.”

A total of 226,693 cu. yds. of dirt and 471,671 cu. yds. of embankment will be moved on the project, which requires scrapers, hauling dump trucks, track hoes and sheep foot rollers. Some of the primary materials being used include concrete, steel, dirt and rock.

An essential connecting roadway for Segment K, I-49 North Segment J, which is a 4-mi. stretch of new interstate connecting Martin Luther King Drive and LA 1 (North Market Street), was officially opened to traffic on May 31. The $55 million project also included major improvements to a portion of Martin Luther King Drive. The four-lane highway was lowered to accommodate the new interstate overpass and reconstructed with a widened median.

Located in the northwest corner of Louisiana, Caddo Parish covers 852 sq. mi., bordering Texas to the west, Arkansas to the north, the Red River to the east and DeSoto Parish to the south, with a small section at the southeastern corner adjoining Red River Parish. The largest metropolitan area within the Parish is the city of Shreveport, which serves as the Parish seat.