Crews Work to Save Lives on Mike Padgett Highway 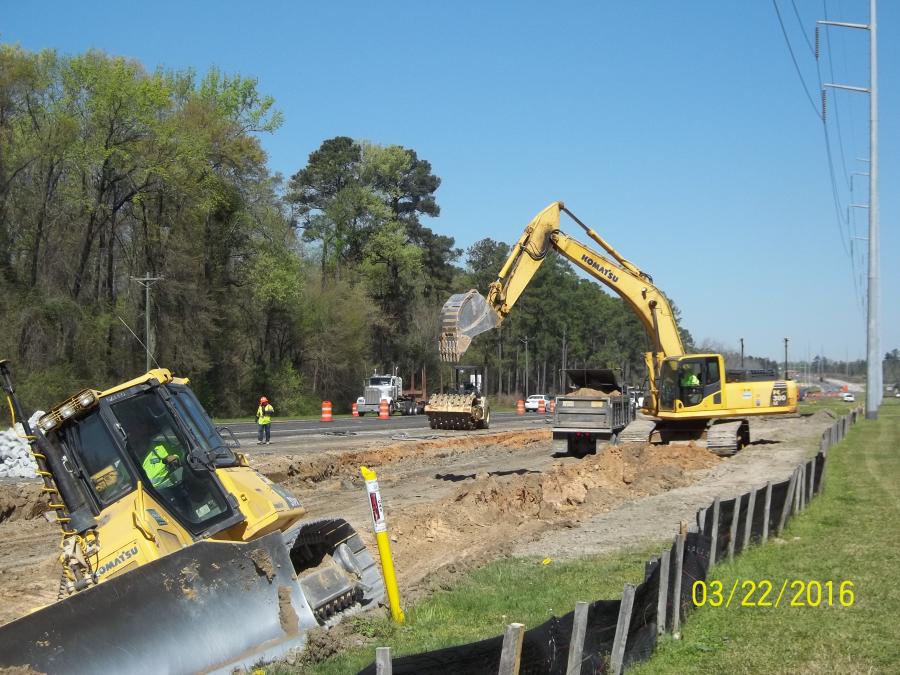 In an effort to help save lives, construction crews in Augusta, Ga., are making improvements to a dangerous stretch of roadway commonly referred to as Mike Padgett Highway. Work on the $29 million state Route (SR) 56 project began in late 2013 and should be completed by the first quarter of 2017.

“Based on project design studies, the four-year accident data for this segment includes 295 total accidents, with 165 total injuries and 10 fatalities,” said Kyle Collins, a communications specialist of the Georgia Department of Transportation (GDOT). “In 2006, the statewide average accident rate on comparable roads was 2.42 times the accident rate on this segment of SR 56. The majority of accidents were rear-end collisions. The second most frequent type of accident was angle collisions.”

The purpose of the project is to improve operational conditions on SR 56 and control left turn movements to and from connecting streets. Collins said speeding and aggressive driving are factors that lead to increased vehicular incidents.

“This south Augusta area route is heavily traveled due to various industries in the corridor. SR 56 also serves as a connection to nearby Burke County, and carries a large load of Plant Vogtle traffic, Collins said.

“Higher traffic volumes also lead to increased chances of incidents. This construction project will create additional lanes at side road intersections, which will allow vehicles to decelerate and exit out of the through travel lanes when making turns. This will enhance rear-end crash avoidance at these locations.”

The work involves almost 5 mi. (8 km) of widening and reconstruction. It includes construction of two bridges and approaches. The widening will include four 12-ft. (3.7 m) travel lanes (two in each direction), a 22-ft. (6.7 m) raised concrete center median and 10-ft. (3 m) shoulders, with 6.5 ft. (2 m) being paved and the balanced being grassed.

The work is following the scheduled flow of all GDOT projects. The concept was developed and approved in April 2008. The project then went into the design phase, which was completed and let to construction in June 2013.

According to Dallas Suggs, Augusta area manager, Reeves Construction Company the project is currently in the later phases of Stage II construction.

“Most of the heavy grading and utility work is complete. As of right now, bridge work over Little Spirit Creek and Spirit Creek on the right side is approaching completion. Concrete raised medians are currently being installed in preparation of the final surface placement. Minor grading activities remain, once bridge construction has been completed.”

Suggs said existing concrete roadbed removal has delayed the project, as have environmental restrictions and the elements.

“Weather plays a major role in construction projects where grading is critical to completion. Even though 2016 was a dry year, previous years experienced above average rainfall. Weather will be the major contributing factor heading into the winter months,” Suggs said.

Another challenge involves a specification requiring the contractor to coordinate all utility relocation on behalf of the owner.

“This requires the contractor to schedule and coordinate concurrent utility and construction activities, to maximize contract time,” said Suggs. “This project is also located on a historically dangerous section of Hwy 56. Safety of the traveling public and employees is taken into consideration in every decision of the project.

“With the recent expansion project at Plant Vogtle, traffic and MVA has increased substantially. Removal of the old concrete roadway also proved to be challenging, especially adjacent to active travel lanes and unknown obstructions. The project is also located in an area where large industries are present and involved in the planning/ construction process.”

Suggs said that the weather is the main factor. “It's holding up the asphalt paving, due to rain and wet cold winters.

Suggs said the state of the existing road was expected for a typical state route that had been previously widened to the limits of homes and utilities.

“The existing road consisted of sections containing four lanes, with and without a center turn lane. The purpose of the project was to construct a physical barrier to help control the flow of traffic with the addition of median and outside turn lanes that enable the two constant lanes of travel moving north and south.”

Working in an environment with traffic nearby, crews are ever mindful of motorists, especially considering the roadway's reputation.

“It's very challenging, and extremely critical that everyone is always aware of this condition. Even though channel and barrier devices are used to control the traffic, employees have to always be aware of their surroundings, and never become comfortable with temporary barriers separating the work area from the travel lanes. In the age of the smart phone, and texting while driving, employees always have their guard up for the unexpected,” Suggs said.

GDOT allowed the contractor to recycle all the existing roadway concrete into recycled graded aggregate base to be used on the project. Crews also incorporated 30 percent recycled asphalt in all the asphalt placed on the project.

The widening project was designed based on multiple studies. A design to provide minimal impacts to environmental resources and surrounding properties was the major concern.

There are four total traffic signals on the project at Doug Barnard Parkway, Goshen Industrial Boulevard, Old Waynesboro Road and Tobacco Road. They are in place and active, but there are some small items to make them permanently complete.

The 2006 average daily traffic of 12,200 vehicles per day on SR 56 within the project area was projected to increase to 35,240 by 2032. The project was proposed to involve 126 parcels requiring right-of-way acquisition.

A total of seven wetland sites and three stream sites were identified within the APE of the project. The U.S. Fish and Wildlife Service and the Georgia Department of Natural Resources listed 16 species of plants and animals as protected or endangered within Richmond County, Georgia. Bridge construction was halted in March 2016 to prevent impact to the endangered fish in the area. The work resumed in late August 2016.

Localized temporary water quality impacts were anticipated to be minimized during construction by the use of best management practices. In November 2016, preparations had to be made for a traffic split as workers asphalt paved sections of the roadway mainline to properly level the area. The switch separated vehicles in a single lane to either side of the new construction starting at Old Waynesboro Road.

GDOT officials expect the new four-lane highway to fully open to traffic by March 2017. The estimated completion date has been adjusted to next March, due to remaining bridge construction at Little Spirit Creek and other factors.

Mike Padgett Highway was dedicated in 1995, and is named for the longtime legislator representing Richmond County in the state house, state senate and Richmond County Commission. It follows Georgia Highway 56 from its intersection at Peach Orchard Road to the Burke County line.—CEG