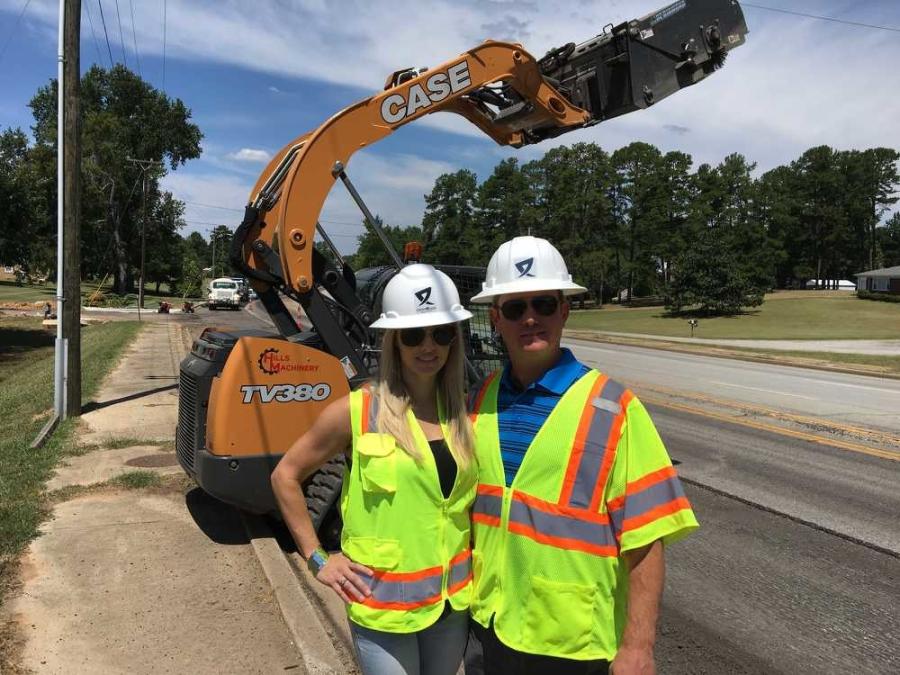 While many people in the general construction industry may have never heard of a dedicated milling debris clean up company, Crossroads Construction Services Inc. has established itself as a leader in this niche market in just the first year in business. Milling and paving contractors in the Southeast now have an opportunity to outsource the cleanup portion of their highway resurfacing operations, thus freeing up their time to find employees, so that they can pursue additional work.

Crossroads Construction Services Inc. is a family business that is owned and operated by Dallas and Katherine Reeves. Their company currently serves the South Carolina, North Carolina and Georgia markets out of their two facilities located in Greenville and Bluffton, S.C. This couple has combined their years of experience to provide a quality solution to an often-overlooked process in the highway resurfacing industry.

Katherine manages all the office operations, and Dallas all field operations. Dallas and Katherine met at the University of South Carolina. Katherine earned her BS in Management, and Dallas his BS in Marketing as well as an MBA. Katherine worked in sales and owned another small business prior to starting a family. Upon graduation, Dallas worked in construction equipment sales for the first seven years of his career holding sales roles with material handling and asphalt paving-focused Caterpillar dealers, the road construction focused manufacturer Roadtec and three years working with Jim Hills at the independent multiple line dealer JW Burress.

Dallas went on to explain that while he enjoyed equipment sales he was ready for more challenging roles. By that time, he had earned an MBA and felt he could contribute in a much greater capacity to a larger organization. He was approached by Ingersoll Rand and interviewed for a marketing manager position with the company.

“That's when I took my first step over from distribution into the OEM side of the business,” he said. “I managed the commercial paver line, as well as the slurry seal distributors. I was with Ingersoll Rand for about a year when Volvo Construction Equipment acquired them. We had moved from Columbia, S.C., to Shippensburg, Pa., with Ingersoll Rand, but as a result of the Volvo acquisition a vice president position opened up in Asheville, N.C. This was an opportunity to significantly advance professionally, and also move back closer to home. My parents live in Greenville, S.C., and Katherine's parents live in Columbia, S.C.”

Dallas served as the vice president of the road machinery business line of Volvo Construction Equipment and managed the sales of all motorgraders, paving, compaction and milling equipment for North America until the company restructured relocating the family back to Pennsylvania. Dallas worked for Volvo CE for eight years, with his final role being that of Global Marketing director for their full portfolio of road building equipment. However, in 2014 opportunity to take on the vice president of sales role for JCB North America gave the Reeves family the opportunity to move to coastal South Carolina, and once again closer to friends and family.

Dallas said he enjoyed and leaned much from his corporate management experiences, but said the long hours and stressful work conditions kept him away from his family and his home in the south, so he and his wife decided to go into business for themselves. Dallas said they looked at buying dozens of existing businesses before they found out about the potential to buy an established cleanup business through a family friend, Jack Hagood, the owner of Pavement Products and Services PP&S a milling contractor in Piedmont, S.C.

“Jack's company used to perform work for my Dad, RD “Butch” Reeves, when my Dad ran Sloan Construction, which is another division of Reeves,” he said. “It's just kind of a tightly knit industry. So, when Jack mentioned that the gentleman that owned the cleanup company performing his work was looking to potentially get out of the business, we met with him and thought that there were advantages to buying an existing business versus starting it on our own.”

“I've always been around the construction industry, so there is a little bit of a comfort factor there,” said Dallas. “I grew up in a family-owned business that my grandfather started in 1955 in Americus, Ga., called Reeves Construction. It's still around with divisions in Georgia and South Carolina. Many of the projects we are doing right now are for divisions of Reeves, Sloan and R. B. Baker, all of which are now part of Colas managed under the Reeves umbrella. So, after growing up around it and working around it — turning wrenches and working on crews as a kid — there was nothing about going into it that made me uncomfortable.”

For now, the Reeves said they are committed to building the cleanup business, which is the process that takes place after a road is milled and before a road is resurfaced.

“A milling machine goes through and shoots 95 plus percent of the material that it chews up from the old roadway in the back of a dump truck,” he said. “But before the paving train can come through, everything the milling machine left behind has to be cleaned up. We use a combination of hydraulic brooms and skid steers with attachments to windrow the material and then sweep it up. We will also utilize blowers, vacuum trucks, milling heads and other specialized equipment when required. Whatever it takes to keep the prime and milling contractors happy with the work we perform”

It was during his three years with JW Burress that Dallas worked with Jim Hills. Hills is now the president of Hills Machinery, which is the Case equipment dealer for the North and South Carolina. This history together is one of the reasons the Reeves looked at Case for their equipment needs when they got into the business.

“We focused on Case because of my relationship with Jim Hills,” said Reeves. “I've known him for years, and I know he would do things for us that other dealerships would not do like loaners, guarantees, and backup machines. He has helped us in a lot of other ways, too. They helped guide us through the financing opportunities that we have with CNH Capital. As a result, we focused on the Case SR280 skid steer loader because it had the height that we needed to be able to dump up in some of the higher sided dump trucks. We bought four of those initially and then we recently just bought the biggest track CTL that they make. My guys really like that, too.”

“There's no DPF and increased fuel efficiency,” said Dallas. “The only Tier IV final solution is the CEGR, coolant exhaust gas recirculation, which is an after-treatment technology. There's nothing else on it, so I don't have to worry about the DPF and I don't have to worry about expensive filters. A lot of it comes down to the relationship with the dealer, but that machine nailed everything we needed it to do. Even though we keep backup units on major projects, we haven't experienced any downtime with our Case SSL and CTL units this year. However, I have the comfort of a three year full machine warranty from Case, and the excellent service from Hills Machinery if something were to happen. Hopefully our uptime streak will continue for the next couple of years.”

Currently, the company also is utilizing five Blue Diamond sweeper pick-up brooms that it purchased from Hills Machinery this year in addition to other backup units. The brooms are mounted on Case skid steers.

“The Blue Diamond buckets we purchased from Hills have worked out great after some minor engineering changes to increase their robustness in our tough application,” Dallas said. We worked with Hills Machinery technicians and Blue Diamond engineers to rectify the issue and ensure maximum uptime. Downtime is simply not acceptable to anyone working in the highway resurfacing industry. It is too costly for all involved.”

Crossroads Construction Services Inc. is using these and other machines on its current projects all over the Carolinas and Georgia, including a 13-mi., three-lane cleanup project on I-95, which totals 807,000 sq. yds. The company's largest project of the year was I-77 in Columbia that totaled 1.1 million sq. yds.

In its first year, Crossroads Construction Services Inc. also has performed work for the largest milling and general paving contractors in Georgia and the Carolinas. They hope to significantly expand their customer base in coming years.

While Dallas oversees the work in the field, Katherine handles everything behind the scenes.

“Right now, I'm doing more of the human resources side of the business which means I oversee in-house operations while Dallas manages day-to-day responsibilities. I handle onboarding of our new crew members including coordinating orientation, training and compliance. Also, I handle billing and our certified payrolls.”

“Her compassion and ability to take care of people means she goes one step further to help people and to do the right thing,” said Dallas also adding, “She is the primary driver for our ability to attract and retain quality employees. It has been a primary success factor for us this year”

They went on to explain an example of going above and beyond to take care of our customers.

“We were doing work in southern central South Carolina,” Dallas said. “We had one guy on the job operating a skid steer with a pickup bucket attachment for this customer. That customers primary broom went down, so that job was going to be shut down for the night. I had my backup broom close by, and a guy with just enough time to get it from one site to the other. We got there quickly and got the job back up and running. We were glad to help keep the job up and running because of the extensive costs of downtime for all involved, and we have continued to help maximize both ours and our customers uptime whenever possible. We had a broom go down at the end of shift one night along with a personnel issue, so I hauled a replacement in for the next shift and ran it myself. That kind of customer service, I think, helps people pick us as their preferred business partner for cleanup operations. When contractors choose who they work with, they want to work with someone who they know will take care of them.”

Moving forward Dallas and Katherine expect to see more growth in the future and expand their offerings inside of the company's footprint in the Southeast.

“We've gone from acquiring an operation that typically ran two to three clean up crews to kicking off our sixth in our first year. Inside of 15, months we have tripled our core business, and we see more potential for expansion if we can keep attracting quality employees and focus on customer satisfaction. We may look at diversification into other areas of business in the future, but for now I'm really excited that we are able to continue to expand what we are focused on — becoming established as the premier cleanup business in the Southeast.”