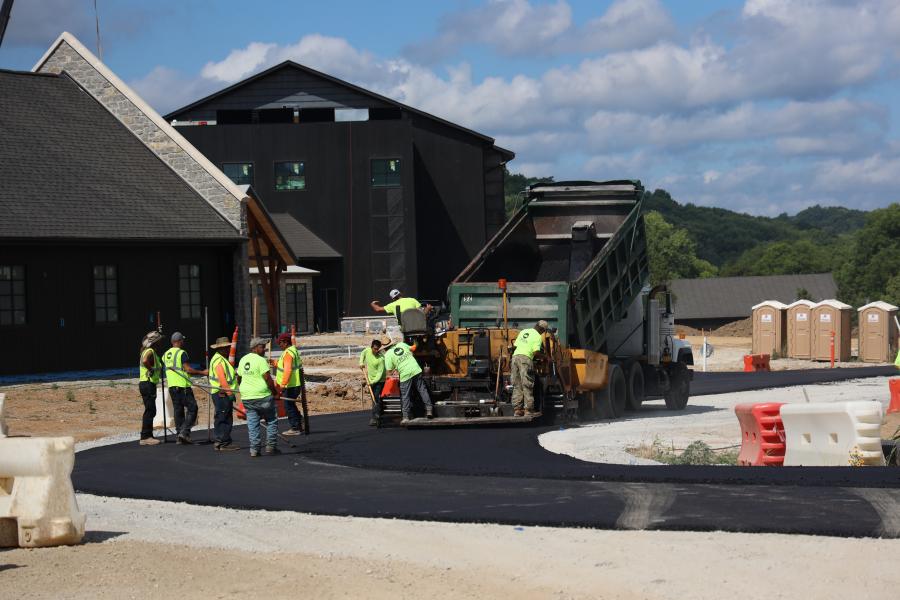 Almost all the equipment owned and used by Crown Paving is manufactured by Caterpillar, and the contractor’s local dealer is Thompson Machinery, a certified Cat dealer in Nashville. (CEG photo)

In the bucolic rolling hills of Middle Tennessee lies a 325-acre development that uniquely combines a luxury resort and spa with a working farm.

Southall is located on the southside of Franklin, easily accessible from Nashville to the north but far enough from the big city bustle to give its guests plenty of peace and quiet during their stay. Although not yet open, the resort will offer 62 guestrooms and suites, 16 separate cottages, the spa, a signature restaurant and culinary program, and a wealth of farm, wellness and adventure activities.

After its construction is completed, officials at Southall are targeting the resort to open later this fall.

Crown Paving to Do Final Work at Southall

One contractor that is helping to put the finishing touches on Southall is Crown Paving, based in Greenbrier, Tenn., and recognized as one of the region's most respected contracting firms.

In business since March 2015, Crown Paving's majority owner and chief manager from day one has been Jessica Blackburn. It has since grown to employ more than 40 people today, she said.

For the Southall project, Crown Paving came on site in August 2021 as a subcontractor to Franklin's Old Hillsboro Building Company, the prime contractor, to perform all the paving work at the resort.

"The roadways we are paving lead to the cottages, inn, an event center, a lake and some orchards, among other features spread over the entire acreage at Southall," Blackburn said.

In addition, Crown Paving's excellent reputation helped her snare the large project, although the presence of COVID-19 ended up delaying her company's work at the development.

"[Southall] is a large project for us," she said. "We had not worked for Old Hillsboro before, but they reached out to us based on a referral and it's been a really successful partnership."

Blackburn described a typical paving crew at Southall as numbering 10 people, along with another four-person base-stone crew and five more folks handling the concrete work. In all, she noted that three different crews were needed to get the job done.

"I attribute all Crown Paving's success at Southall to a top-notch project manager and very skilled crews," she said. 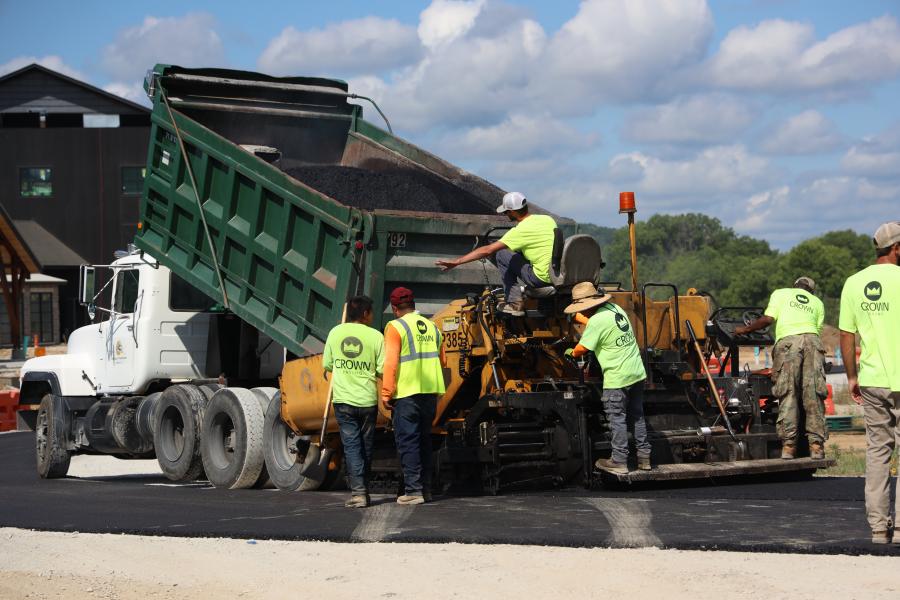 In the areas to be paved at Southall, Blackburn said that her people are installing base stone, BM binder, 411-E surface mix, extruded curbing, shoulder stone and doing the final striping.

To elaborate on how those processes are applied, she explained by saying, "We construct the roadways and parking lots starting with the base stone, then add a binder course in the middle to create structural stability and top it out with surface course. The curb is added to the parking lots for the landscape islands, and the striping is called out for all the parking stalls.

"So, Crown Paving can really shine because we are performing almost all of our new construction services," she said. "Our contract amount for the Southall project is in the range of $1.5 million to $1.8 million."

Southall's entire site is being developed at one time, according to Blackburn.

"Between all Crown's work scopes, it will take about eight mobilizations to finish. We have been able to complete all the paving and concrete curbs without interruption for any of the other trades to access their jobs. This was a big priority for the general contractor and owners to ensure there was always access and trade work being performed. We are well versed, though, at keeping businesses open and accessible during paving."

At the conclusion of Crown Paving's time at the huge Franklin development, Blackburn added, Southall will be substantially complete.

"The surface course of asphalt is one of the last trades to be finished," she said. "The customer wants to have a nice and clean blacktop parking lot and roadway to welcome their guests and patrons."

Almost all the equipment owned and used by Crown Paving is manufactured by Caterpillar, and the contractor's local dealer is Thompson Machinery, a certified Cat dealer in Nashville.

"We have a great working relationship with Thompson," said Blackburn. "The only time we rent equipment is if we have a piece that goes down and don't have a back-up from our own fleet available."

On the Southall project, Crown's paving crew runs a 2019 Weiler P385B paver and a Cat CB1.7 tandem vibratory roller. In addition, her stone crew is using a motor grader and a smooth drum roller. The company's extruded curb machine is made by Power Curbers, and Crown keeps a water truck on site, as well.

Although the entire state of Tennessee has been a hotbed of new commercial and residential development in recent years, Blackburn said that Crown Paving has done most of its work in Middle Tennessee, particularly in the Nashville metro areas —maybe the hottest spot of all in the Volunteer State.

Among the more notable projects in Crown's portfolio, she said, is the multi-year contract it has with the Metro Nashville Airport Authority (MNAA) for on-call paving and line marketing services. The MNAA manages Nashville International and two smaller airports in the metro area. 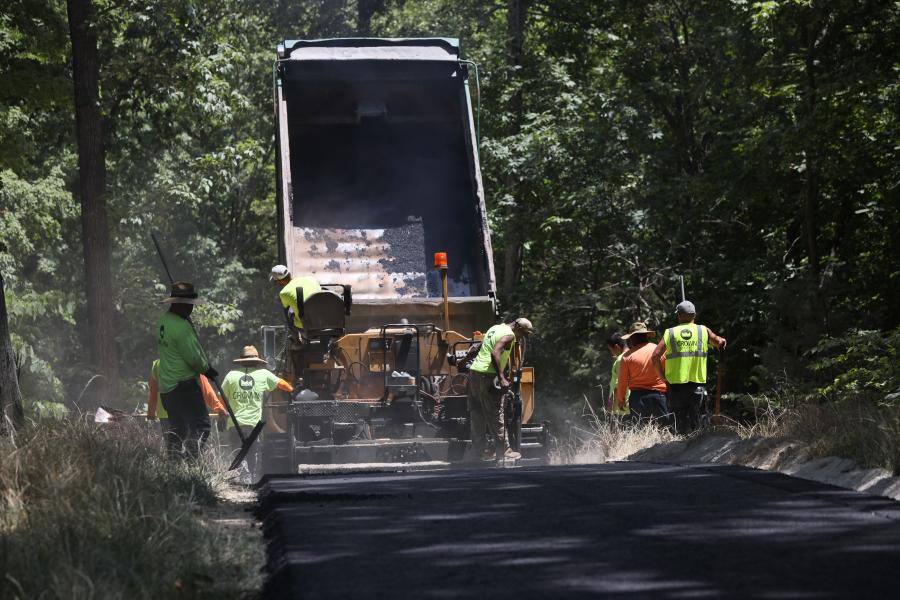 "We pave a lot of subdivisions and have done a few projects recently for the Tennessee Valley Authority [TVA] resurfacing a road going almost two miles to Pickwick Dam on the Tennessee River," Blackburn said. "We frequently perform mill and paving services for several large national retailers too."

Still, she made the point that her company has been known to travel the length and breadth of the state — to Memphis in the west and Chattanooga and Knoxville in the east — to perform its services for many of its top clients.

"We don't do residential projects like driveways, and we don't do any interstate paving, but Crown Paving performs everything in between. The Southall rural retreat is a larger job, but it is a perfect fit because they need skilled professionals for such a high-profile property, and we can exceed their expectations and provide genuine customer service."

Southall to Be ‘Immersive Experience'

Besides Southall's guest accommodations, the resort and spa will feature an apple orchard with 1,300 trees as well as a farm made up of large-format crops, hydroponic and conservatory greenhouses, and a 4,000-sq.-ft. event space.

"Southall started as a dream to create a place for people to stay and experience all a farm has to offer, and it's become more than I could have imagined," Southall founder Paul Mishkin said in a news release, adding that the resort will be "a truly immersive experience."

After it opens, Southall's amenities will only be for guests of the inn, but Mishkin has plans to open it for the general public to experience in the future.

Recently, Southall was named one of Travel + Leisure's magazine's 2022 Global Vision Award recipients as one of "Six Hotel Brands Changing Travel for the Better."