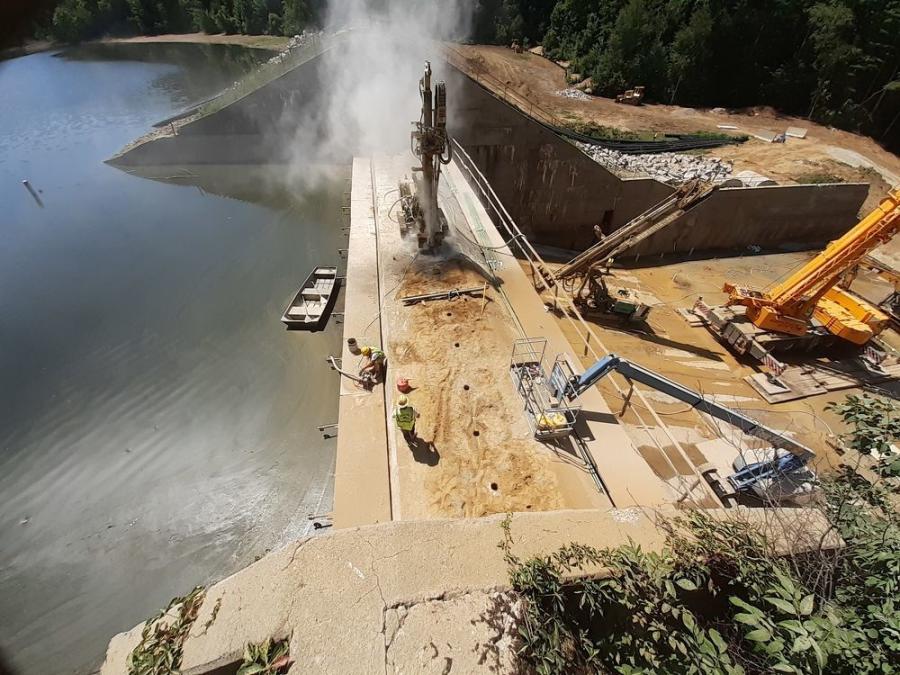 Last June, just as the summer outdoor sporting season was getting under way, trailered watercraft was banned on Ohio's Knox Lake. Knox Lake was created in 1954 when the Ohio Department of Natural Resources Division of Wildlife dammed the Kokosing River to create the reservoir for recreational purposes, comprises 469 acres with 11.4 mi. of shoreline.

The composition of the bottom in the lower section near the dam, at 24 ft., consists of rock and gravel; the upper section, which is only 12 ft. or less, is mostly mud and silt, with standing timber left to provide natural cover for fish. The reservoir is a popular spot for largemouth bass fishing, kayaking, canoeing and motorized boating.

But those motorized boats aren't allowed on the lake for now. The boat ramps were rendered unusable for trailered watercraft after ODNR reduced the water level by 6 ft. in order to begin construction to rehabilitate the 60-year-old dam. Access is still granted for small watercraft, such as canoes and kayaks, and despite a receding shoreline in response to the lower water level, shoreline fishing is still permitted in public access areas. However, Dam Road, which leads to the spillway, is not accessible during construction.

In conjunction with the Ohio Division of Wildlife, ODNR launched the one-year project to improve the Knox Lake Wildlife Area Dam in Knox County, with the goal of bringing it into compliance with current ODNR Dam safety regulations, explained Eric Shafer, Natural Resources engineer — Division of Engineering, ODNR.

According to the Galion Inquirer, rehab of the Knox Lake dam includes stabilization and resurfacing of the spillway; replacing the riprap on the upstream side of the dam; improving the lake drain control structure; and adding an embankment toe drain — a drain located along the toe, or slope, to drain runoff, convey seepage away from the dam and reduce pore pressures in the downstream face of the dam embankment.

The ODNR Statewide Dam Safety program hired Michael Baker International Inc. to provide engineering services for 10 dams across the state in order to bring them into compliance with safety regulations, including one at-risk dam near hundreds of homes. The intention is to mitigate the most serious deterioration hazards, protect downstream residents and provide Ohio citizens with the benefits of dams, such as: water supply, flood control, irrigation and recreation. 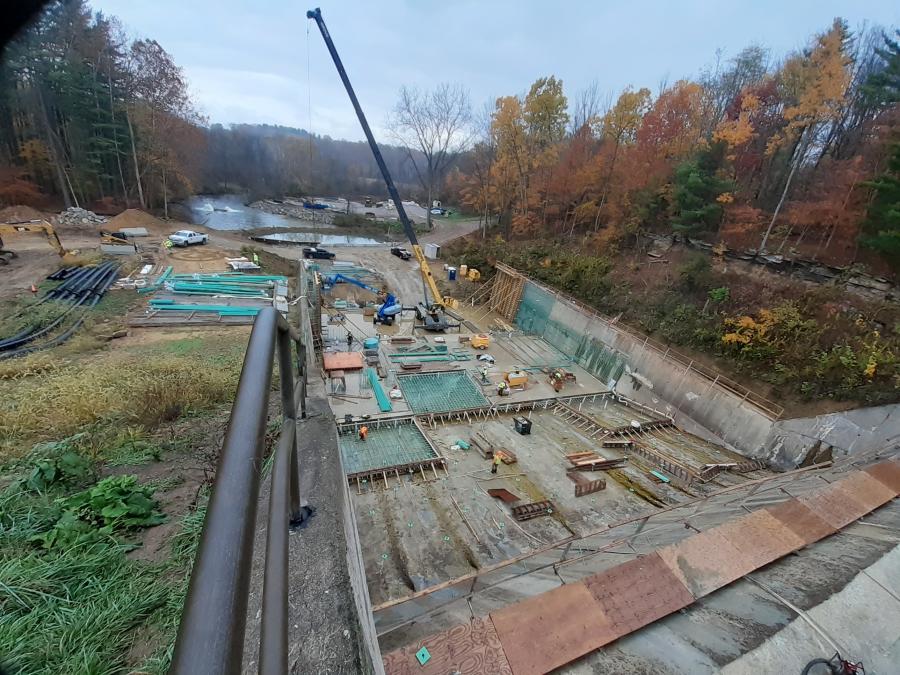 "The improvements to the dam generally include select demolition; passive anchor dowels to stabilize the spillway; concrete overlays to the spillway and training walls; upgrades to the existing lake drain tower and outlet works; riprap protection for the upstream slope of the dam embankment; embankment toe drain; embankment grading; and re-vegetation," Shafer said.

Spillway resurfacing and stabilization will take the longest, the Mt. Vernon News reported, because it requires anchoring concrete into bedrock. Marty Lundquist, an Ohio Department of Wildlife fish management supervisor, told the paper that multiple holes will be drilled deep enough for steel pins to be placed in them before being covered with a new layer of concrete. "When it's done," he said, "it will look brand new."

The Beaver Excavating Company of Canton, Ohio, is acting as general contractor on the project. One of the largest mass earth-moving, site development and civil construction companies in the area, they typically work in the commercial, industrial and heavy highway industries.

One of the most difficult aspects of this project they face, Shafer said, is controlling water during the spillway improvements. 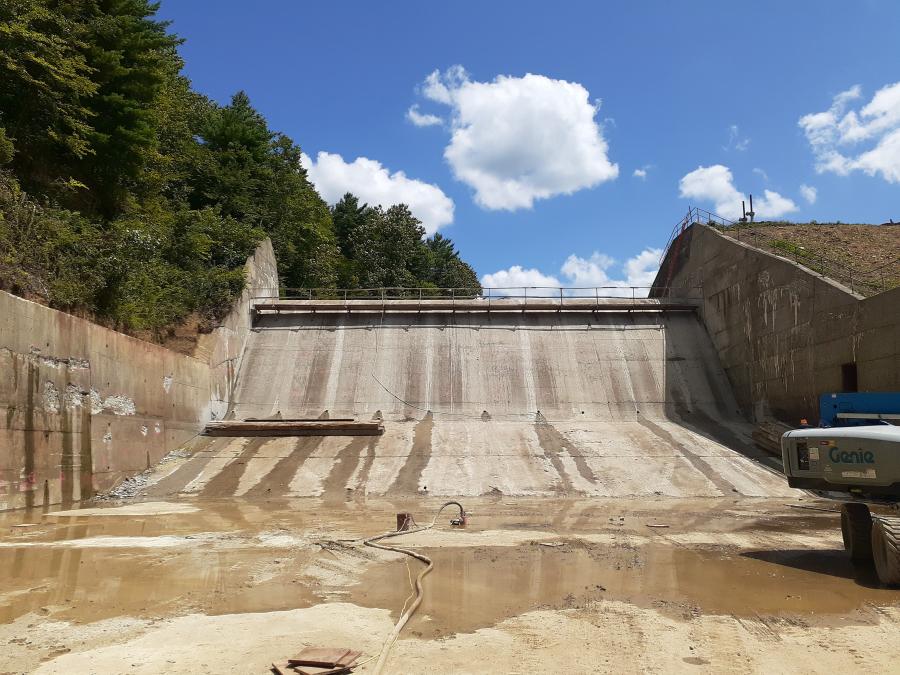 "Under normal circumstances, the spillway passes storm water from the reservoir to the receiving stream," he explained. "However, this is not possible while the spillway is under construction."

To combat this problem, Beaver Excavating implemented a strategy to lower the reservoir level and pass storm water through pipes, keeping the spillway dry during construction. To start the process, Shafer said, the GC lowered the reservoir level approximately 6 ft., using the existing lake drain.

"In order to maintain the reservoir level during storm events, the GC installed a siphon system to discharge water over the dam embankment," said Shafer.

The siphon systems consist of five 18-in.-diameter SDR17 HDPE discharge pipes with a maximum average flow capacity of 100 cu. ft. per second. The lower pool will be maintained until construction is completed.

Subcontractor J&B Steel Erectors, a woman-owned company in Butler County, Ohio, that has worked on bridges, heavy highway projects, a wind farm and more, is supplying and fabricating more than 240,000 lbs. of epoxy-coated rebar to reinforce the training walls and basin slabs. 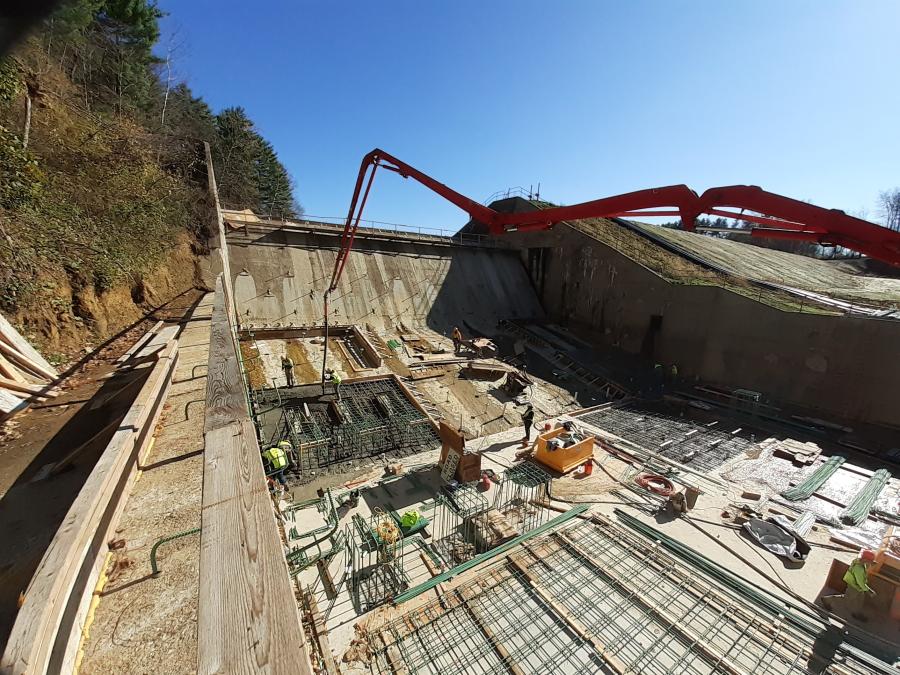 Beaver Excavating used a 500-ton crane to lift the ogee slabs off the spillway crest for processing.

"This crane was also utilized to place a Casagrande C-5 XP crawler rig in position on top of the ogee spillway crest to allow for drilling of the grouted anchors," Shafer said.

An ogee spillway is an overflow type of spillway that contains a controlled weir and is ogee-shaped, or S-shaped, on the downstream face and is considered an improved form of a straight drop spillway.

Other equipment needed for the project includes:

The short, one-year rehab project is scheduled to be completed in June 2021, in time for the summer boating season on Knox Lake.

The $4.6 million structural project was funded from a portion of the state gasoline tax received by ODW, according to the Mt. Vernon News. This tax provides money for projects including recreational dams if they allow gasoline-powered vehicles or boats.

Although not in imminent need of repair, ODW designated the Knox Lake dam a high priority project merely because it has lasted six decades without any substantial work and primarily because it fell out of compliance with modern safety standards.

When work is finished, Lundquist expects it to last another 60 years. CEG