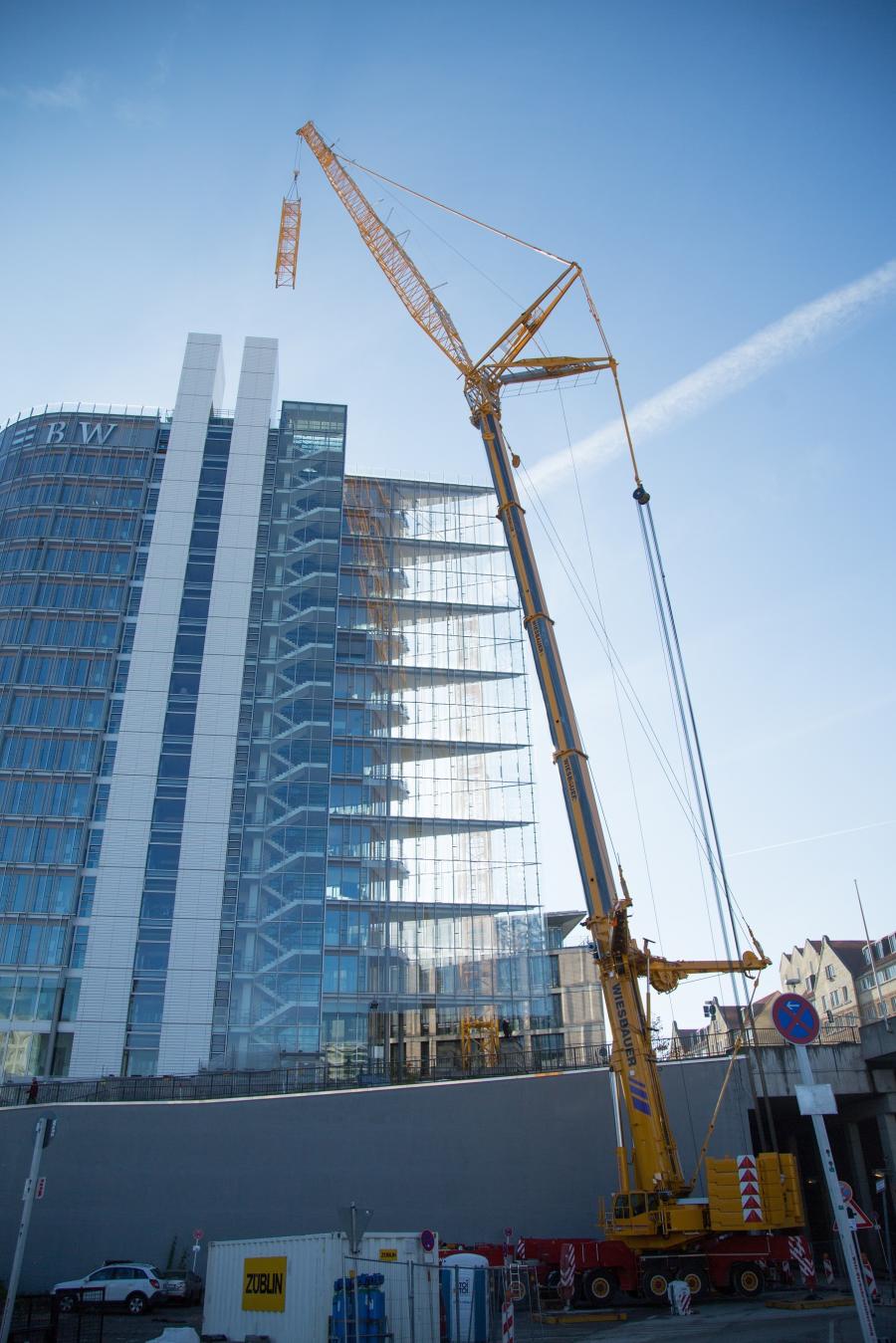 You would be hard-pressed to find a place in Germany that is as busy and congested as the area around the main train station in Stuttgart. And that is exactly where Bietigheim-Bissingen-based crane service provider Wiesbauer had to erect a 295 ft. (90-m)-tall top-slewing tower crane for construction company STRABAG-Züblin and STRABAG-BMTI. For the challenging project, Wiesbauer decided on its Demag AC 500-8 all terrain crane for a number of reasons, including its compact design and the associated maneuverability.

While getting the eight-axle unit through downtown Stuttgart was a relatively relaxed affair, accessing the work site behind the Landesbank Baden-Württemberg (LBBW) buildings proved to be significantly trickier.

“The area behind the bank could not be accessed by our heavy goods vehicles directly, as the official access road passes through a bridge with a 30-tonne limit and consequently is not designed to carry the weight of our vehicles,” Wiesbauer Project Manager Marco Wilhelm said.

This meant that an alternative route had to be found for the crane and lowbed trailers. The private tunnel used by Landesbank Baden-Württemberg and Deutsche Bahn, which also led to the setup location for the tower crane behind the LBBW high-rise, was the obvious solution. Therefore, one of the busiest intersections in all of Stuttgart had to be closed briefly at five o'clock in the morning so that the crane, assist crane and the lowbed trailers would be able to pass through the tunnel against the direction of traffic.

Before the actual lifts to erect the tower crane, a smaller assist crane was first used to lift the corresponding components off the lowbed trailers and set them down on the ground so that they could be pre-assembled. After this, the Demag AC 500-8 took over the erection work as the main crane, and this meant that it had a number of unique challenges ahead of it: Since the tower crane had to be placed between two office buildings right next to the large glass façade of the LBBW high-rise, extremely high operating precision was required. And on top of this, all the tower crane components had to be positioned over and beyond the high-rise and the jib had to be assembled over the latter — no mean feat for crane operators Karlheinz Moll and Steven Ziellmann, who also had to contend with the fact that there was a wall blocking their line of sight and accordingly had to rely on their BMTI fellow team members to guide them by radio.

“In addition, the two high rise buildings provided wind effects that had to be included in our lift plans,” Karlheinz Moll and Steven Ziellmann said, while describing an additional challenge that required for both of them to stay extremely focused throughout the entire project. Fortunately, both their experience and the precise controls that characterize the AC 500-8 meant that they had the situation under control at all times and were able to complete the job on time.

“Just like we expected, our AC 500-8 proved to be the right choice once again,” Wilhelm said, while explaining that both the crane's and his team's performance exceeded his expectations.

The word “impossible” is not part of our vocabulary — this is the slogan that defines the comprehensive range of heavy-load logistics services offered by Bietigheim-Bissingen-based Wiesbauer GmbH & Co. KG. Its main area of business, which revolves around crane services, is effectively complemented by transport and industrial assembly services.

The company specializes in coming up with all-in-one solutions for its customers in all these areas, making sure to cover all the stages — from project planning to performance. In fact, Wiesbauer GmbH & Co. KG has been doing this for 60 years, and can rely on the extensive know-how that comes with this kind of experience and that has earned the company an extraordinary reputation that extends far beyond its native region.

The family business, which has branches in Stuttgart, Neckarsulm, Schwaikheim and Plankstadt, is managed by brothers Thomas and Jochen Wiesbauer.