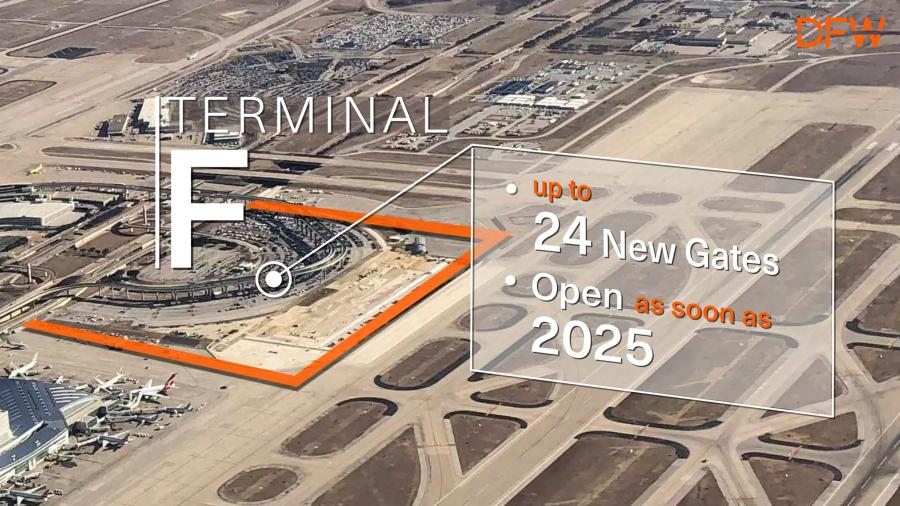 The identified site south of Terminal D provides significant flexibility for phasing in the number of gates for Terminal F, with a long-term projection of up to 24 gates, as demand for additional facilities is warranted.

Dallas Fort Worth International (DFW) Airport and American Airlines have announced plans to develop a sixth terminal, providing a long-term commitment from the airline and opportunities for businesses and customers in the fastest growing region in the United States.

The plans call for DFW to invest up to $3.0 to $3.5 billion in terminal improvements, including the construction of Terminal F and enhancements to Terminal C. The identified site south of Terminal D provides significant flexibility for phasing in the number of gates for Terminal F, with a long-term projection of up to 24 gates, as demand for additional facilities is warranted.

"Today's announcement sets the stage for DFW Airport's next 50 years," said Sean Donohue, CEO of DFW Airport. "The new Terminal F and the expansion that could follow will provide the region with the growth it needs to compete with international business centers. The Airport is growing faster than ever, and it needs to keep pace with the Dallas-Fort Worth economy to provide jobs and connections for businesses and families.

"We're grateful to Dallas Mayor Mike Rawlings, Fort Worth Mayor Betsy Price and Board Chairman Bill Meadows for their leadership. I want to especially recognize American for its commitment to DFW Airport. We look forward to working together to deliver what will be an efficient, modern terminal with a state-of-the-art customer experience."

"This is an exciting day for American and our more than 31,000 team members who call Dallas/Fort Worth home," said American Airlines Chairman and CEO Doug Parker. "American enjoys a wonderful relationship with the city of Fort Worth, the city of Dallas and DFW Airport, and we thank Mayor Price, Mayor Rawlings, and Sean and the entire DFW team for being such great partners. DFW is American's largest hub and a central gateway to our extensive international and domestic network. The plans we're announcing today will allow for the continued growth of DFW and ensure the airport remains a premier gateway for American for many more years to come."

"We look forward to accommodating the continued growth of our city and the region through infrastructure improvements and expansion at DFW Airport," said Fort Worth Mayor Betsy Price. "We're glad to see DFW's anchor carrier, American Airlines, headquartered in Fort Worth, collaborate with the Airport to take this area to new heights. This new terminal will further fuel economic development and job growth in our region."

"This is one of the most significant announcements in my eight years as mayor," said Dallas Mayor Mike Rawlings. "The fact that American Airlines believes in the DFW International Airport Board and management enough to make this tremendous investment in the future of the Airport is something we should all celebrate. This will further solidify DFW's standing as one of the best international airports in the world."

The design of Terminal F is expected to accommodate a changing aviation industry as DFW utilizes innovative technologies to facilitate the movement of customers, maintain cost efficiencies for airlines and improve operational performance.

Terminal C is one of the Airport's original terminals and opened in 1974. DFW and American plan to significantly improve the customer experience at Terminal C, bringing it in line with Terminals A, B and E, on which renovations were completed in 2018. Those renovations included redesigned check-in areas, larger security checkpoints, expanded concessions spaces, and improved lighting and flooring.

DFW Airport welcomed a record 69 million customers in 2018, and the Airport anticipates more passengers and air service to be added in the next two years than in the past two decades. In 2018, DFW announced 28 new destinations, giving it a larger domestic footprint than any other U.S. airport. Customers also have access to more than 60 international destinations from DFW, with double the number of European destinations and frequencies since 2015.

Over the past several years, American has expanded with additional DFW service, and by June 2019, the airline will operate more than 900 daily flights from the Airport. In total, customers have access to more than 230 nonstop destinations on American from DFW.