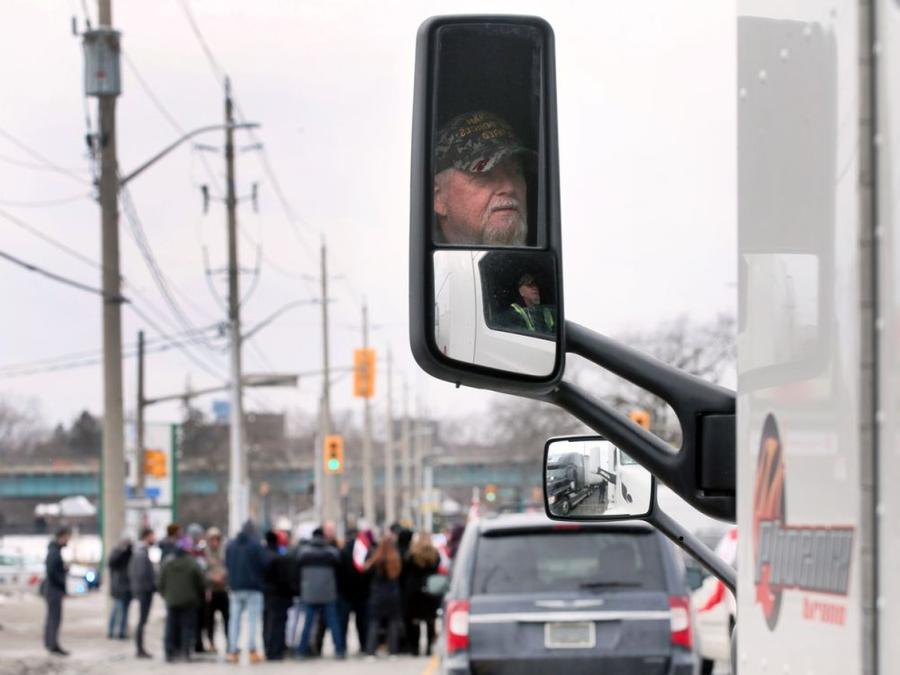 CBS reported that DHS has received reports of truck drivers planning to potentially block roads in major metropolitan cities in the United States in protest of, among other things, vaccine mandates for truck drivers.

The U.S. Department of Homeland Security (DHS) is warning law enforcement agencies that a group of truckers is planning a protest of COVID-19 vaccine mandates that could start as soon as this weekend in Los Angeles, the site of Super Bowl LVI.

The bulletin, obtained by multiple news outlets and reported Feb. 10, said the convoy could then head east, perhaps reaching Washington, D.C. in time for President Biden's State of the Union address on March 1.

Although DHS described the plan as "aspirational," it added that there is no serious indication it will happen, NBC News reported.

This new development comes as an ongoing trucker protest in Canada begins to hinder production at some U.S. auto plants that are running short on parts.

CBS reported early Thursday that DHS "has received reports of truck drivers planning to potentially block roads in major metropolitan cities in the United States in protest of, among other things, vaccine mandates for truck drivers.

"The convoy will potentially begin in California as early as mid-February and arrive in Washington, DC, as late as mid-March, potentially impacting the Super Bowl, scheduled for [Feb. 13], and the State of the Union address, scheduled for [March 1]," the DHS statement continued.

"While there are currently no indications of planned violence, if hundreds of trucks converge in a major metropolitan city, the potential exists to severely disrupt transportation, federal government operations, commercial facilities, and emergency services through gridlock and potential counter protests.

"According to law enforcement sources, the group intends to start in California and travel to Washington, D.C., reportedly gathering truckers as they travel across the country. It has also been suggested that truckers from Canada may join the Washington, D.C. event."

The warning was circulated to law enforcement nationwide Feb. 8.

If true, the DHS alert's convoy timeline differs from that reported by Politico the next day that noted the rolling protest was to get underway March 4.

The DHS bulletin also came after Ottawa declared a state of emergency as the so-called Freedom Truck Convoy used hundreds of parked trucks to paralyze the Canadian capital's business district.

American long-haulers appear to have taken their cue from their brethren north of the border, who have staged demonstrations since Jan. 28.

Canada's truckers, though, took their protests a step further the second week of February by protesting at a key crossing into the United States – effectively blocking traffic enough to close the Ambassador Bridge from Windsor, Ontario to Detroit.

And it does not appear that an end to the closure is in sight.

A midday update on the situation from the Windsor Star on Feb. 10 noted that the four-day blockade at the bridge was spreading. Anti-mandate protesters shut down Huron Church Road in Windsor, stopping traffic from using that access road to the bridge.

The city's police department, though, reported limited access to the Ambassador Bridge Thursday morning, and the northbound lanes to the U.S. are open, but traffic is at a complete standstill.

Another international gateway from Canada into the U.S. is also experiencing heavy vehicle congestion, the Detroit Free Press reported.

Traffic from the Ambassador Bridge is being re-routed to the Blue Water Bridge in Port Huron, MI where freeways and other roadways are overwhelmed and gridlocked, causing added pressure and wait times at that span.

The truckers protest also has heightened concerns about commerce in both countries and what comes next, according to the Free Press.

Both Detroit and Windsor have significant auto operations and the standstill is a huge headache for businesses that already have been suffering from global supply chain and local staffing issues.

Mike Wall, an auto expert with IHS Markit, told Detroit's WXYZ-TV that the Ambassador Bridge crossing is vital to the auto industry, and the longer the closure goes on, the greater the impact it will have on an already fragile supply chain.

"If this were to kind of continue on for multiple days, you're going to start to see the impact reverberate through the supply chain," he explained. "It doesn't take long to really have an impact in the broader supply chain and affect vehicle production."

According to Detroit International Bridge Co., the structure's owner, trucks carry more than $323 million in goods across the span every day. Wall noted much of that is made up of auto parts, engines and vehicles connecting nearby Canadian plants and suppliers to the Motor City.

"We're kind of one big happy family as it relates to automotive," Wall said of the Windsor and Detroit areas. "It's a perfect combination when all the cogs are working but, boy, when you get an interruption like that it can be incredibly disruptive."

Matt Moroun, chair of Detroit International Bridge, has called on officials "to alleviate the situation" in a manner that "reflects mutual respect," adding his family sympathizes with "those caught up in this blockade."

"We recognize that truck drivers are essential workers" and "the Canadian government has done a tremendous job with vaccine rates," he told the Free Press. "The Ambassador Bridge has a solemn obligation to facilitate safe and efficient international trade and travel."

It is unclear when the Canadian protest will end and what the endgame is for law enforcement and officials who said they "recognize the need to balance individual rights and freedoms with the need to maintain public peace and order."

If the Feb. 8 U.S. Homeland Security warning is true, it differs from the protest timeline that was reported by Politico the next day that noted the convoy was to get underway March 4 amid a growing clamor from those who believe their freedoms are under threat from government Covid-19 restrictions.

Organizers have dubbed their movement "the People's Convoy" and claim they are non-partisan, but many of those involved have ties to either former President Trump or the Republican party.

Politico reported that the mobilization, which has sprouted up mostly online and builds on almost two years of increasingly vocal coronavirus protests, has been championed by far-right influencers and rightwing politicians, including Trump and Rep. Marjorie Taylor Greene (R-Ga.).

The convoy also has garnered the attention of more extremist groups, including white supremacists, who have repeatedly shared their support for the anti-mandate protests that have become a rallying cry for similar movements across North America, the European Union and Australia, the online publication noted.

As part of the upcoming protest, multiple encrypted messaging channels — often with tens of thousands of supporters — have begun sharing tips on planning, fundraising and other technical support aimed at clogging major cities with trucks and other vehicles to voice their anger against Covid-19 restrictions, Politico noted.