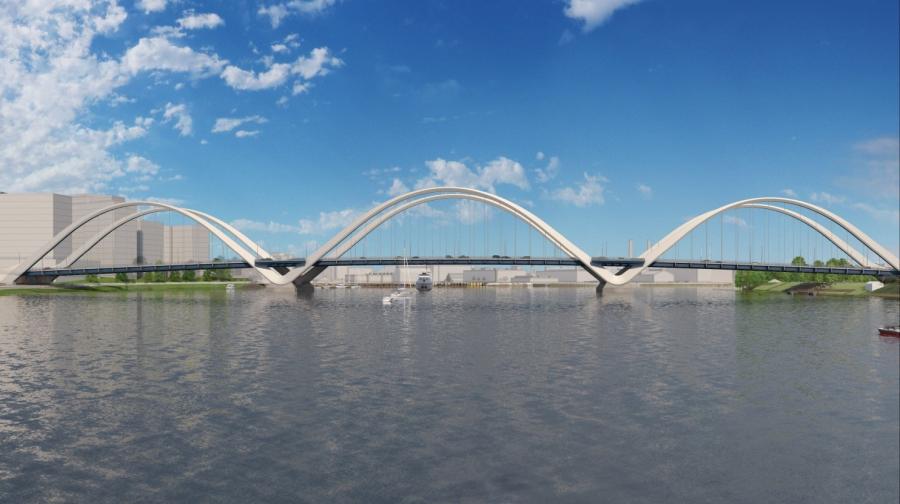 District of Columbia Mayor Muriel Bowser broke ground on a three-year, $441 million project to build a new Frederick Douglass Memorial Bridge to replace the 68-year-old bridge that spans the Anacostia River and has required special repairs and truck traffic restrictions for years.

Bowser said the work to build a new, wider bridge alongside the present one is part of a broader set of projects that include reconstruction of the Suitland Parkway/I-295 interchange plus rebuilding and widening South Capitol Street.

In all, that corridor reconstruction program — reported to cost nearly $1 billion — is the largest in the history of the District Department of Transportation, said the mayor and DDOT Director Jeff Marootian.

Bowser said that “once completed, the new Frederick Douglass Memorial Bridge will have a tremendous impact on our city's transportation network and economic growth.”

The existing four-lane bridge carries a reported 70,000 vehicles a day but has been rated both functionally obsolete and structurally deficient, suffers from corrosion and has already gone through several projects to rebuild its deck.

The work now under way will replace it with a structure carrying six traffic lanes plus bicycle and pedestrian lanes that include four on-bridge river-viewing stations.

DDOT's Marootian also said the new structure “will be designed and constructed with state-of-the-art technology and materials to ensure durability and low maintenance for the more than 100-year design service life.”