The PRPA currently receives more than 500,000 containers annually and when the dredging is complete, the port will be able to accommodate larger vessels and more cargo. 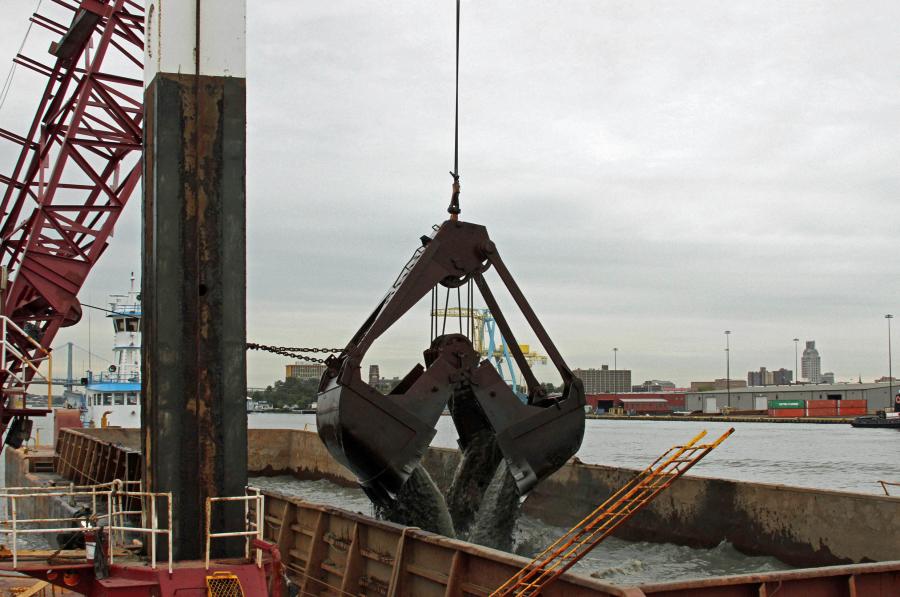 The Great Lakes Dredge and Dock Company will complete the eighth of 10 projects to lower the riverbed of the Delaware River in late August, which will allow the Philadelphia Regional Port Authority (PRPA) to increase its cargo capacity and create new employment opportunities in the area.

The $350 million (current estimate) Army Corps of Engineers/PRPA Main Channel Deepening Project began in March 2010 and is expected to be completed in 2017.

The goal is to make the port competitive with rival ports on the East coast. The PRPA currently receives more than 500,000 containers annually and when the dredging is complete, the port will be able to accommodate larger vessels and more cargo.

Representative Bill Keller (D-184th District) noted that the project could create as many as 10,000 new jobs and increase hourly wages.

The work is taking place within the Delaware Estuary and it borders Pennsylvania, New Jersey and Delaware. The main channel is 102.5 mi. (165 km) and covers the Philadelphia Harbor in Pennsylvania and Beckett Street Terminal in Camden, N.J., to the mouth of the Delaware Bay.

According to the PRPA, “The project follows the existing 40-ft. federal main shipping channel alignment. The existing authorized widths in the straight portions of the channel, ranging from 400 ft. in Philadelphia to 1,000 ft. in the bay, will not change. However, 12 of the existing 16 bends in the channel are being widened for safer navigation. In addition, the Marcus Hook Anchorage is being deepened to 45 ft.”

The deeper channel will provide for more efficient transportation of containerized, dry bulk (steel and slag) and liquid bulk (crude oil and petroleum products) cargo to and from the Delaware River ports.

Port officials noted that nearly 16 million cu. yds. (12.2 million cu m) of material are being removed during the initial construction of the project, which is being brought to five existing federal upland confined disposal facilities in New Jersey, Pennsylvania and Delaware. These federal sites have been used for channel maintenance since it was deepened to 40 ft. in the early 1940s, and they have sufficient long-term capacity to continue in that role for at least 50 years after the current deepening is complete.

“These sites will provide more than adequate long-term capacity,” they said, “but the material brought there will also be available for beneficial uses in other locations. About 150,000 cu. yds. of dredged material from the Army Corps' National Park, New Jersey CDF has been donated to West Deptford Township for use in its River Winds riverfront development project. The PRPA also funded the cost of transporting the material to the site. Nearly 4 million cu. yds. of the material is primarily good quality sand from the Delaware Bay and it is being placed along the Delaware Bay coastline for shore protection at Broadkill Beach, Del.”

Half of the sand from the bay was dredged and placed for initial construction of the Corps' coastal storm damage reduction project (dune and beach nourishment) at Broadkill and the rest will be placed at one of the federal upland CDFs (Artificial Island) under a future contract.

The Army Corps said that approximately 12 million cu. yds. (9.1 million cu m) consists of silt, clay, sand and gravel. The dredging is performed by hopper, hydraulic pipeline clamshell and excavator dredges, with a drillboat used for rock removal in the Marcus Hook area.

Close to $10 million has been spent in environmental analysis, which has concluded that deepening the channel “has no significant impact,” said Port officials.

“To ensure that the construction does not impact the natural resources of the region, the Army Corps has set up pre-construction monitoring to establish baseline information that the Corps, DNREC and other state and federal agencies are using to track the effects of the project. We are collecting data on sturgeon, oysters, horseshoe crabs, shorebirds, blue crabs and sand builder worms. The monitoring will continue after project is completed.”

So far, reaches AA, A, C, D and the Lower Portion of Reach E have been completed. Rock removal for Reach B started on Dec. 1, 2015, and the work on Upper Reach E is expected to be complete in 2017.

The Army Corps noted that the first construction window was completed on March 15 this year. The second construction window goes from July 1 to March 15, 2017. This work includes controlled underwater blasting of rock outcrops (permitted from Dec. 1 to Mar. 15) from southwest of the Philadelphia International Airport to Claymont, Del., followed by dredging and upland placement of blasted rock.

Going back to the late 1800s, the Army Corps has been involved in dredging projects on the Delaware and for more than 60 years its Philadelphia District has maintained the Delaware River at the authorized 40-ft. depth to ensure the safe passage of commercial and recreational vessels from Philadelphia to Delaware Bay.

Studies to dredge the shipping channel to 45 ft. began in 1983 and were studied at various government levels. It also led to political battles between Pennsylvania, New Jersey and Delaware, and environmental court challenges.

“Between 2001-2006,” noted the web page, “the Army Corps spent more than $3 million alone in additional environmental studies, the conclusion of which was the deepening would have 'no adverse impact' on the Delaware River. The impasse was partially broken in 2008, when the PRPA assumed local sponsorship and the historic Project Partnership Agreement was signed.”

A November 2009 Delaware court challenge to delay the project was overcome in March 2010.

Ken Goldberg, deputy district engineer of programs and project management, U.S. Army Corps of Engineers Philadelphia District, is pleased with the progress of the project.

“Most of the work is fairly straight forward, except for the rock blasting,” he said. “Once you start the blasting, you don't really know the full extent of how much has to be removed. We're confident that our estimates are in the ballpark. We're taking a multi-faceted approach to minimize the impact of the blasting on aquatic life, especially the endangered sturgeon. This has thus far proven successful. The dredging operations have just encountered the normal challenges one would expect — the kinds of delays that have been built into the schedule.”

Ed Voigt, the Army Corps' spokesman of the Philadelphia District, noted that funding was an issue in the early years of the project.

“We experienced delays,” he said, “but have still been able to stay close to our original completion date. Communications with contractors have been excellent and we've been dealing with problems as they arise. We revise the work schedule as needed.”

As mentioned, environmental concerns are an ongoing issue and the situation is being monitored on a serious basis.

“We work in seasonal windows to respect fish migrations and spawning periods,” said Goldberg, “and for impacts on species and also for water quality, we employ monitoring before, during, and after construction. Since construction started, we've enjoyed good, close cooperation with the state environmental agencies, as well as the National Marine Fisheries Service and other federal agencies.”

Bill Hanson, vice president of Great Lakes Dredge and Dock Company, said the company has been working on the project since the summer of 2012 on the four contracts it has won.

“The Army Corps set up the areas where we can work in advance and secures all the permits, approvals and authorizations and put all the designs together,” he said. “All we had to do was bid and execute the contracts as designed.”

The level of coordination and monitoring of the work, said Hanson, is based on a “get in, get it finished properly, and move on basis. We've been very diligent about making sure everyone agrees with what is being done.”

The current contract deals with removing intact rock material from the riverbed, which is being done with a combination of blasting and digging with the cutterhead drills.

“This is the most difficult work,” said Hanson, “but drilling and blasting can be done quite safely and efficiently. A lot of people are skeptical of this at times because if you use the word blasting, they expect a huge explosion. As a matter of fact, it's typically a rumble and you don't even notice it at times.”

The blasting products are made for the marine environment. Sturgeon monitoring, including preblast underwater inspections along with a relocation program, take place every day of blasting. The USACE conducted a soils investigation program, including multiple boring campaigns and resistivity surveys to narrow in on the rock formations. All blasting, dredging and survey monitoring operations are positioned by the most accurate GPS equipment available.

“We've worked in this area before, whether that has been maintenance dredging of the Delaware River, C&D Canal, Schuylkill River or constructing nearby beaches,” he added. “We're familiar with the lay of the land and the river. The folks that have been unique to the project are the pilots and we're getting to know them better. This is standard for us, whether it is the Delaware or the Mississippi rivers, the pilots are the ones who work the channel constantly and we want to respect them.”

For the rock removal operation, Great Lakes crews are using barges with excavator, clamshell and hydraulic dredges for the digging, as well as a specialized blasting barge. The materials — silt, sand, glacial till, boulders and solid rock fragments — are placed on barges that are taken to the waste disposal sites. Each dredging barge is accompanied by barges for the material transportation. Multiple dredges produce multiple material barge transits daily to and from the disposal sites.

The only subcontractors that Great Lakes has brought in for the project are for the Sturgeon Monitioring Program.

About 100 people work the tugs, dredges, barges, land equipment and survey boats, along with office and management staff for the project.

The equipment on-site is owned by the company, which serviced by on-site mechanics. The equipment includes a drillboat (Apache), a hydraulic cutterhead (Dredge Texas), a hydraulic excavator (Dredge New York), clamshell dredge 54 and 55, survey/crew boats, multiple tugboats, and support vessels/barges.

Due to the tight schedule and round-the-clock work, the equipment has to perform well.

Hanson noted that Mark Reid, Great Lakes's senior project sponsor, works on the bids and then on the projects themselves.

“He has done a very good job of tackling issues,” he said. “This project has been around for a long time and people are glad to see us come in and get the job done. Dredging is our specialty and we are the largest dredger in the U.S. We have a lot of different equipment, which gives us a variety of options to address challenging projects. Our crews and project managers are attune to the difficulties of a deepening project and have the experience to come up with solutions rapidly.”