Miraculously, the driver survived the crash without even a scratch. 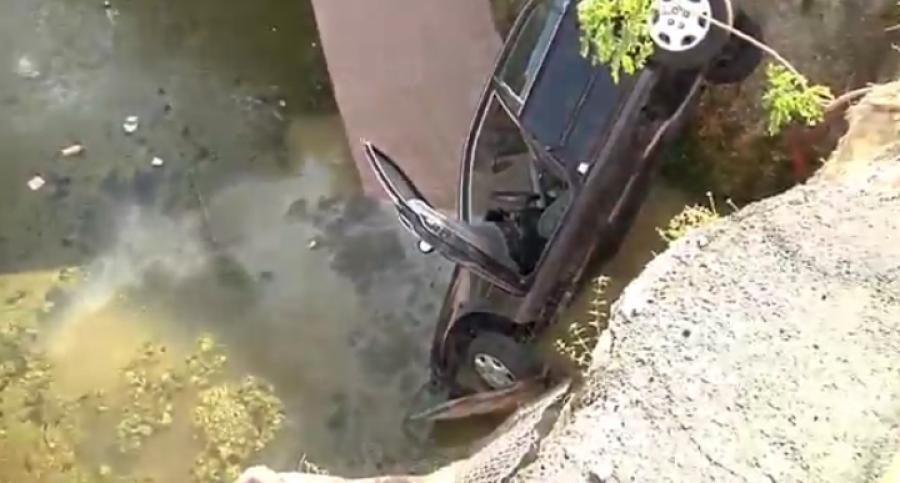 Image courtesy of WABC. Authorities were called to the construction site about 9 a.m. and found the car in the 10-to 12-feet-deep ditch.

Local Miami news affiliate ABC10 is reporting that A South Florida woman is doing fine after she drove her car into a large hole Tuesday morning at a construction site in Miami.

Miami Department of Fire-Rescue Capt. Ignatius Carroll Jr. said the driver plowed through a fence at the site before ending up in the ditch.

"(She) went through the bumper, over the bumper, hit the fence and went in the ditch," said Eddy Guerra, who works for the fence company.

Carroll said the woman was trying to park her car when the crash occurred. She survived without even suffering a scratch.

"The woman was actually standing on her door with her car face-down in about two feet of murky water," Carroll said.

Authorities were called to the construction site about 9 a.m. and found the car in the 10-to 12-feet-deep ditch.

"I saw this car going into the hole (and) I realized somebody must have been in the car," said Hortensia Velazquez, who called 911.

Authorities said the fence saved the driver's life. Had the fence not been there to slow down the vehicle, the impact and drop would have been more severe.

Authorities said the woman is a traveling nurse, who is based at a company nearby where the crash occurred.

Carroll said the woman was shaken up, but she was otherwise OK.