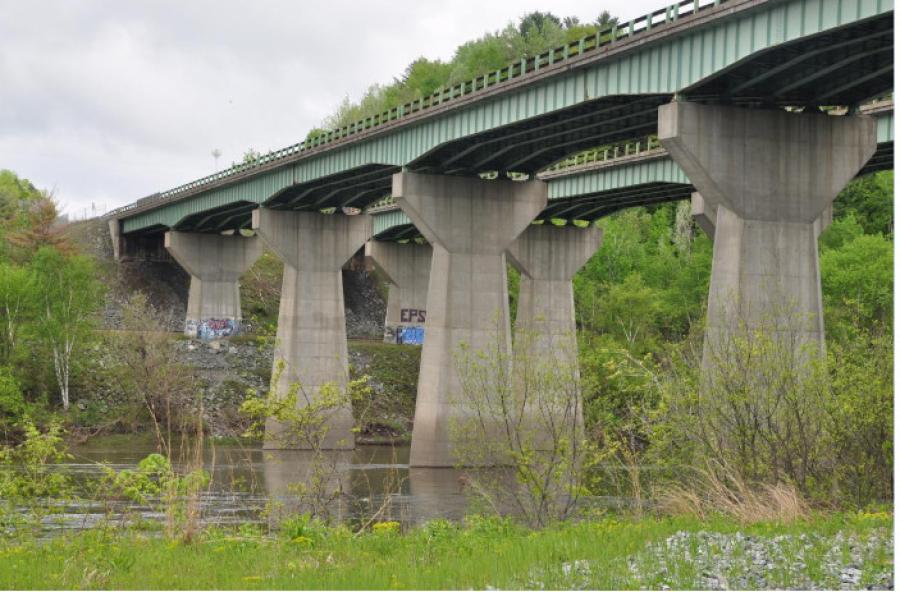 The 840-ft. “sister bridges,” which were constructed in 1966, carry about 41,000 vehicles a day and are showing “severe signs of distress,” according to a 2017 grant application the NHDOT submitted for the project. (New Hampshire DOT photo)

Work to rebuild the two New England bridges carrying Interstate 89 over the Connecticut River started in mid-September, but transportation officials say motorists won't see a major change in their commute for at least a year.

The new spans carry road traffic over the river between Hartford, Vt. and Lebanon, N.H.

Crews with R.S. Audley Inc., the major New Hampshire infrastructure contractor located in Bow, began site work on the $43.8 million project Sept. 15. Its first task is to build a new pier and deck that will serve as temporary travel lanes.

"It is a five-year project and we will spend the first year and a half coming up out of the river because we need to construct new piers between the two existing ones," explained Jeffrey Potter, an engineer with the New Hampshire Department of Transportation (NHDOT).

The multi-million-dollar project will address structural deficiencies of the two "red list" bridges, as determined by New Hampshire, that not only carry I-89 road traffic, but New England Central and Washington County rail lines between the two states. The structures' "red list" priority ranking means they're inspected twice yearly due to their poor condition. Other New Hampshire-owned bridges receive inspections every two years.

The 840-ft. "sister bridges," which were constructed in 1966, carry about 41,000 vehicles a day and are showing "severe signs of distress," according to a 2017 grant application the NHDOT submitted for the project.

"The concrete bridge decks exhibit signs of distress, including cracking, delamination, and efflorescence at various locations," read a separate 2014 report. "The lead-based girder paint system is failing as evidenced by cracking, flaking and peeling, and light rust has formed in many locations on the steel members."

The new I-89 bridge replacement project has a scheduled completion date of Sept. 26, 2025.

Aside from cranes working alongside the river, drivers may not notice the crews until 2021, he said.

Once work on the new travel lanes is complete, southbound traffic will be diverted onto them as workers remove the current bridge's deck and superstructure. They'll then widen the highway to create auxiliary lanes that will allow traffic to move more freely between Interstates 89 and 91, just to the west of the Connecticut River in Vermont.

Upon completion of the southbound bridge, construction will then focus on the northbound bridge, with traffic headed into Vermont diverted onto the temporary roadway.

The NHDOT also proposes closing the northbound lane overnight for up to a month sometime in 2022 so that crews can transport large pieces of steel, Potter said.

"We're just getting started and you're probably not going to see a whole lot going on for the next year," Potter said. "While it will still be an active construction site, it shouldn't impose real impacts to the traveling public."