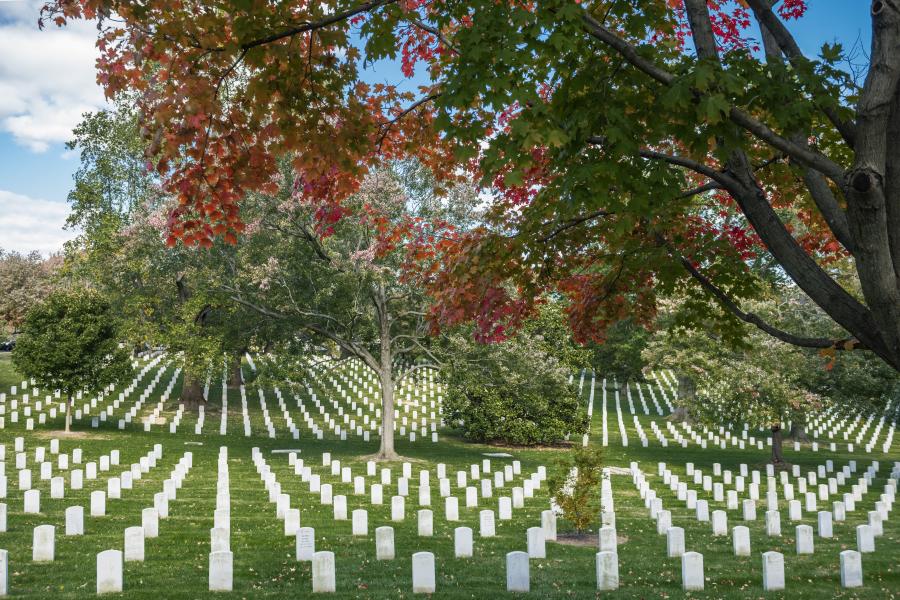 Work on the Southern Expansion of Arlington National Cemetery will begin in 2020. (Army photo/Elizabeth Fraser)

For its second act of expansion, Arlington National Cemetery plans to grow southward onto property formerly occupied by the Navy Annex. Work there will begin next year, said the cemetery's executive director.

Karen Durham-Aguilera spoke before the House Appropriations Committee's subcommittee on military construction, veterans affairs and related agencies. She told lawmakers the cemetery plans to break ground on the first phase of the project in 2020. She also thanked them for providing the appropriate funding to make it happen.

"With Congress's support, the Defense Access Road project is fully funded with $60 million and the Southern Expansion is partially funded with $219.1 million funding toward a $350 million requirement," she said.

Both projects, which include a plan to reroute Columbia Pike, which runs alongside the cemetery to the south; and a plan to develop reclaimed land and bring it up to the standards of the cemetery, are currently under way.

"Southern Expansion will add 37 acres of burial space and extend the cemetery's active life," Durham-Aguilera said. "We will continue to provide quarterly reports to Congress, outlining the progress of these important projects."

To move forward on the project, Durham-Aguilera said the Army is working with Arlington County, the Commonwealth of Virginia and the Federal Highway Administration.

Durham-Aguilera also told lawmakers about additional projects that have either been completed at the cemetery or are currently in the planning stages. Since 2013, she said, 70 infrastructure projects have been completed. Today, an additional 25 are under way.

"We have completed or are currently rebuilding more than eight miles of roadways, with approximately ten additional miles in planning or design," she said. "We have replaced about one-third of the cemetery's storm sewer lines. Since 2013, we have replaced more than 1,000 feet of sanitary line, typically, as an emergency repair. We plan to replace or rehabilitate an additional 5,000 feet to prevent further failures."

In submitted testimony, Durham-Aguilera said the cemetery also will do work on its administrative building where families gather in advance of a funeral.

In fiscal year 2018, ANC buried nearly 6,500 service members, veterans and eligible family members, Durham-Aguilera said. While the expansions will extend how long the cemetery can remain active, it will not be enough, she said.

"Expansion alone will not keep ANC open well into the future — defined as 150 years," Durham-Aguilera said. "The [fiscal year 2019] National Defense Authorization Act requires the secretary of the Army, in consultation with the secretary of defense, by Sept. 30, 2019, to prescribe and establish revised criteria for interment that preserves ANC as an active burial ground. Evaluation of multiple options is ongoing to inform the secretary of the Army's decision."

To help inform that decision about eligibility criteria, Durham-Aguilera said, ANC has, among other things, conducted two public surveys of nearly 260,000 respondents and held meetings and listening sessions with key stakeholders — including more than 25 veteran and military service organizations.

"Arlington National Cemetery's enduring mission is to represent the American people for the past, present and future generations by laying to rest those few who have served our nation with dignity and honor, while immersing guests in the cemetery's living history," Durham-Aguilera said. "We are committed to ensuring confident graveside accountability, our cemetery maintenance, our fiscal stewardship, and preserving the iconic look and feel of the cemetery."