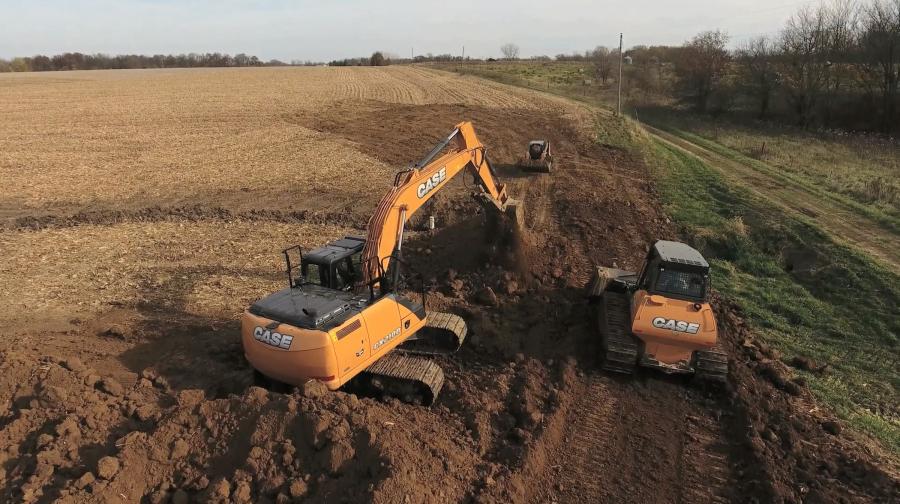 Wilcoxen Construction is an earthmoving and demolition company based in Avon, Ill. The business was founded in 1991, but Richard Wilcoxen has been moving dirt since he was a young man.

“When I was a kid I used to run around with the tractor and loader and try and build and fix wash-outs and dry dams,” he explained. “Then I got a bulldozer and just got bigger and bigger. I just like being outside and playing in the dirt.”

Wilcoxen owns a fleet of earthmoving equipment including dozers, excavators, CTLs and backhoes, and as an owner-operator he covers a lot of ground.

“We do lot of farm work, [earthen] dams and terraces. We've built quite a few ponds this year. We've done room additions. We've done large building demolition. We do septic tanks. We pour some concrete — a little bit of everything.”

The company recently purchased two new pieces of equipment from Gregg Kromphardt at Birkey's — a Case CX210D excavator and a Case 1150M crawler dozer. In both cases, each machine represented a step up in size and power from previous machines to allow his company to take on bigger projects. When it comes to purchasing decisions, Wilcoxen said that it comes down to a few simple things. “Reliability, parts available and quick service. If they're loyal to me, I'm loyal to them.”

Wilcoxen previously owned an older Case 9020 excavator, but he needed something with more power and a manageable footprint that would still work with his existing trucks and trailers.

“The CX210D, it was a little bit lighter [than larger models] and it had lots of power. I thought it had plenty of power and our dealer brought it out and we tried it and we really liked it. We looked at a larger excavator but it was a lot heavier and had to have more permits and a larger trailer to move it around.”

The CX210D weighs 48,973 lbs. (22,213 kg) and is powered by a 160 hp Tier IV Final engine. The excavator relies on a combination of selective catalytic reduction (SCR) and diesel oxidation catalyst (DOC) technologies, which helps maximize uptime and performance — all with minimal maintenance. There is no diesel particulate filter (DPF), no DPF regeneration or associated lifetime service costs. These technologies, combined with the Case intelligent hydraulic system, make the CX210D among the most powerful and efficient Case excavators ever introduced, according to the manufacturer.

Wilcoxen is already impressed by the excavator's fuel efficiency, speed and smooth operation.

“This CX210D, it will do twice the work or more and burns half the fuel. The most we've ever burned in a 12-hour day was about thirty-six gallons. If you've got a machine burning forty gallons a day at $1.80, at $2 a gallon, that's a savings of $80 a day. If you figure that up over thirty days, that makes a payment.”

“It's quiet and it burns hardly any fuel. It's got plenty of power and you can set it for how much RPM's you want and how much your hydraulic pumps pump. If you're really into something tough, you can turn it up and it's smooth and fast.”

The CX210D features a new electronically controlled pump, a larger control valve and multiple sensors — all which combine with the Case intelligent hydraulic system (CIHS) to make the best use of the machine's power and momentum to achieve cycle times up to 9 percent faster.

“We do a lot of dirt work where we load semi trailers and you don't want to be paying a semi $100 an hour to sit around waiting on you,” said Wilcoxen. “We tore out a levee and had twenty-two trucks and they never waited — we were waiting on them. About five buckets full and we had a semi loaded. It was fast.”

Power and speed are always important, but the ability to operate smoothly also is important to Wilcoxen.

“You don't want a machine jerking, we put in a lot of pipe and work on some bridges and sometimes we use the excavator to set beams down in there. You want something really smooth — you don't want it jerking around.”

Greater Dozer Power With the 1150M

“We had an 850 for about a year or so and we got to tearing out trees and we were tearing out trees bigger than the 850 would push, so we wanted to get a bigger one,” Wilcoxen said. “They brought us this 1150 to try and it rode well, it's quiet. It's comfortable and you can set the speed forward and back, how fast you want it to go from forward and reverse.”

“It'll push a lot more. It's a little bit bigger. The 850 was a 4 cylinder, and the 1150M is a 6 cylinder. It's got more torque in it. It rides a lot better. It's just heavier. I think it's more comfortable than the other one. They've changed the seat in them. Air ride seat, and the controls are a little bit smoother to run. The machine has a lot of improvements on it.”

The 1150M dozer features customizable steering, shuttle and blade settings that allow the operator to fine-tune the machine to the task at hand.

“If you got finish work like grading a parking lot, you can slow everything down and do a lot better job than if you get out where you're wanting to really move some dirt, you can speed everything up. It's nice that way.”

Wilcoxen and his team will often handle basic maintenance items, but Birkey's handles all of their planned maintenance that is covered through Case ProCare.

“They come out and they change the oil and everything in them for us. They come right out to where we're working and do it. They're real good about that.”

Wilcoxen Construction will continue to grow, and as the jobs get bigger, Wilcoxen has been considering even larger machines.

“We've got some terrace jobs to do. We've got one big levee job to do and a terrace job, and if we get a couple more of them, we're talking about getting a 1650M.”—CEG