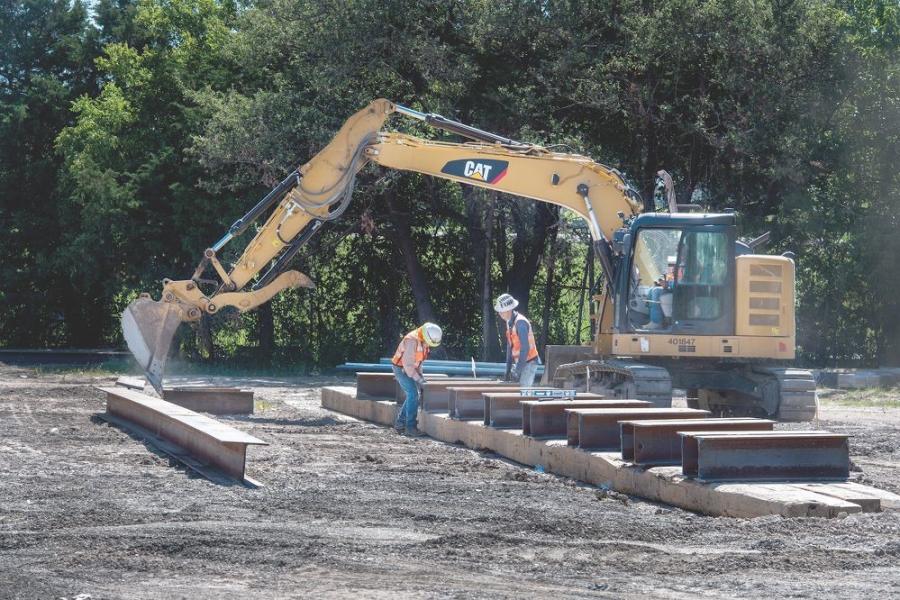 SEMA Construction is the general contractor working to replace the 50-year old Seagoville Road twin-bridges over I-635 in Dallas.

Accelerated bridge construction (ABC) was the method chosen by SEMA Construction to replace the 50-year old Seagoville Road twin-bridges over I-635 in Dallas to minimize the impacts on traffic using the busy highway.

SEMA Construction Inc. crews demolished the existing northbound bridge and replaced it with a new span on the weekend of Aug. 28 to 31, and then repeated the same process for the existing southbound bridge. Both bridges were 219 ft. long and had four lanes. 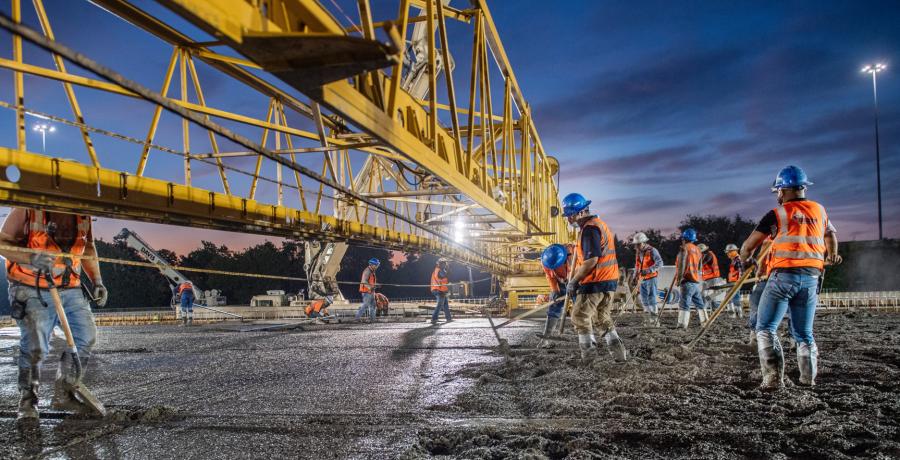 The project began last May and crews are expected to leave the job site in late September, following the clean up and punch list items.

The $9.21 million project has been in planning for several years.

Each bridge consists of 15 prefabricated concrete pieces: 250,000 lbs., including guard rails. SEMA established five fabrication yards to form the pieces, alongside and parallel to the existing bridges so that they could be rapidly placed.

The new bridges were designed by TxDOT's Bridge Division.

"The ABC method marks a paradigm shift in the project planning and procurement," said Danielle Boyd, a TxDOT public information officer of the Dallas region. "It uses innovative planning, design, materials and construction methods min a safe and cost-effective manner. It also reduced the on-site construction time from months or years to just a few days. We chose this approach due to high traffic volumes on one of the busiest highways in North Texas and the lack of logical detours.

Cranes were critical to the success of the project and a Liebherr LR 1400 lattice boom and Demag CC2500 were utilized to lift and place the prefabricated pieces into place.

"The cranes did not work in tandem to lift the units," SEMA's Project Manager told Construction Equipment Guide. "One crane handled loading the units and the other picked off of the loaded truck and set it in the final position. During the milestones, the crane setting the units in final position performed a dry run of the critical picks before the unit was rigged up to the crane. It took approximately 40 to 60 minutes to lift and place a unit."

Nothing was left to chance in terms of maintenance in case a crane experienced issues.

The construction process began months in advance when crews started to prepare the bridges for the eventual demolition.

"The old bridges were safe, but they were over 50-years-old," said Boyd. "It was time for the bridges to be replaced. They could have been rehabilitated, but we chose to replace them. This is a busy roadway."

While TxDOT has no immediate plans to use this method for other bridge projects on I-635, it is keeping its options open for future opportunities.

The fabrication yards, adjacent to and close to the bridge sites, were established in May and June.

"The yards were large enough for SEMA's needs and were quickly established," said Boyd. "The materials to manufacture the [concrete] bridge pieces were delivered on an ‘as needed' basis."

Each bridge took approximately10 hours to demolish from the start to the cleanup of debris The debris, allowed to fall to the ground, was cleaned up prior to moving to the next activity.

"Things went as planned," said Boyd. "If any issues came up, the appropriate parties were notified. Effective and constant communication made all the difference. Crews worked around the clock to get the project completed."

The traffic plan for the demolition and reconstruction was based closing the lanes on I-635 from 7 pm on Friday to 5 am on Monday. Detours were established to reroute motorists from the work zone. Message boards were set up to remind motorists to exercise caution when entering the work zones.

The demolition and reconstruction of each bridge was completed in 54 hours, and due to the equipment being well maintained, no repairs were required during these operations.

"SEMA, the subcontractors and TxDOT had weekly meetings to provide updates to keep all informed," said Boyd. "Work was performed day and night."

Peak days had several SEMA and subcontractor personnel on-site, with local and regional subcontractors brought on board.

The demolition generated approximately a fair amount of concrete and rebar.

In the Dallas area, SEMA purchases and rents equipment from dealerships such as Joyce Crane and Sterling Crane.

"An estimated 142,000 to 154,000 drivers traverse the busy roadway each day, and 11 percent of those vehicles are large trucks," she added. "The project sits in the area near where I-635, I-20 and U.S. 175 converge, which would have likely led to extensive backups for extended closures that would have occurred with typical bridge reconstruction."

"We used the ABC method before, but in this case, the method was not used to reduce construction costs," said Boyd. "Project materials vary for each project and the construction company."

Numbers at a Glance