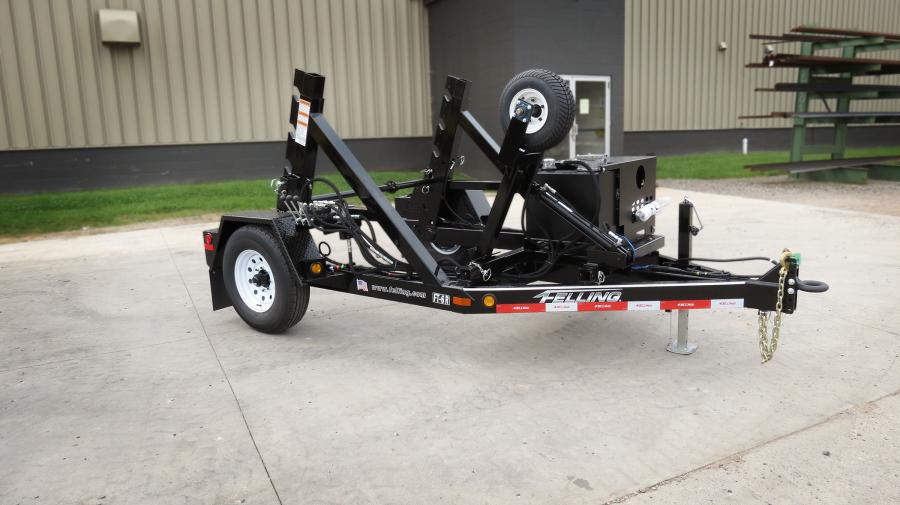 "We install, splice and test SDGE's fiber optic and copper communication cables between substations. Recently, we have been installing a fiber optic cable 1 foot above a 16 in. gas main," said Dale Thompson, an outside plant supervisor of Southland Electric Inc.

Southland needed a few cable reel trailers to free up its Telsta, a bucket truck with a reel carrier on the back, to do aerial work where it is needed. When conversations first started, Southland was looking at Felling's FT-14 R cable reel trailer.

Thompson worked with Mark Rapp, Felling's utility and telecom product manager, to ensure that they ordered the right trailer for the project. After reviewing the project's needs, Thompson decided that the FT-6 R would be sufficient for the company's current needs.

Southland took delivery of its first FT-6 R cable reel in May; the trailer was equipped with hydraulic retriever/take-up, rim drive, with a self-contained hydraulic power pack.

"I was thoroughly impressed with our new FT-6 R reel trailer. It's a beautiful cable dolly. Hydraulics are very well done. Very sharp in appearance. Very easy to use," said Thompson.

"On gas projects, we start the process with a 4,500 ft. reel of fiber optic cable. The gas line is being installed in the middle of the street, so at the end of the day, the cable has to go back on the reel so we can lower it into the trench and then cover it with steel plates," said Thompson.

"We are only trenching 150 to 200 ft. a day, so we have to figure 8 the entire reel of cable so that we have a starting end of the cable to pull under any gas, telecom, cable, etc. they encounter. Then we use our new Felling FT-6R trailer to wind up the cable and put it back in the trench."

The process of "figure 8'ing" allows a contractor to park the trailer mid-span of the run and pull it in both directions. The cable has to be emptied from the reel and laid on the ground, laying it in a figure 8 pattern, it prevents it from being twisted as it is pulled in two directions.

Not knowing how much material they will need or what they are going to run into they figure 8 the entire reel. Once the material is pulled through the obstacle, they load the material back on the reel, and it then can be deployed by driving along the unobstructed trench.

With the first FT-6 R in service, an additional one or two reel trailers were still needed, these would need to be a bit more customized for the project application. Thompson had two more projects coming up that would need the capacity for 38 in. reel, (50 reels total), which would require the rim drive to be extended by another 2 in.

Customizing a trailer to a customer's needs is Felling's forte, Rapp worked with Felling's engineering and weld teams to execute this request.

The hydraulic drive was extended to accommodate the turning of a 38 in. diameter reel, allowing for the rim drive hydraulic retriever/take-up system's smooth operation. The additional one or two trailers have turned into three to date, with a happy customer getting their projects done.

Southland Electric Inc. is a locally-owned and operated electrical contractor which was originally established in 1977 and later became a 100 percent woman-owned business in 2014. The company serves customers in San Diego and across Southern California with a complete range of services, capabilities and experience related to commercial, institutional, and industrial medium and low-voltage systems.