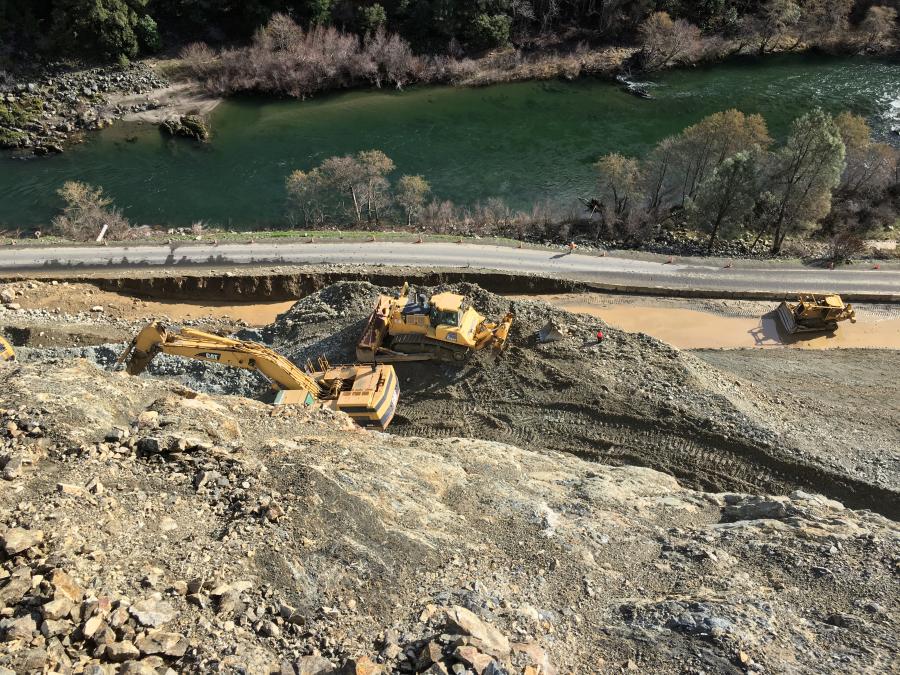 Crews from Stimpel-Wiebelhaus Associates were tasked with correcting a landslide that brought down a massive amount of rock and earth and revealed a fractured and fragile mountainside in northwestern California.

Referred to as a "HeleSlide" by the California Department of Transportation (Caltrans), a major landslide occurred in 2019 along State Route 299 between Junction City and Willow Creek in Trinity County (northwestern California) that brought down a massive amount of rock and earth and revealed a fractured and fragile mountainside along the critical highway.

The slide took place between Helena and Big Bar. Fortunately, there were no fatalities, however, the situation needed to be rectified sooner rather than later. Caltrans, understanding the seriousness of the situation, declared it to be an emergency and awarded a contract to Stimpel-Wiebelhaus Associates (SWA) to remove the debris from the highway and engage in slope excavation and bench creation in an effort to protect the area from future landslides. 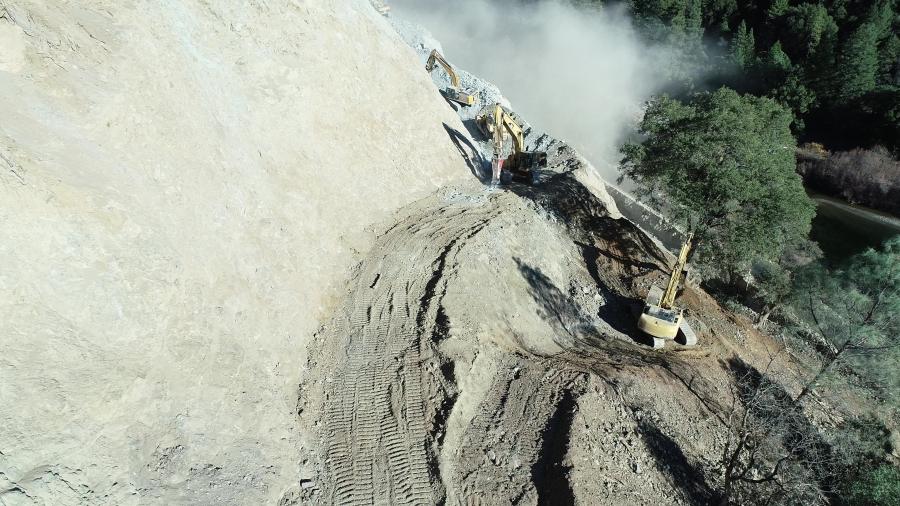 SWA successfully delivery the project over the summer and this section of SR 299 is now operating normally. The $14.5 million contract was increased to $17.4 million as the work progressed.

Over the course of one year, along a 1.3 mi. construction zone, SWA removed and excavated  80,000 cu. yds. of rock, earth and other debris from the road and hillsides. Approximately 200,000 cu. yds. of material were removed in total.

Caltrans estimated that the highway would be cleared by last February, but the nature of the slide and the steep sides of the canyon required SWA crews to be careful and cautious as they removed material from the hillsides that could have loosened in the future and tumbled onto the road. The goal was to strip the hillside of material to reach bare rock.

SWA had to utilize special "spider" (walking) excavators that were able to engage in operations on steep banks and above drops.

"Early on, they were trying to get traffic through in a timely fashion, with two or three spider excavators at the top," Caltrans Information Officer Chris Woodward told The Trinity Journal, who also noted that small excavators were used to clear the earth on the highway. "That took a while, too, but we wanted to make sure of the stability of it all."

"It was originally considered a potential drill and shoot project," said Corkey Harmon, Stimpel-Wiebelhaus Associates' owner and president, who also oversaw the project, "but because of the dangers of bringing down more of the mountain, we opted not to. You didn't want to bring more down than you bargained for. Blasting has vibration hazards even though you take all the precautions you can. The mountain was so fractured and had what geologists call a ‘rotten zone' in the middle of it, which caused the initial slide to begin with. 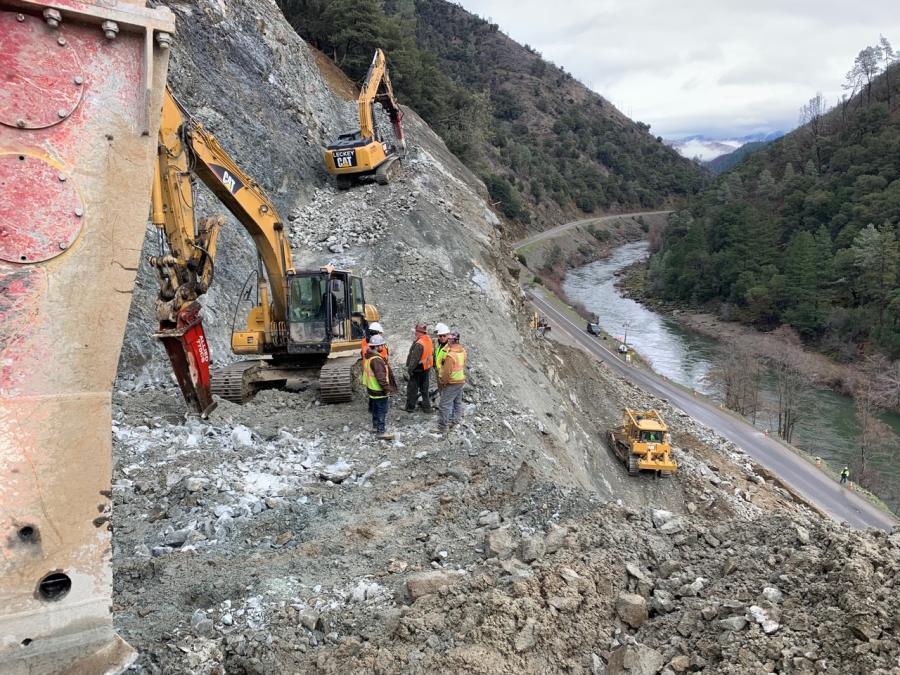 "After we got to the top, it was a slow operation because we were working on such a narrow work bench," said Harmon. "It was hazardous the whole time because you constantly had to watch what's above you. We had quite a bit of equipment and fortunately nobody got hurt. We did have occasions when rock tumbled down on equipment."

At the top of the mountain was an old stage road, which was the original access road to the coast. Prior to the landslide, it was a two-lane jeep road with phone lines buried beneath it. The original slide began below this road, but a few months later, there was a failure at the top.

"It was originally one landslide, but when we got half-way down, it broke again and we had to go back to the top and break up more of the mountain," said Harmon. "When we did, that took the old road out. We had one small field office trailer on the west side of the work zone. To haul the materials out, we initially had to develop an access. We had to close the highway down to one lane and build a retention basis to catch all the rocks as we were not allowed to place any rocks into the river."

In the end, three benches were established on the mountainside for the crews to conduct their operations.

"We never worked above or below each other," said Harmon. "We had guys that would be further down the slope horizontally and you could work above them as long as they were not directly below you. Originally there was only one bench, but when we went back to the top, we had to create a second one. We maintained it as a catch bench and were able to go back into it after we stabilized it. 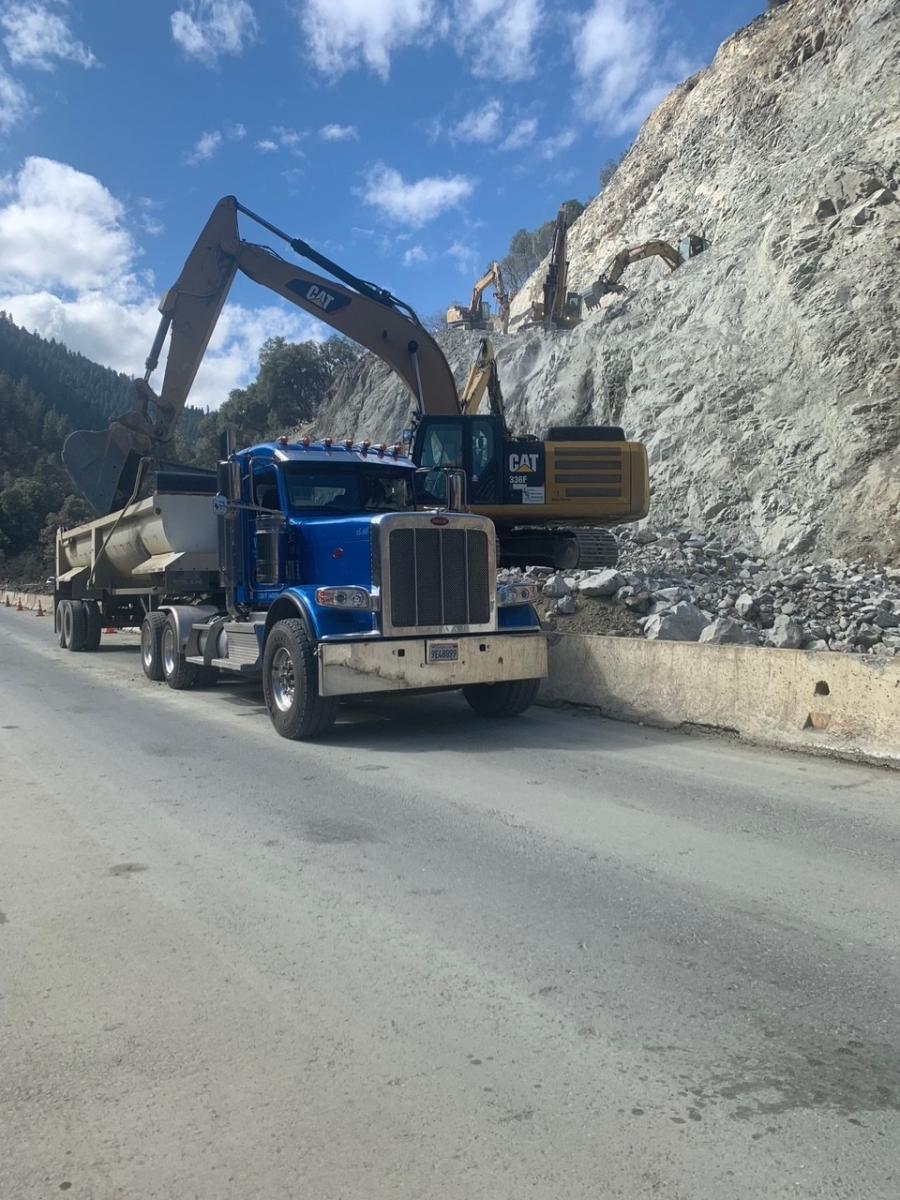 "Establishing the benches was not easy as we were working on fractured rock and were going form solid to fractured rock and then back to solid rock, trying to find composite rock that was stable," he added. "You had to bring it all until you reached the specified design elevations and width above the highway."

When conditions were positive, the crews were able to maximize their efforts. The work was done via day shifts.

"There was a point when we were able to bring in spiders — small steep ground excavators that attached to cables and then lowered down with winches into areas where you were not allowed to access with conventional equipment," said Harmon. "We were back sloping down quite a bit with the smaller equipment cutting slopes and then you had to do a lot of drilling. Following this, you had to clean up all debris."

Carlton Construction was the subcontractor that brought in and operated the spiders.

SWA utilized Cat and Komatsu excavators and dozers, along with a large Link-Belt 800 excavator (180,000 lbs.). The debris at the bottom of the mountain was placed in semi-end dump trucks

"The rock was always hard on the equipment and it was better when it didn't land on the pieces," said Harmon. "When we were running the hydraulic hammers, the constant vibrations were very hard on the machines and the hydraulic systems."

"We pretty much carved it out," said Harmon. "Some of the excavators had catch buckets and we would dig until we hit rock that we needed to break with the hammers to retain our work bench."

Much of the material that was removed was taken to Eagle Rock Inc.'s quarry in Junction City, Calif., about 12 mi. from the site, to be recycled.

Harmon also served as the safety officer, noting that the monitoring was based on visual sightings.

"We had periodic visits by geologist Scott Lewish of Caltrans, who would go above the benches to examine the terrain and make sure that cracks were not developing," he said. 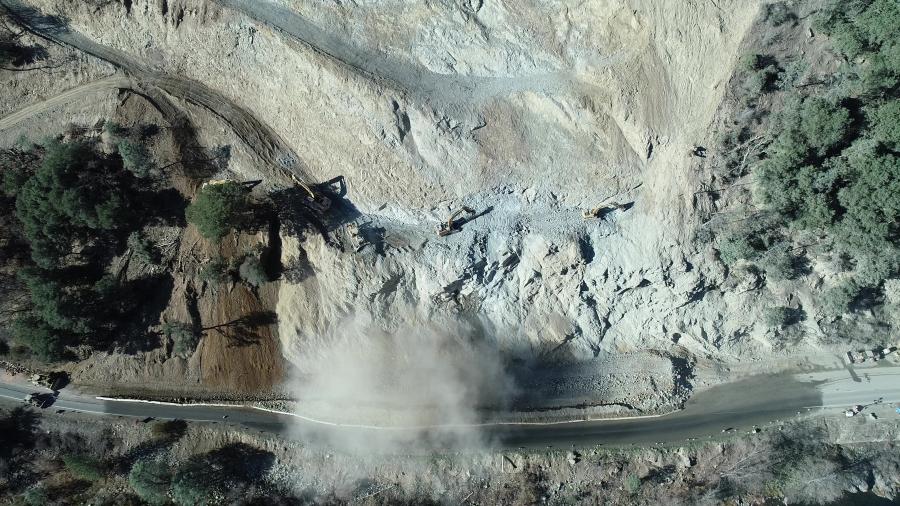 The suspensions, due to the rains, only lasted for a few hours as the water flowed down the slopes.

Harmon was assisted by Foreman Cameron Harmon and Construction Manager Greg Tyler, who handled the paperwork for the project.

"We had a great crew that worked very well together," said Harmon. "We had a lot of seasoned operators, what we call steep ground operators, that have the experience of working on mountain sides."

The operators were provided by the operating engineers union. Traffic control services were provided by Rader Excavating, which used portable signal equipment to control the traffic on the single lane for 14 months.

Much of the equipment repairs revolved on the hydraulic hammers that were worn out and had to be rebuilt or be replaced on a few occasions.

"They were servicing our equipment, getting parts to us as quick as possible," said Harmon. "We were so remote out there, that when we broke a hydraulic line, it was so far into town."