Empire Paving Rules Over I-95 Interchange Project in Stratford 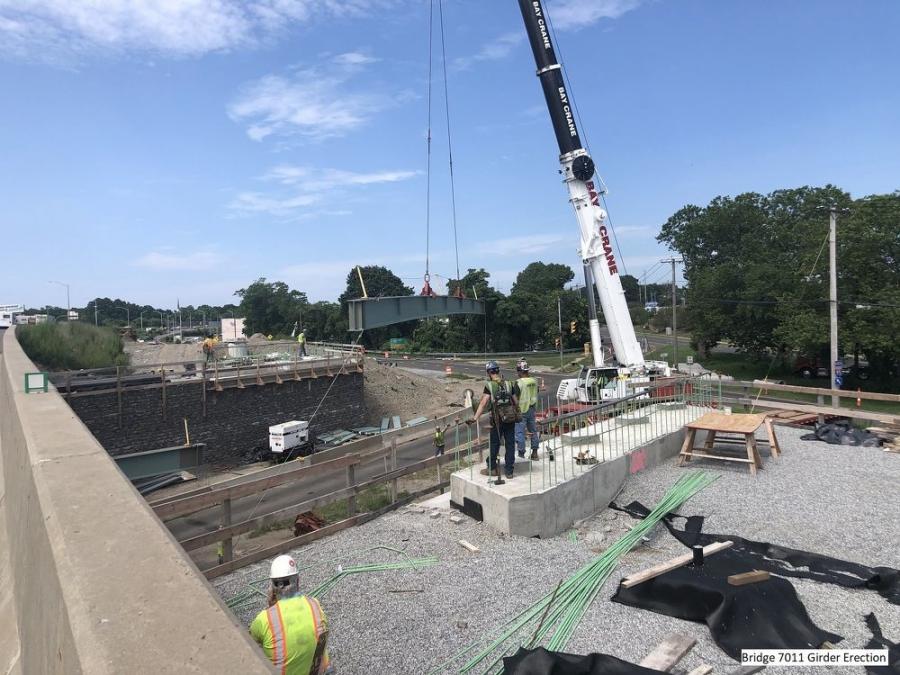 In the next 14 months, Empire Paving Corp. will be delivering the Connecticut Department of Transportation's (CTDOT) $28,857,927 Reconstruction of Interchange 33 on Interstate 95 in Stratford project, an initiative that is helping the state address the infrastructure deficit and improve traffic flow by providing motorists with more options.

The work, taking place on the southern side of the town of Stratford (Fairfield County), began in June 2020 and is scheduled to be completed on July 5, 2022.

The project is financed by the federal (80 percent) and state (20 percent) funds and Empire Paving was awarded the contract on Sept. 3, 2019, which gave the contractor sufficient time to plan the project and assemble equipment and personnel to execute it. 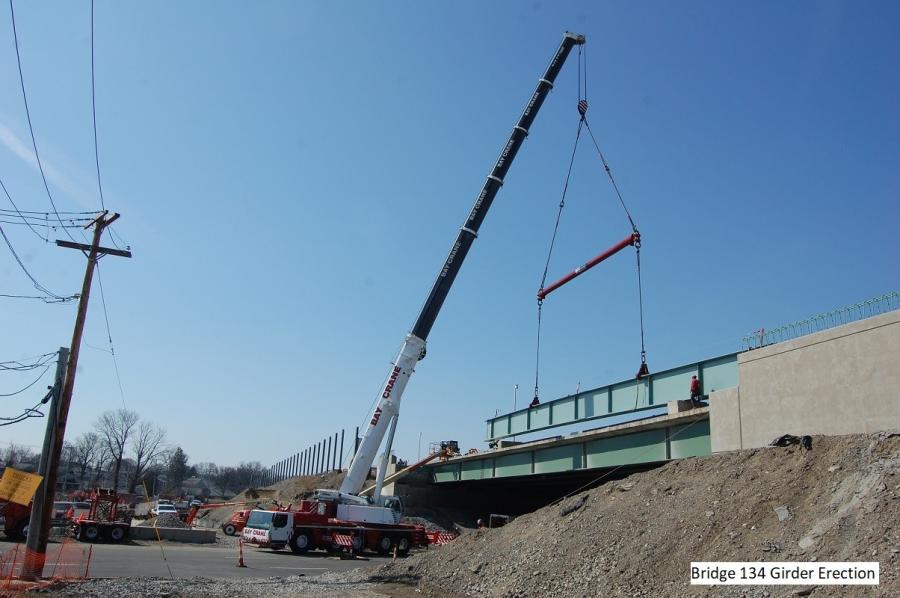 The interstate and interchange were constructed in the 1950s and on a daily basis both carry approximately 142,000 cars and trucks. In addition to reconstruction, the project is adding an Exit 33 off-ramp in the southbound lane direction and an on-ramp in the northbound lane direction to make it a full interchange. There also will be roadwork on Ferry Boulevard and Barnum Avenue Cutoff with minor road configurations and traffic signal work, as well as drainage improvements.

"The existing condition of I-95 was/is in good shape due to the construction activities from the Moses Wheeler Bridge Projects that CTDOT recently performed," he added, "however, the condition of the local roads was, and is, in poor shape."

STV and CTDOT designed the project.

"The intersections on the local roadways are getting updated, including the installation of modern traffic signal equipment with improved video detection versus less reliable loop detector systems, which will enhance traffic flow and efficiency," said Herbert. "It is also addressing the removal of Raymark Waste within the project limits, as well as capping all areas containing asbestos contaminated soils. As part of the project, $4 million is being invested in the construction of new noise barrier walls to help mitigate noise from the interstate.

"Projects often present unique circumstances that require special handling," he added, "This one required the removal of Raymark Waste that contains asbestos and other contaminants and must be removed from the site and disposed of properly. This necessitated coordination with the EPA, CTDEEP, CTDOT Office of Environmental Compliance and the town of Stratford's Environmental Office. This issue was resolved by removing all Raymark Waste within the project limits and coordinating with the EPA and DEEP to dispose of it in the newly constructed EPA landfill. As for particular challenges, the limits for Raymark Waste removal fell within the southbound I-95 off-ramp construction. The EPA landfill was still under construction at the time, so the removed material had to be temporarily stored and monitored in the designated Waste Stockpile Area [WSA] until it was disposed of."

The construction of the new off-ramp utilized all native material from within the project limits.

"Since all the soil within the project limits was deemed asbestos contaminated soil [ACS], the goal was to use as much, if not all of the soil to construct the ramp and cap it with clean material to limit the need for off-site disposal," said Herbert. "Some of the challenges in dealing with the ACS was the need for constant air monitoring to ensure the safety of the workers and the public. Working with ACS meant the soil had to always be moistened to limit any fugitive dust, and on a daily basis any exposed soil at the end of the workday had to be protected. In the case of the latter, Empire Paving chose to cap the native soil with a clean process where possible. Any vertical faces where soil would not stay put were covered with poly, so it was necessary to plan to make sure all work could be protected at the end of each shift."

"The Bridge 7011, the new southbound I-95 off-ramp over Barnum Avenue Cutoff, utilized a Geosynthetic Reinforced Soil — Integrated Bridge System [GRS-IBS]," said Herbert, "which kept the cost of the bridge the same as a traditional cast-in-place concrete construction, but was able to reduce the time needed to construct the bridge."

The maintenance and protection of traffic plans protecting motorists and construction workers are based on lane closures that occur on I-95 southbound from 9 p.m. to 6 a.m. and on the northbound side from 7 p.m. to 4 a.m. Two travels lanes in each direction are being maintained, with people being urged to "be alert, cautious, and to maintain a safe speed when driving in this vicinity."

"They have been working effectively, and most motorists are reducing speeds in the work zones," said Herbert. "The CTDOT appreciates their cooperation to help keep our workers safe while we deliver this project for the public." 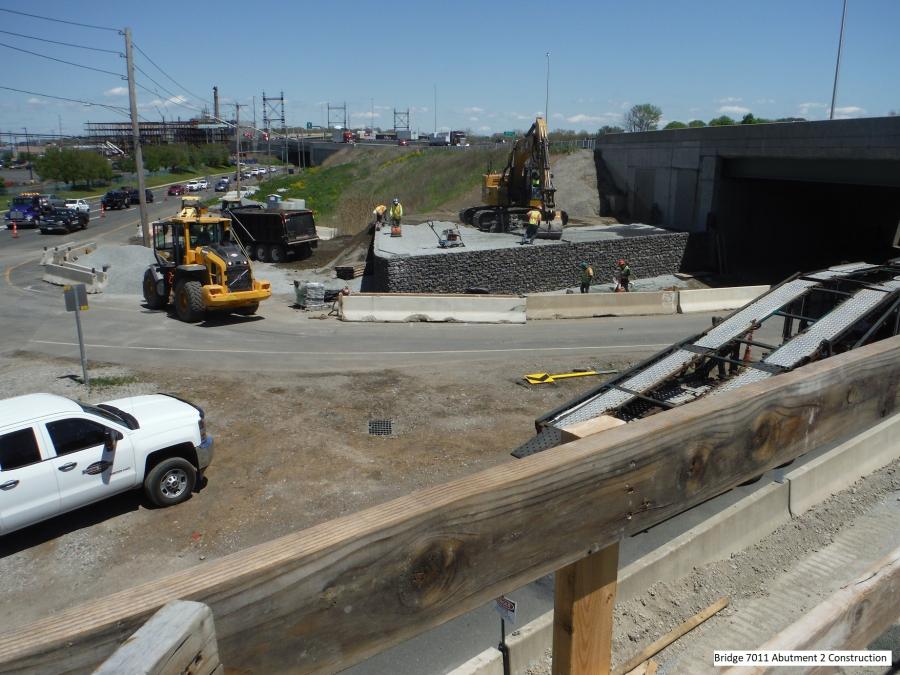 The construction of the Exit 33 off-ramp in the southbound direction began in March 2020 and is still under construction. Empire Paving, thus far, has completed New Bridge 7011, retaining walls 101 and 102, the removal of Raymark Waste, the local roadway drainage and a major portion of the traffic control signal work.

"The remainder of the work is focusing on the completion of retaining wall 103, noise barrier walls 1, 2 and 3 and the completion of the reconstruction of local roadways and ramp tie-ins," said Herbert. "The on-ramp in the northbound lane direction will be completed in the late fall of 2021. The roadwork on Ferry Boulevard and Barnum Avenue Cutoff [approximately 0.5 mi.], which includes minor road configurations and traffic signal work, is also going according to schedule."

"The work has been slow and steady," said Chris Goddard, Empire Paving's project manager. "We have had a lot of engineering challenges to overcome before we can start on doing a lot of the work. We've done a lot planning and things have reached a point where we're getting a lot done, primarily through day shifts. We worked all winter long. It's a very tight work zone. We are using some of the real estate of the project to store materials for next stage. As we go from one area, we use the complete section for storage. Deliveries have to be carefully considered.

‘We have a very good relationship with the DOT and issues are resolved as quickly as possible," he added. "They put great effort into any issues we bring up. Some things take time, but they get resolved."

The reconstruction began with the drainage infrastructure installation in May 2020.

"We did a lot of pre-emptive drainage work and then we started the cut and fills for the ramps," said Goddard. "The remainder of drainage work will have to be done after the retaining walls are completed. We're 80 percent complete at this point. This wasn't easy for sure — there was a lot of deep drainage with fairly unstable material, but it all went off without a hitch. The challenges for the cut and fills were due to presence of asbestos in the soil. We have a comprehensive dust control program, but one of the main methods we're utilizing is spraying atomized water on all the excavation operations and it seems to be working very well."

The fill operations also were supported by the use of a water mist cannon to dampen the dust, which was supplied by Rain for Rent.

The construction of the Exit 33 off-ramp in the southbound lane direction is nearly complete.

"With the exception of retaining wall 103, it has been completed," said Goddard. "The wall is just west of Route 1 and it starts widening out the deceleration lane that has not been completed. There were some engineering problems early on with that and we're just starting construction on this wall. It will take the rest of the construction season to complete. We did all the cut and fills, built the bridge for the off-ramp bypassing the area where the retaining wall so that we could keep working, and built the rest of the ramp."

A John Deere 700K dozer equipped with GPS systems has aided this work.

The on-ramp in the northbound lane direction was completed last year.

"It was done the same way as the off-ramp, with the same equipment," said Goddard. "The exception was that we had to widen bridge 134 at I-95. After the abutments were completed, there was a delay in the steel fabrication due to COVID. We waited for the steel to be delivered to the site until this spring and we're just about to complete the bridge deck. We demolished the existing bridge 134 Parapet to allow for the widening. The rest of the ramp was built on a fill. The work went quite well."

For the demolition work, Volvo and Cat mini-excavators with hydraulically activated hammers were used. The fill work at the ramp employed a John Deere 700K GPS controlled dozer.

"The road work is going along fairly well," said Goddard. "We're starting with the reconstruction of the sidewalks and the curb and that will continue throughout the current constructions season."

This element of the project includes minor road and intersection reconfigurations and lane shifting, adding lane and installing new signal equipment. The new lanes are based on a 12 in. of subbase material and 10 in. topping of asphalt.

Crews are working on one lane at a time to allow for traffic to keep flowing throughout the reconstruction.

The drainage improvements are adding more than 60 structures and increasing the size of some discharge pipes from 18 to 24 in., as well as installing a new 30-in. outlet drainage pipe.

"We're ensuring that the drainage system works a lot better," said Goddard. "Prior to this, it was choked off and had high-value limitations — it could not handle the amount of flow required at some points." 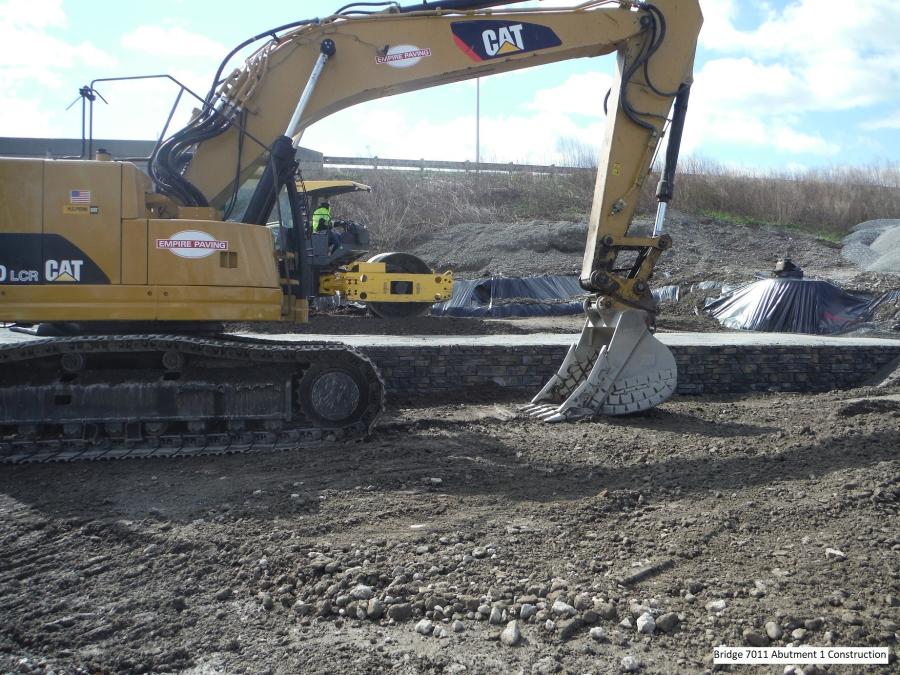 "We have an excellent working relationship among the various teams and crews," said Herbert, "and all parties share a common goal of completing the project on time, safely, and within budget."

"It's well integrated, and the crews are very hard working and pulling toward getting the job done," said Goddard.

Peak days have 30-plus Empire Paving and subcontractor workers on site, with the main subcontractors being: Bay Crane Service of Connecticut for bridge work; Davis Tree and Logging for clearing and grubbing; Mystic Air Quality for air monitoring and testing; Star construction for curb and sidewalk; Quaker Corporation for guardrail and noise barrier wall installation; Rizzo Electric for illumination and traffic signal construction; All Seasons Landscaping for plantings; and Garrity Asphalt for milling and safety markings for line striping

"We're not recycling anything on site due real estate restrictions — the site is just too small," said Goddard. "We're sending everything off to a recycling yard in Milford and then bringing it back from there. The materials that we excavate are removed from the site the same day.

"Hydraulic lines are a constant battle for us, but they are usually quickly resolved," said Goddard. "We have an in-house service department that does most of our repairs, but they are supported by the dealers that supply parts on a timely basis."