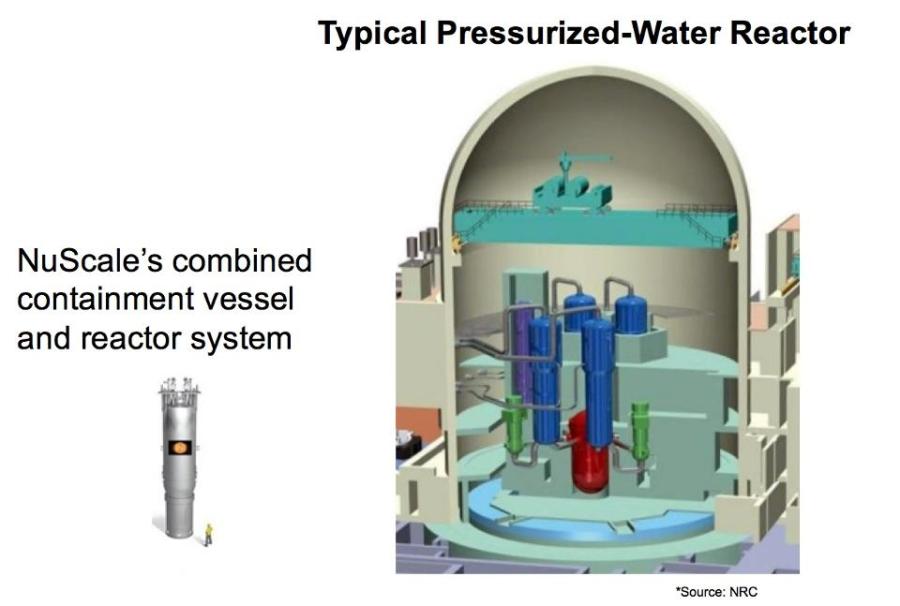 NuScale Power is a company with a mission – to build the first small modular nuclear reactor in America. As of now, they are certainly on track. In January, NuScale submitted the first design certification application for any SMR in the United States to the Nuclear Regulatory Commission.

This week, a mere two months later, NRC has accepted their design certification application - light speed for our nuclear bureaucracy. By accepting the DCA for review, the NRC staff confirms that NuScale's submission addresses all of the NRC requirements and contains sufficient technical information to conduct a full review.

It seems NuScale has all its ducks in a row, absolutely critical for as fast a review and licensing as possible. Those ducks included about 12,000 pages of technical information from over 800 NuScale staff and about 40,000 NRC staff-hours in pre-application discussions and interactions.

Even so, the review will take most of 40 months, after which NRC will issue a design certification that will be valid for 15 years for NuScale to construct this new type of power plant.

The first commercial NuScale power plant is planned for construction on the site of the Idaho National Laboratory for the Utah Associated Municipal Power Systems (UAMPS) and operated by experienced nuclear operator Energy Northwest.

This is no small goal. Conservative estimates predict between 55 and 75 GW of electricity will come from operating SMRs around the world by 2035, the equivalent of more than 1,000 NuScale Power Modules. And America should lead that effort.

NuScale has their work cut out for them. NRC has never licensed an SMR, and conventional wisdom says the licensing period will be longer than usual. So NuScale spent a lot of time doing everything necessary to give NRC everything they needed to make it easy to license this reactor. NuScale spent $30 million dollars in testing, built large-scale test facilities and a unique control room multi-reactor simulator on the Campus of OSU.

This nuclear reactor is something that we've never seen before – a small modular reactor that is economic, factory built and shippable, flexible enough to desalinate seawater, refine oil, load-follow wind, produce hydrogen, modular to make the power plant any size, and that provides something we've all been waiting for – a reactor that cannot meltdown.

This last point is the really big deal with SMRs. The small size of each module changes the surface-area-to-volume ratio such that heat can be siphoned off easily so that the reactor can't melt down (see figure).

NuScale will build the SMR, UAMPS will own the SMR, Energy Northwest will operate the SMR and DOE will provide the site for the SMR on the grounds of its Idaho National Laboratory. UAMPS, an agency of the state of Utah, develops and operates power generation facilities to supply wholesale electricity to community-owned municipal power providers in Utah, Arizona, California, Idaho, Nevada, New Mexico, Oregon and Wyoming.

NuScale's small power modules are about 50 MW each and 12 of them can be put together to make a power plant up to 600 MW - a 12-pack. They use standard 17x17 PWR fuel assemblies, but only at half the height, with an average U235 enrichment of 3.8%. A single NuScale nuclear power module is 76-feet tall and 15-feet in diameter, and sits in a plant covering 32 acres or 0.05 square miles.

Refueling of SMRs do not require the nuclear plant to shut down. The small size and large surface area-to-volume ratio of NuScale's reactor core, that sits below ground in a super seismic-resistant heat sink, allows natural processes to cool it indefinitely in the case of complete power blackout, with no humans needed to intervene, no AC or DC power, no pumps, and no additional water for cooling.

The components of the NuScale reactor can all be manufactured in a factory prior to shipping and assembly at the site, removing a major cost issue with building new nuclear plants. The reactor vessels and other large components can be manufactured with medium-sized forges, something we actually have here in the United States. Traditional large reactors need extremely large forging facilities, of which only a few exist in the world - none in America.

These innovative designs bring the total life-cycle cost to produce electricity with this SMR to below that of any other energy source except hydroelectric.