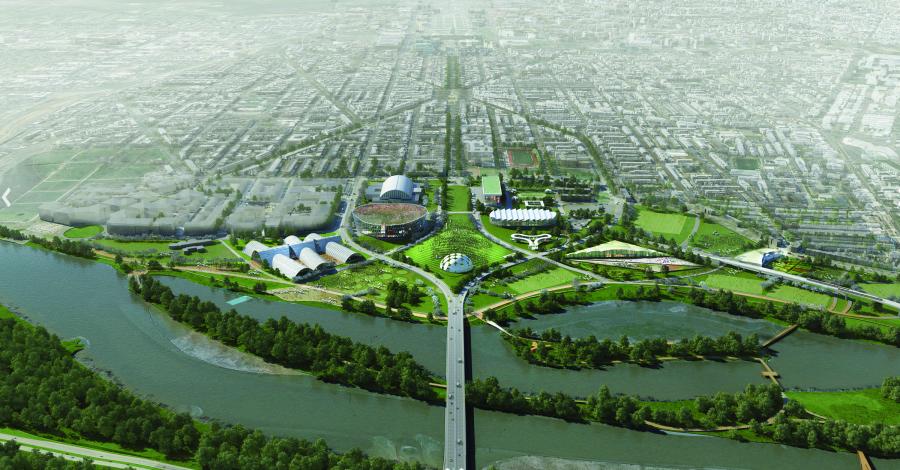 Events DC, the official convention and sports authority for the District of Columbia, proposed short-term redevelopment options for the 190-acre RFK Stadium-Armory Campus. The recommended elements come from community, stakeholder and city official feedback and will create a holistic path for the long-term vision of the greater site.

Alongside Events DC, the DC-based project management team, Brailsford & Dunlavey and the design team at OMA New York, took the feedback received to update the proposal for the campus, with a particular focus on the short-term elements that provide positive economic and community benefits.

“The RFK Stadium-Armory Campus short-term program elements that we have proposed will turn asphalt into active uses — from multi-purpose recreational fields to a permanent food hall that will serve not only the entire city, but importantly, some of the currently underserved areas near the campus.” said Max Brown, chairman of the Board of Directors for Events DC. “It remains our top priority at Events DC to restore and transform this iconic 190-acre campus into a prime example of innovative and flexible urban living that focuses on providing benefits for our residents, their families, and visitors alike. We look forward to making a formal announcement this spring once we receive the appropriate regulatory and government approvals.

After extensive feedback and design review following the initial long-term design concepts presented, Events DC has updated its proposal into a single, long-term vision which incorporates the strongest and most appreciated aspects of each of the previous concepts. The revised concept highlights the following assets: feasible infrastructure improvements, integrated and hidden parking, utilization of natural resources and activation of the waterfront corridor.

“In response to lots of community feedback, we are pleased to share short-term programs that immediately activate the RFK Campus in a manner consistent with the needs of the community and desires of residents and visitors alike. Our collaboration with DC residents, stakeholders and city officials are vital to the successful transformation of the RFK Stadium-Armory Campus,” said Gregory A. O'Dell, president and chief executive officer of Events DC. “We look forward to creating positive long-term economic impact citywide for Washington, DC and continuing this important dialogue with key stakeholders, government officials and the local community — as our active partners of this once-in-a-lifetime project.”

The short-term recommendations include five community-focused elements which can be designed and built over the next two to five years. These elements also remain consistent with the long-term vision and goals for creating a more holistic and vibrant destination with the District.

• three multi-purpose recreation and community playing fields available to the public and useable in the evening;

• a market hall conveniently located next to Kingman Park, which offers concessions, prepared food and groceries for both neighborhood residents and visitors to the site;

• sports and recreation complex, housing a variety of sport programs for families, youth and amateur sports to be developed with a partner and identified as a destination, in addition to a neighborhood amenity;

• three pedestrian bridges that will connect the main site to Kingman and Heritage Islands, each of which fits with ease and comfort into the surrounding site for better pedestrian flow and access;

• a memorial to Robert F. Kennedy, to be built as a replacement to the stadium, as it is planned to be demolished. This living monument will serve as a place to engage visitors and educate the next generation.

“We look forward to working with Events DC in reimagining this important space — named to memorialize my late husband — in a way that is befitting of his legacy. Through this memorial, it is my hope, that together we can help capture his forever-burning spirit and commitment to service,” stated Ethel Kennedy, widow, Sen. Robert F. Kennedy.

“My late grandfather lived his life every day in the service of others. It is quite appropriate and a testament to his legacy that the space named after him in our nation's capital will be reimagined as a living monument for future generations to enjoy,” reflected Maeve Kennedy Townsend, granddaughter to Sen. Robert F. Kennedy.

All three anchor scenarios reflect a phased approach intended to support and complement the short-term programming elements that will immediately activate the site with uses that will serve and connect the greater DC community.

Jason Long, OMA New York's partner-in-charge, said, “The RFK Stadium Armory-Campus — currently under-utilized — is poised to be transformed into a vibrant place that connects DC to the Anacostia River. Working together with Events DC, we have formulated a plan that strategically locates new facilities that will draw people to and through the site, while refining the vision for larger redevelopments in the years ahead.”

In the updated long-term vision, new sports and recreational elements will activate the site substantially, allowing it to become a significant bridge to the at-large monumental axis which fully utilizes the natural condition of the campus and leverages the waterfront. The long-term vision emphasizes the addition of roads that will provide a cross-grain to the current arterial roads, to make the entirety of the site, program elements and parking more accessible and traversable. In addition, based on community feedback received, the amount of green space will be increased by 240 percent to make the site more sustainable for years to come.

Specific partners will be identified and announced as plans for the campus continue to progress. This project falls directly within Events DC's mission to drive entertainment, sports and tourism in the District — as well as economic and community benefits. As a next step, Events DC will continue to maintain an open dialogue with the community and will look to receive the appropriate approvals from necessary government and regulatory agencies in an effort to move forward with the proposed short-term elements for the campus.