Excavating for Science in Former Gold Mine 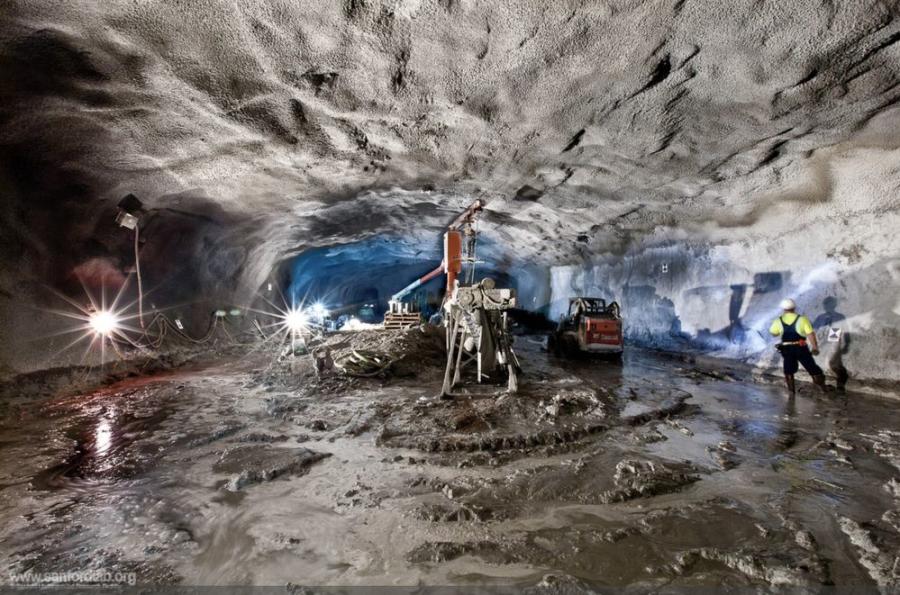 This cavern was built to house an experiment at the Sanford Underground Research Facility. It is seen here just after shotcrete was sprayed on the walls for ground support. (Matthew Kapust Photo)

For well over 100 years, the Homestake mine in South Dakota was the largest and deepest gold mine in North America, producing 41 million oz. of the precious metal until its closure in 2002.

Now, the extensive maze of caverns at the site, in the state's beautiful Black Hills, is being transformed into a laboratory designed to unlock the mysteries of some of the smallest particles in the universe.

The Long-Baseline Neutrino Facility (LBNF), sponsored by the U.S. Department of Energy's Fermi National Accelerator Laboratory (Fermilab), is based in the suburbs of Chicago. The South Dakota facility will be one end of an intricate physics research study called the Deep Underground Neutrino Experiment (DUNE).

The goal of the project is to build two large detectors that will snare elusive subatomic particles known as neutrinos, which were created and dispersed during the Big Bang. 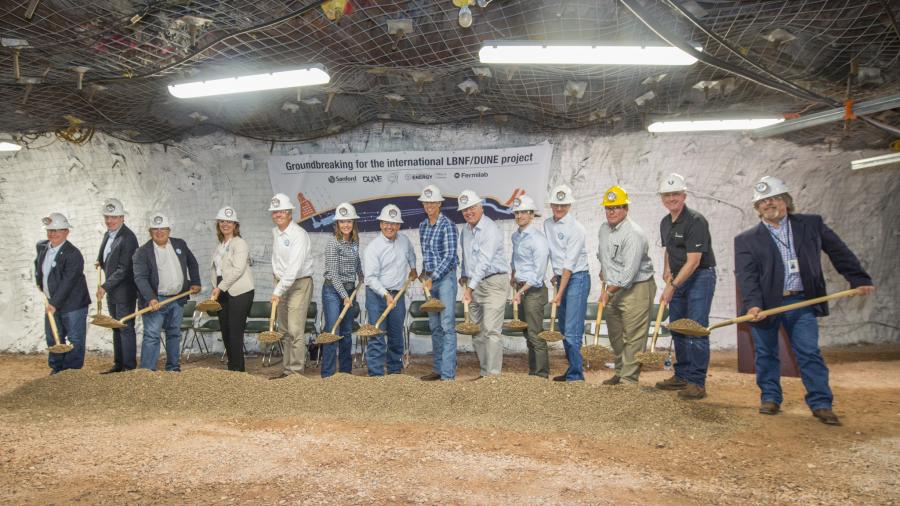 "Neutrinos are the ghosts of the subatomic world and very hard to detect," Don Lincoln, a physicist at Fermilab, explained in a YouTube video explaining the experiment's goals. "Neutrinos can pass through the entire planet with only a tiny probability of interacting. It happens all the time with neutrinos produced by the sun."

LBNF/DUNE will be constructed a mile beneath the earth's surface at the existing Sanford Underground Research Facility, which has long conducted science experiments at the old Homestake mine in the town of Lead, S.D.

The DOE has contracted with Kiewit-Alberici Joint Venture (KAJV) to perform the massive task of building the underground lab. The two veteran contracting firms are currently working on the pre-excavation phase of the project.

Over the next seven years or so, KAJV's engineers and contractors will dig and blast a massive amount of rock before moving to the surface and conveying it to a nearby open pit. They will then fortify three large caverns, making them safe for underground workers and leaving room for the assembly of the vast number of components needed to build the detectors and their accompanying apparatuses.

Two of the three caverns at the site will each house a large tank, or cryostat, measuring 60 by 65 by 220 ft. tall. Each cryostat, in turn, will contain a neutrino detector designed to collect beams of particles generated and aimed at them by an upgraded accelerator complex at Fermilab in Illinois, more than 800 mi. away.

In less than the blink of an eye, neutrinos will zip along the intense beamline in three milliseconds — virtually the speed of light, and an optimal time and distance for observing their oscillations, a key part of the experiment.

The data collected from the detectors will immediately be shared via the Internet with collaborating scientific universities and labs — more than 1,100 scientists from 178 institutions in 32 countries around the globe.

The thousands of parts and components needed to build LBNF/DUNE will come from many of those participating countries, although the DOE will fund the facility's construction. Because final designs are still being worked out, Chris Mossey, an engineer and Fermilab's project manager and deputy director for LBNF/DUNE, said it's a safe bet that the total expense will be well over $1 billion. That price tag will eventually include the construction of a smaller detector complex at Fermilab, which is still on the drawing board.

The work of preconstruction has been going on at the Black Hills work site for the past 18 months and will continue to the end of 2020, when the main excavation should begin. 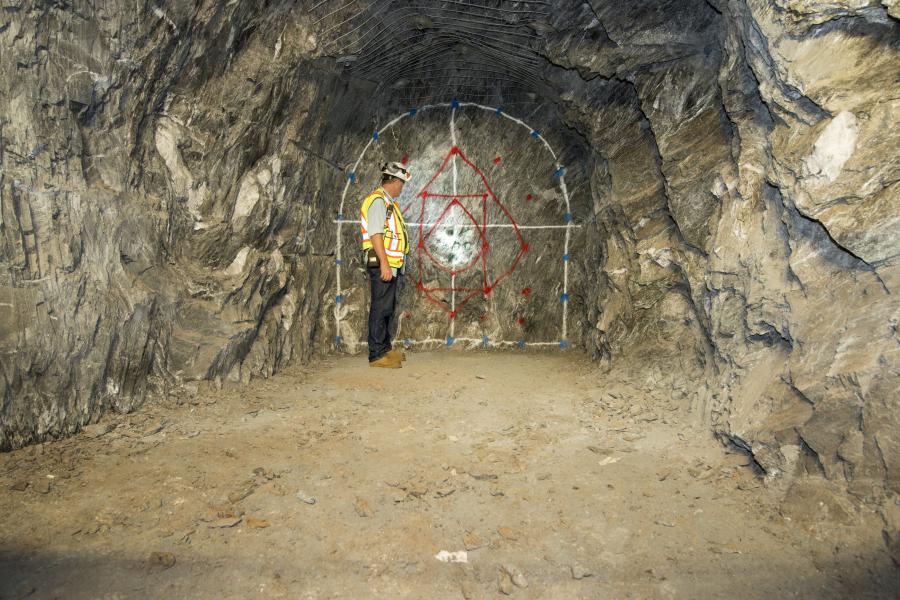 A technician inspects a test blast area a mile underground for the excavation of the LBNF/DUNE caverns at Sanford Lab. (Fermilab photo)

"Those activities will get the existing facility at Sanford Lab ready to move the 750,000 tons of rock that we are going to excavate to create the new experiment space," said Doug Pelletier, the conventional facilities project manager and lead engineer at LBNF/DUNE. "They will also get a lot of the old infrastructure modernized and make the historic rock conveyance systems from the old mine operational again."

For instance, the cage and hoists that the contractors will rely on to transport people and equipment up and down the two shafts to the work area, as well as to bring rock up and out, are all being completely rehabbed. Even the shafts themselves will be upgraded to move loads much more quickly and safely.

"These large skips, or buckets, that run up and down the shafts can bring about 11 tons of rock to the surface in just a couple minutes to crush and then convey across 4,000 feet of existing pathways to Homestake's massive, 1,000-foot-deep open cut," Pelletier said. "The amount of rock we put in the hole will only be about 1 or 2 percent of the open cut's volume."

KAJV will perform all the excavation, which will entail three full years of drilling, blasting and hauling rock to the surface, as well as another year of outfitting the site. Only then will the LBNF/DUNE experimenters begin installing the detectors.

If all goes as planned, the first DUNE detector should be operational in 2026.

More than 370 mi. of underground caverns and drifts (or passageways) make up the old Homestake mine. They range in depth from just a couple hundred feet below the surface to as much as 8,000 ft.

LBNF/DUNE, as well as other underground experiments at Sanford Lab, will be located at the 4,850-ft. level. 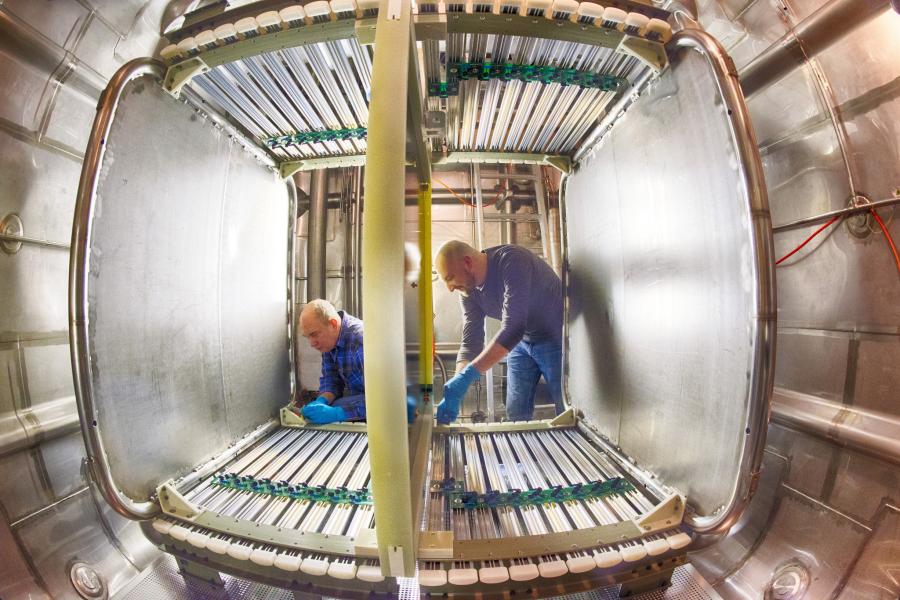 "Once excavation gets ramped up, the contractors will create caverns that are between 500 to 600 feet long, up to 95 feet tall and about 65 feet wide, each with an arched ceiling," Mossey said. "Inside those caverns we will assemble six-story-tall cryostats, which are big steel, rectangular tanks. Within each cryostat is a stainless-steel liner that will be filled with liquid argon, and nested inside of that is the actual neutrino detector."

Each cryostat is made up of 6 million lbs. of structural steel, Pelletier said, and its components will one day arrive in about 4,000 crates per cryostat, with another 300 to 400 crates per detector. The shaft that will carry these materials from the surface down to the construction site is only 15 ft. by 20 ft. wide.

"There are thousands and thousands of pieces to move and assemble underground," Mossey said. "Some people use the analogy that it will be like building a ship in a bottle."

Mix of Standard and Specialized Machines

To build the 0.75-mile-long conveyor system, a mix of excavators, front-end loaders and cranes will see action at the LBNF/DUNE site. The conveyor will have a steel frame with idlers, a continuous rubber belt and a traditional trough shape, such as those found at any quarry.

"All the rock is going to be removed by KAJV using a drill jumbo, an apparatus on rubber tires that can drill two to four different holes at once," Pelletier explained. "They drill them up to 15 to 20 feet in length and do so in a big pattern based on a preferred blast design. The holes can then be charged with timed explosives."

The drill jumbos are just one of an array of specialized, fully automated machines that will be on hand to blast and haul, as well as reinforce the chambers and passageways. Others include loader hauler dumps (LHDs), which look like most front-end loaders but have a low clearance for performing mining work; ammonium nitrate and fuel oil (ANFO) loaders, which fill the holes with explosives emulsion; and robotic shotcrete and bolting machines, the latter of which will drill the rods that reinforce the rock against collapse.

The bolting jumbos will drill about 20 feet down, then back out the drill steel, fill it with resin and spin the new bolt into the hole.

Among the companies that manufacture these unique machines are Atlas Copco/Epiroc, Sandvik and Caterpillar.

According to Pelletier, the Black Hills are ideal for a neutrino detector system because they are seismically stable, the rock is very hard and structurally sound, and there is little underground water.

"It turns out that a lot of cutting-edge physics, when you are looking for hard-to-detect particles, require a very quiet place where you are shielded from things such as cosmic rays or other types of particles that can radiate from different materials," Mossey added. "A lot of physics experiments today are done in deep underground places like the old Homestake mine."