As spectators watched curiously from the street and a nearby parking garage, specialty crews in Wisconsin methodically moved a roughly 600-ton, seven-story wall as part of an ongoing restoration of the Warner Grand Theater. Next fall, the Milwaukee Symphony Orchestra (MSO) will relocate to the Art Deco movie palace — a space that's proven extremely challenging for construction teams.

"Anytime you work on an old building or structure, you never can be certain of its as-built condition," said Tyler Finkle, International Chimney Corporation project manager. "During each project, the building reveals its secrets, which you have to adapt to one by one, as you deal with weather and site conditions that can vary. Wind was the main concern here, which is why our engineering department made sure to design a bracing system capable of high winds." 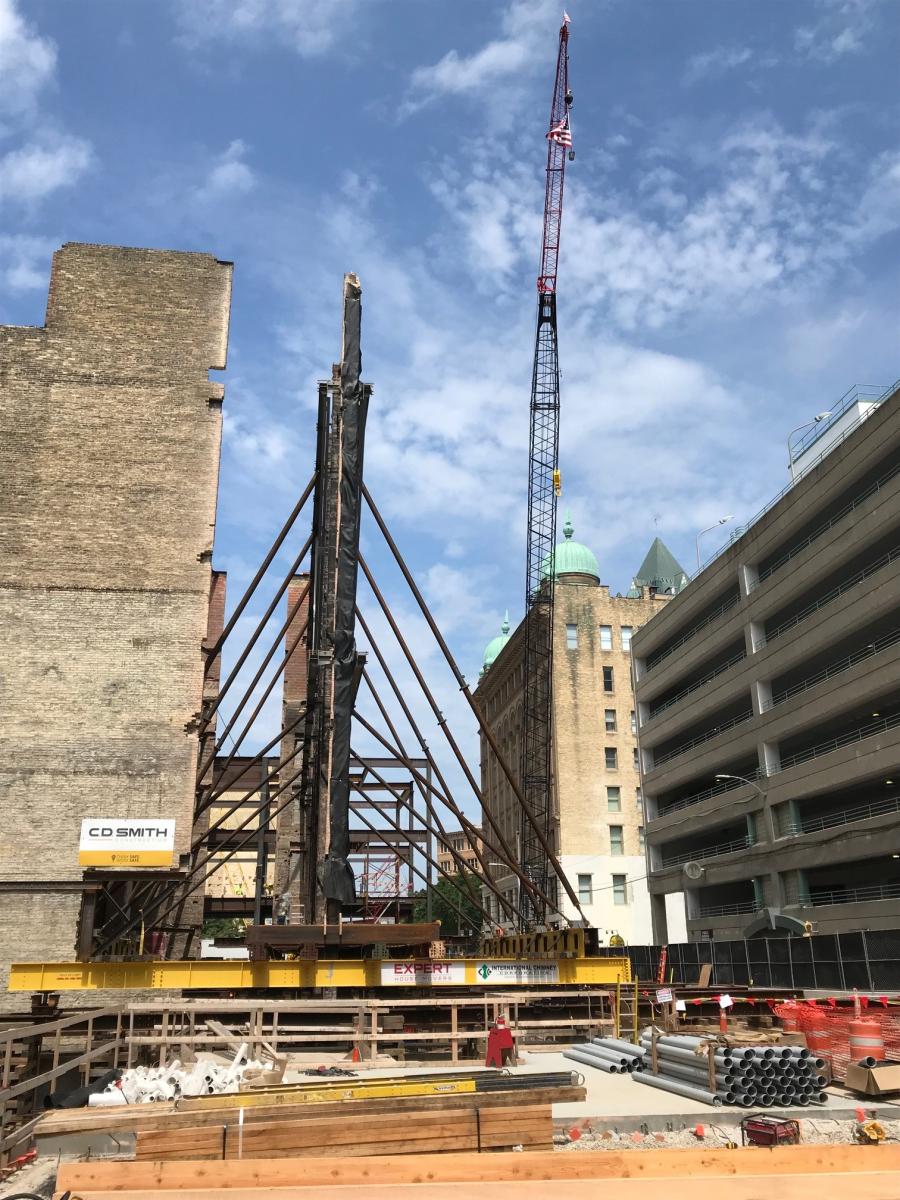 In a production as engaging as any performance ever featured inside the former vaudeville venue, workers from International Chimney, Expert House Movers and C.D. Smith Construction took their places as the six-hour move got under way. Two cranes were on hand to assist in moving the 120 x 80-ft. terra cotta and brick veneer wall.

"The cranes elevated workers to access the bracing and enabled them to cut free the wall's skeletal steel. They also lifted and assembled steel from flatbed trucks into place beneath the wall. Typically, a large loader would be utilized. In this case, the site was such that space was limited."

The dramatic undertaking was necessary because the stage at the Warner was not large enough to hold a full orchestra, and building it into the theater would have hampered sightlines and resulted in lost seats. Finkle said numerous steps had to be taken before the wall could be moved 35 ft. to its final destination.

"Selective demolition of the balconettes and parapet that were in need of a complete rebuild/restoration took place. The stage was protected from the elements with a temporary wall. The roof was removed. Terra cotta and brick on the veneer were carefully labeled piece by piece and salvaged for reinstallation. Mortar was analyzed for a custom match. Wind bracing was installed. Weld testing was performed on the existing 1930s steel. The weight of the wall components was quantified and the center of gravity determined."

Even the street behind the building had to be thoroughly investigated.

"There is a subterranean steam tunnel running parallel to the east façade," said Finkle. "It was important that minimal differential settlement would occur during the relocation." 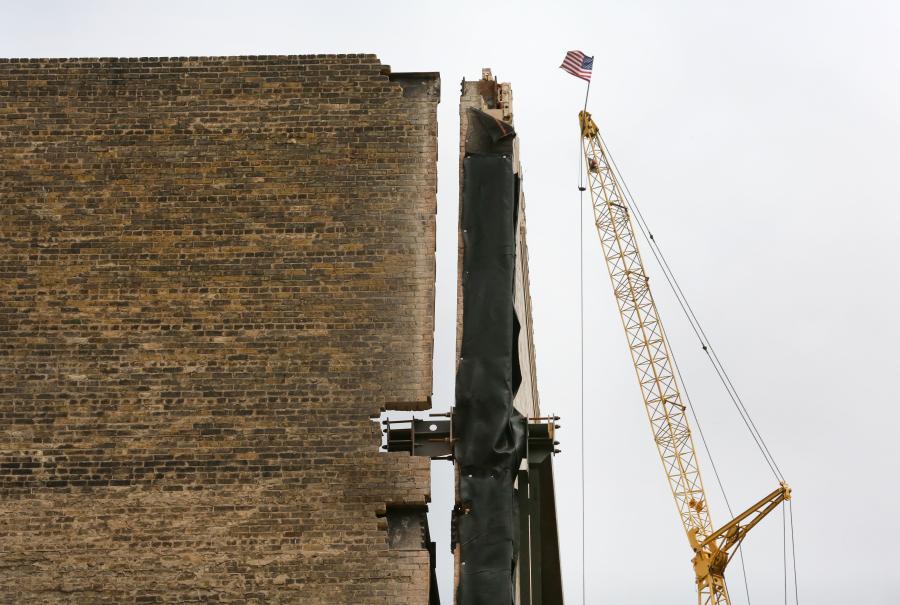 According to Gabriel Matyiko, vice president, Expert House Movers of Maryland Inc., one of the main concerns on the job was determining how to perform the work without using the standard equipment required for structural moving projects.

"Typically, we use skid steers, rubber tire loaders and tele-handlers to set steel and move our cribbing; however, on this project all our equipment had to be handled by cranes. Not only were we not able to operate our own equipment, but we also had to communicate with a trained crane signal man who then communicated with the crane operator, putting an extra layer between us and the job at hand. For this reason, our approach to placing steel and equipment completely changed. Adapting to that change, and still being productive and working within a schedule, was a big challenge."

"There were lots of rounds of questions regarding how the wall was built, move methods, the risk related to each one, issues with schedule, the projects surrounding the area of the wall to move, as well as the move path and what the soil conditions and underground steam tunnels would do to our move plan.

"After six months of back-and-forth meetings, drawings, plan changes etc., we finally got to a point where we had a plan concrete enough to be able to put a price on the job. Once the price was agreed upon and the contract was signed, then hard talks regarding scheduling began." 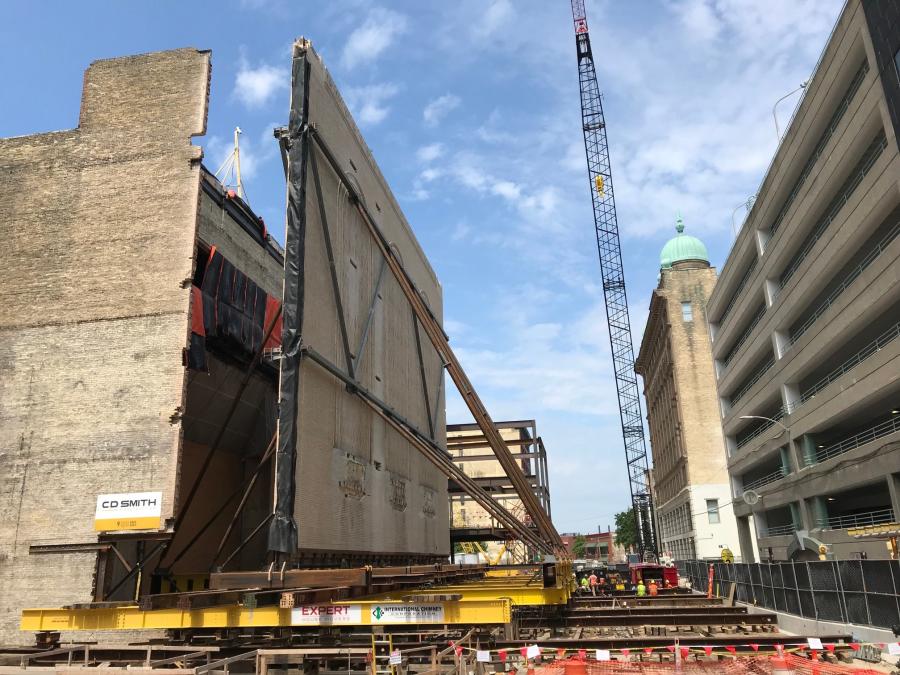 "The track beams that were laid down to roll on needed to be placed in exactly the correct way. Our margin for error for the final spotting of the wall above the new foundations was very small. The wall is confined to traveling along the track that was laid out in the months leading up to the move. If the track wasn't straight or was off one way or another, the wall would not hit its mark, and we would have very little in the way of being able to easily correct that, once on the spot."

Matyiko said understanding the condition of the earth under the street, as well as the duct banks and steam tunnels, was essential, because the entire area had to support the weight of the wall as it rolled off its original foundations and onto the new surface.

"All the space in-between had to be prepped to be able to adequately support the load along the track beams. Soil borings were made to know the condition of the ground. Bad soil was removed and gravel backfilled. Crane mats were laid down everywhere to disperse the load of the wall.

"Our tolerance for settlement of the base under our roll beams was three inches. The hydraulic jacks mounted to our Hilman rollers would be able to compensate for that amount of settlement, and still maintain no added stress to the load frame supporting the wall. 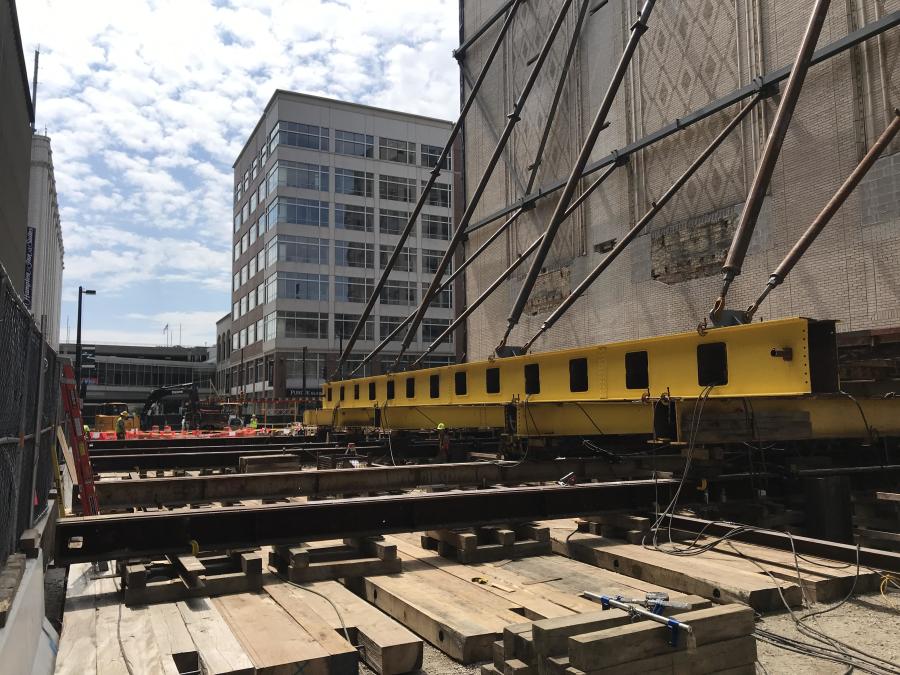 Matyiko explained that one of the biggest concerns regarding the project was the high center of gravity of the wall, coupled with the potential for large wind loads and the limited amount of space crews had to mitigate those issues on a tight job site.

"With some structures, if you were to miscalculate a load or fail to support a portion of the building correctly, there's the potential for some small amount of damage before you realize the issue and then correct the problem. However unfortunate the issue, it's one that doesn't normally cause a catastrophic failure to the structure.

"Because of the high center of gravity and the issue of high amounts of possible wind loading, if those same missteps were to happen, a catastrophic failure of the wall would be a high probability. For this reason, the margin of error on the support and load frame design, as well as the execution of that design, was very small. Every part of the scope of work was well thought out, and took into consideration the rest of the work that was happening to ensure that the risk to the wall was minimized at all times."

Matyiko added that the project was truly a team effort.

"C.D. Smith, their engineers, International Chimney and our team at Expert House Movers came together with the common goal of completing the move in a safe, efficient and expeditious manner. There was a great sense of accomplishment and relief that all went well, and everyone was satisfied with the outcome." 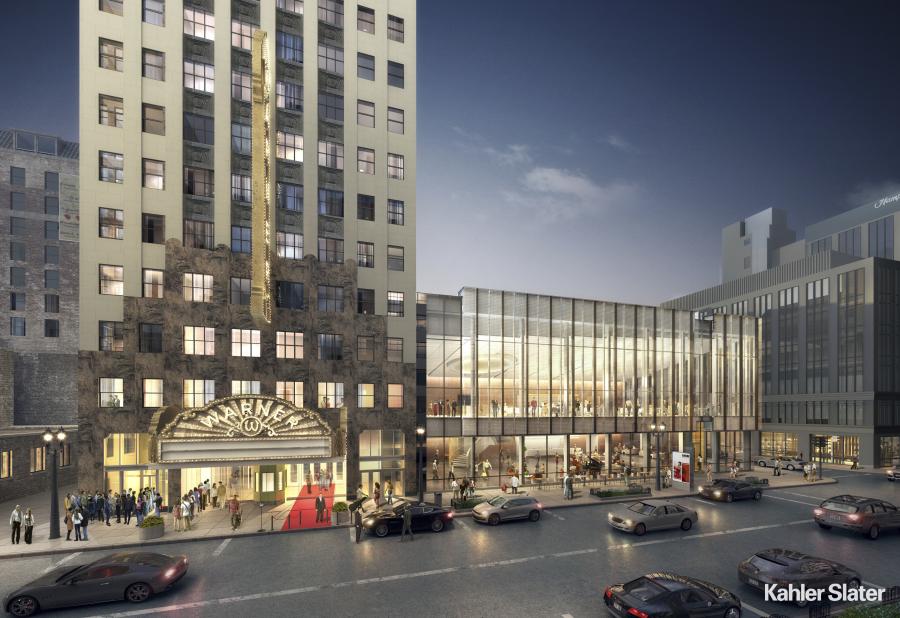 As part of the $90 million dollar project, MSO is overseeing the construction of an adjacent lobby and reception building. The lead architect on the project is Chris Ludwig, while Koby Scheel serves as project leader. Both are with the architecture firm Kahler Slater.

"The project vision was to protect the MSO for future decades by providing full schedule control and flexibility, to preserve a historic landmark theater and catalyze the renaissance of Westown/West Wisconsin Avenue," said Ludwig.

"The renovation needs to provide an outstanding performance space design for the MSO by accommodating varying performers and functions. With the ability to flex and adapt, the restored building will be an open and inviting space. Looking back, the original goal of the 1930 Grand Warner Theater was to create a facility that was for the common patron. The renovation had to carefully incorporate appropriate technology for the 21st-century Symphony Hall, which also includes building amenities that support the MSO and its users, while still respecting the building's history."

The wall move posed a challenge to the creative team, as it required a significant rework of existing infrastructure in the adjacent street, according to Scheel.

"It was the kingpin to many of the design decisions related to the theater expansion and adjacent additions. Finding the ‘sweet spot' for the final location was a delicate balance. The project needed enough space to function really well for the stage, back-of-house space and acoustic volume.

"On the flip side, the wall location also needed to maintain enough road and sidewalk to still work well as an artery in the city fabric," said Scheel. Once the location was identified, the collective design team could work back from that to find the best solution possible."

Ludwig said despite the changes planned, much of the aesthetics of the historic building and existing theater will remain intact. 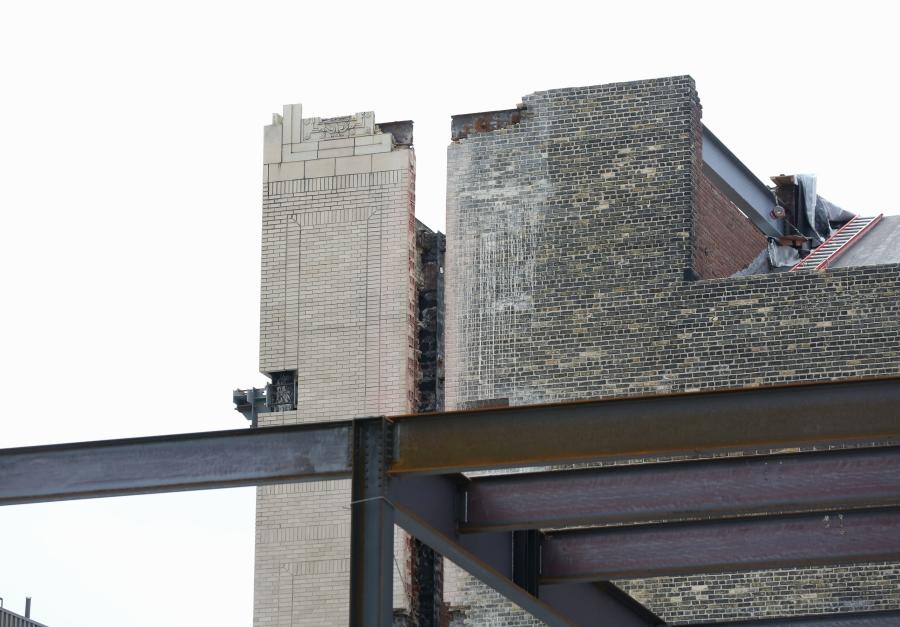 "There are professionals repairing plaster and cleaning/retouching the existing murals and exotic wood veneers, the historic lights are being repaired, cleaned and rewired and lamped by a specialist to provide energy efficient LEDs and the finishes will be warm and respectful to the historic character and yet meet the strategic guidelines as set by the acoustician."

MSO will open its new performance space in fall 2020, allowing it to move out of its current home at the Marcus Center of the Performing Arts. According to MSO director of communications Erin Kogler, the 2,400-seat theater, designed by the Chicago-based firm Rapp & Rapp, is an ideal choice.

"It's a beautiful, acoustically superior, historic venue that had been vacant for more than 30 years. It's the perfect solution for the MSO, and will be fully restored for half the cost of a new structure.

"The timing is financial. While the MSO has made great strides fiscally, the single largest factor essential to the MSO's long-term financial stability is gaining control over our performance space and calendar."

The renovation and restoration began in 2016. The work involves fully restoring the theater, building an addition to the east of the building, adding a backstage area and renovating the tower. The new addition will add much-needed space for events, additional bathrooms, elevators to the balcony level and backstage areas.

To make way for the new lobby and reception area, the MSO demolished an adjacent two-story restaurant space. Workers are continuing to make progress on the project, which is about more than providing a new home for the orchestra.

"The synergy created by linking the past, the present and the city will be a catalyst for changing the way the MSO does business and engages with the community," said Kogler. "Our patrons and the community as a whole will have a new way to be connected to the music, the artists and each other." CEG