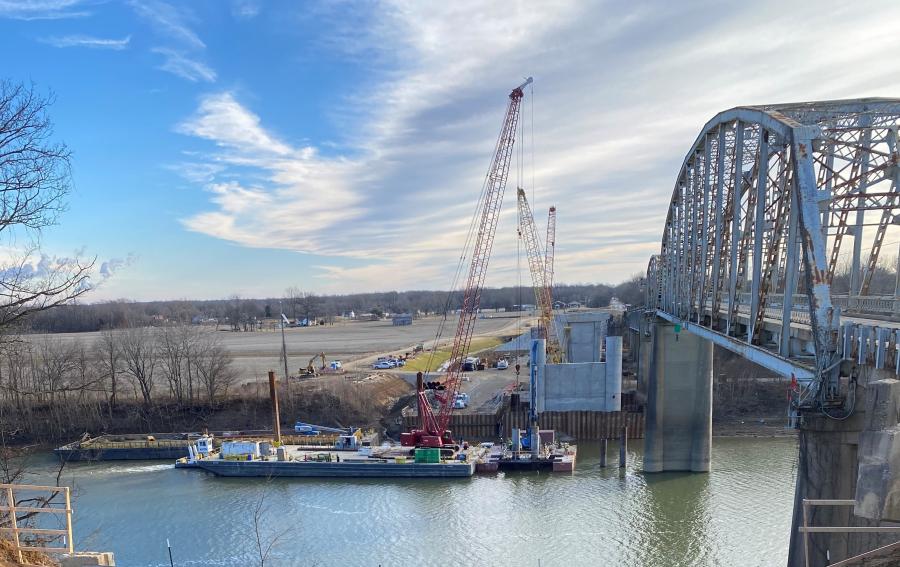 University of Kentucky sports fans will soon have colorful evidence of their team loyalty when a new bridge sprouts on the landscape sporting the team colors of blue and white.

Work began on the $32 million Spottsville Bridge, known officially as the Richard W. Owen Memorial Bridge, in Henderson County in January 2020. The color was chosen after a reader poll was conducted by Henderson County Judge Brad Schneider on his Facebook page. Local media outlets reported that blue was the "runaway color" with 1,000 Facebook followers weighing in. The color grass green came in a distant second with deep green taking third. 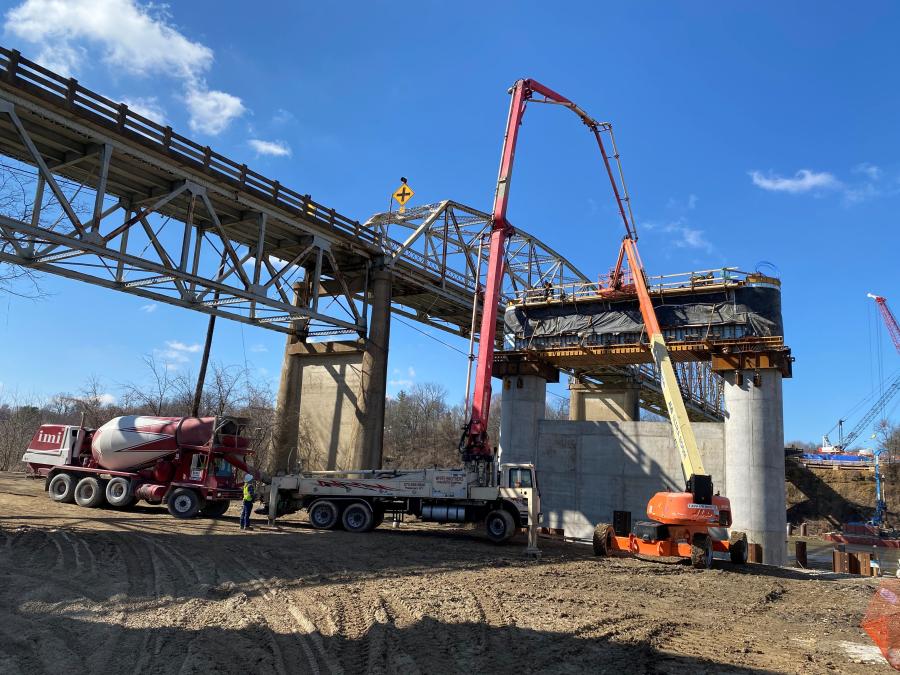 The project to replace the bridge, originally built in the 1930s, was necessary for numerous reasons, said Matt West, project manager of the Kentucky Transportation Cabinet (KTC).

"The current structure is narrow, two 9-foot lanes," West said. "We lowered the weight limit and with today's equipment, vehicle sizes, especially in this agricultural area with a lot of farm equipment traveling back and forth across the bridge, it's in need of some updated repairs. We have to stop traffic on both ends to get a piece of equipment across. There is some industrial traffic in the area that has to take significant routes around this area to get their products shipped."

"The new Spottsville Bridge will be constructed adjacent to and north of the old bridge," said Keirsten Jaggers, public information officer of the KTC. "It will have 12-ft. driving lanes and 8-ft. shoulders versus the existing 10-ft. driving lanes and narrow shoulder.The additional space will allow for some wiggle room; especially in regards to incident management," Jaggers said.

Along with COVID restrictions, the project comes with a few challenges, but the flood plain on the east end approach and the differing elevations from east to west pose some of the biggest hurdles. The east end is under water any time the river rises. When that happens, the contractor, CJ Mahan Construction Company LLC, must demobilize all the equipment and move all materials to higher ground. That happens multiple times a year, West said.

"They pull all their cranes — there are two cranes on that side — and they've got to move all their barges and river equipment. A lot of the equipment they can't move across the bridge so they have to make a 20-mi. trip to the other side to get the equipment and materials across the bridge. It takes some time. The contractor does bridge construction all over the United States and this is a typical thing with bridge construction. You work around the river." 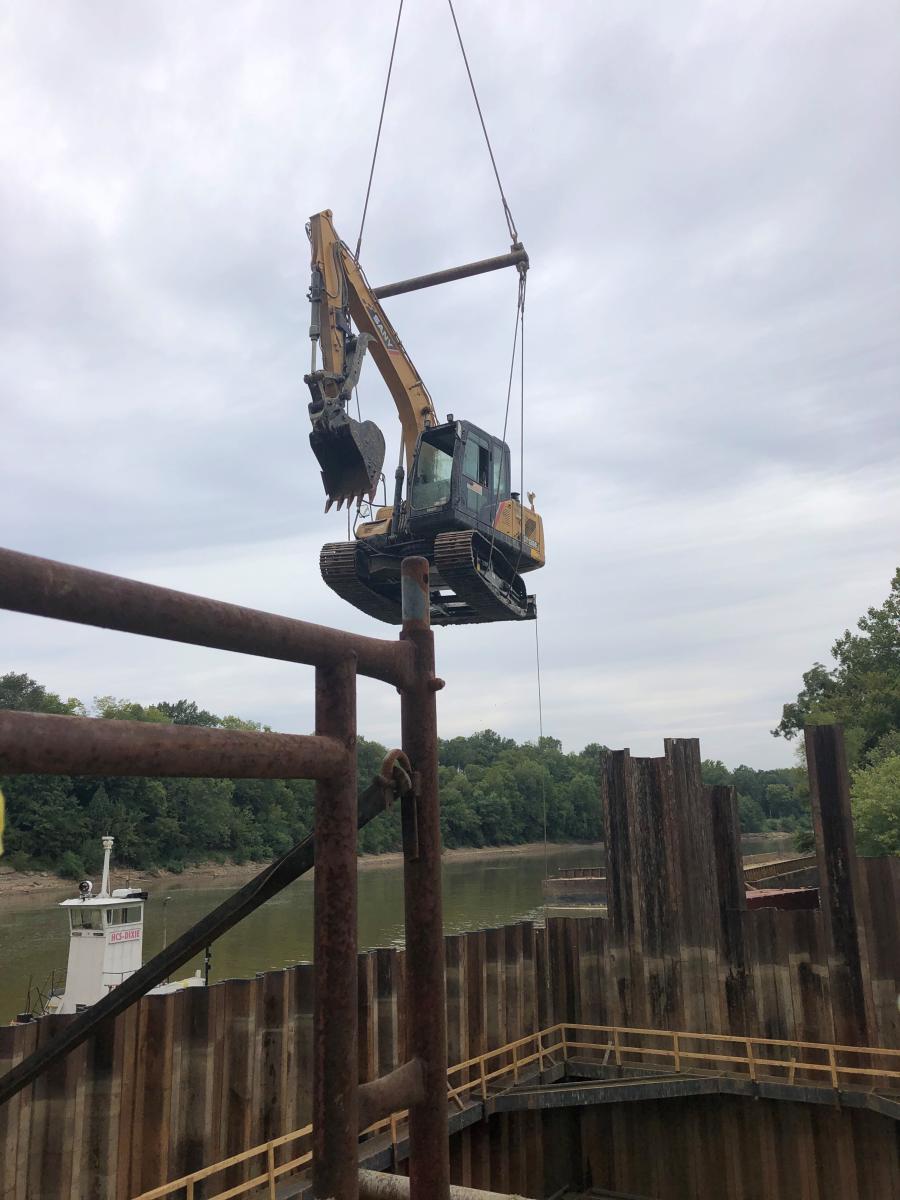 The elevation difference between the east and west approaches is about 75 ft. with the west side at 400 ft., and the east side, which sits on a pier, at 326 ft.

"The big challenge is all that ground on the east side is within the floodplain," West said. "You just have to be mindful when the river rises. It typically happens four to five times a year, but it's already happened three times this year already."

Another issue is an old coal mine just a few hundred yards upstream from the bridge.

"The mine shaft [abandoned] ran under the abutment," West said. "So, one of the first things we did was drill 100 feet below the surface and completely fill in that mine shaft with grout and cement so there wouldn't be any issues of collapse or settlement. This was known. This is a heavily-mined area with underground mines and surface mines. That's something we keep an eye on. During the planning stage, about 15 to 20 miles from this area, we had our parkway develop a large dip due to an old abandoned mine that collapsed and settled. The mines are so deep in a lot of these places. The dip was six to eight inches and was more than a few hundred feet long. It was long, very noticeable. We did some corrective measures to get the roadway back on grade."

Heavy equipment on site includes four cranes; a barge; a drill rig capable of drilling 8-ft. shafts; dozers; excavators; and articulating trucks. The equipment is a mix of both owned and leased.

"Mahan owns all of their cranes," West said. "A lot of the excavators and trucks are leased from United Rentals which has been one of the main rental companies."

The new bridge is expected to open in 2022 at which time the existing bridge will be demolished. CEG