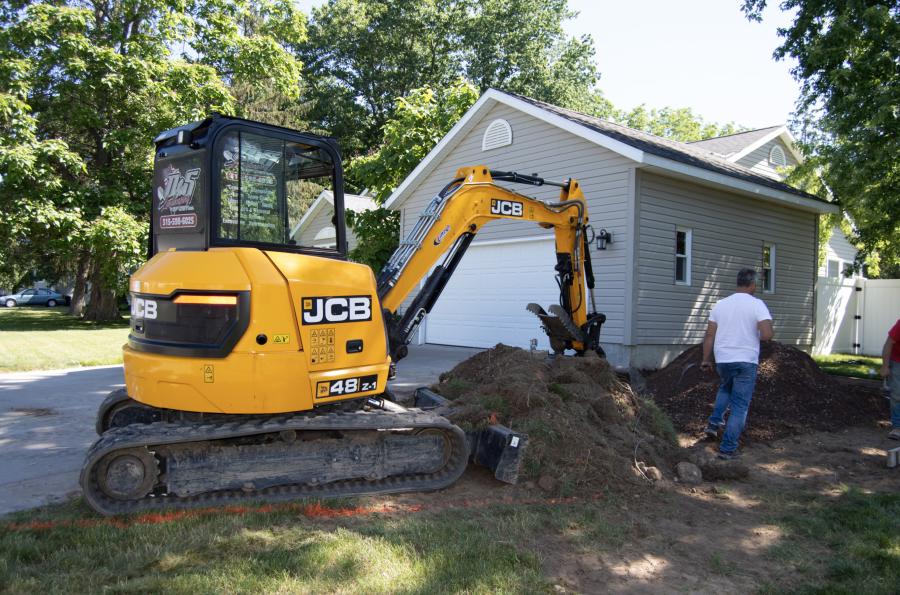 The latest addition to the D & S Landscaping of Central New York fleet: a JCB 48Z-1 equipped with an excavating bucket.

In 2005, Jason Simmons was just a few years into building his entrepreneurial dream, D&S Landscaping of CNY.

At this early state of his company's development, he was primarily focused on lawn care and property management. He also owned a tractor loader backhoe and regularly did septic repair and access work. 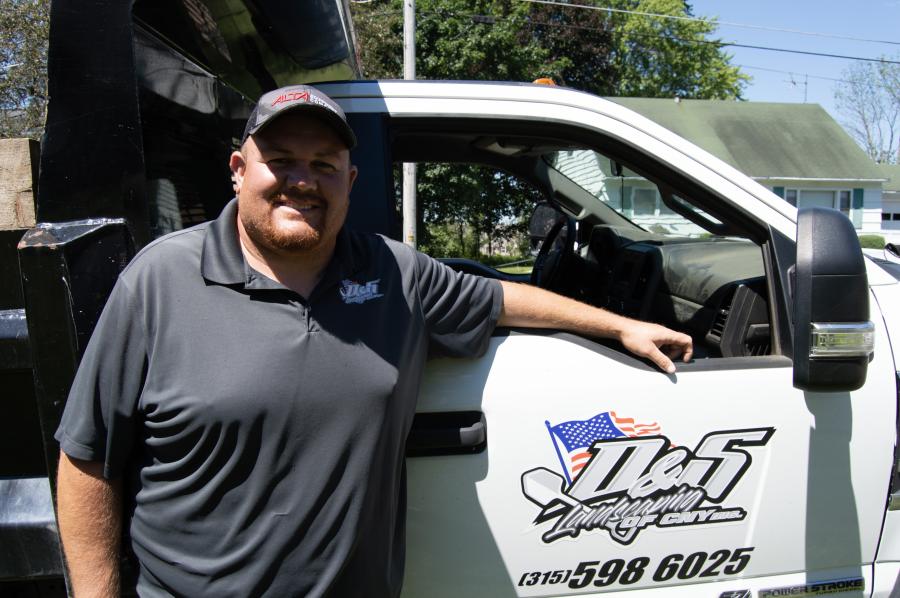 When he got a call from his father in Volusia County, Fla., letting him know that a recent round of hurricanes had created the need for a lot of storm cleanup and that the amount of work was just about endless, Simmons loaded up what he had and started subcontracting with a local contractor who was licensed to do storm cleanup work.

His father had not exaggerated — the amount of work was overwhelming and within a short period of time, Simmons purchased some used earthmoving equipment that he knew he could quickly get a return on investment from.

It wasn't long after Florida was cleaned up that Hurricane Katrina slammed the gulf coast, which opened another opportunity for Simmons to have another prolonged period of making good money doing hurricane cleanup, this time in the Louisiana/Alabama area. This led to him buying additional used construction equipment to add to his fleet.

Eventually, the string of hurricanes slamming the southeast came to a pause and Simmons returned to central New York State, along with his newly acquired fleet of well used iron. He put a couple of crews together and developed a good reputation in the Syracuse/central New York area for doing a wide variety of work, including landscape, hardscape, concrete work, property maintenance work, and of course, winter snow removal.

"I have always been a believer in doing as much maintenance and repair work on my own equipment as possible, so we have for some time had our own repair shop and try to stay as independent as possible," Simmons said.

As business grew and they were putting more and more hours on the used fleet that Simmons had acquired during the storm cleanup period, it was becoming less efficient to keep spending money on the older machines, and Simmons decided it was time to start investing in a new equipment fleet.

"I have always put a lot of credit in the advice of my dad, Kevin Simmons, and he loves equipment. Right away, he started pushing JCB. It was not a brand that I had seen a lot of, and I started doing my own research and visiting all of the various equipment dealers in the central New York area.

Simmons' first purchase was going to be a skid steer and the JCB skid steer was very different than anything else that was out there, he said. 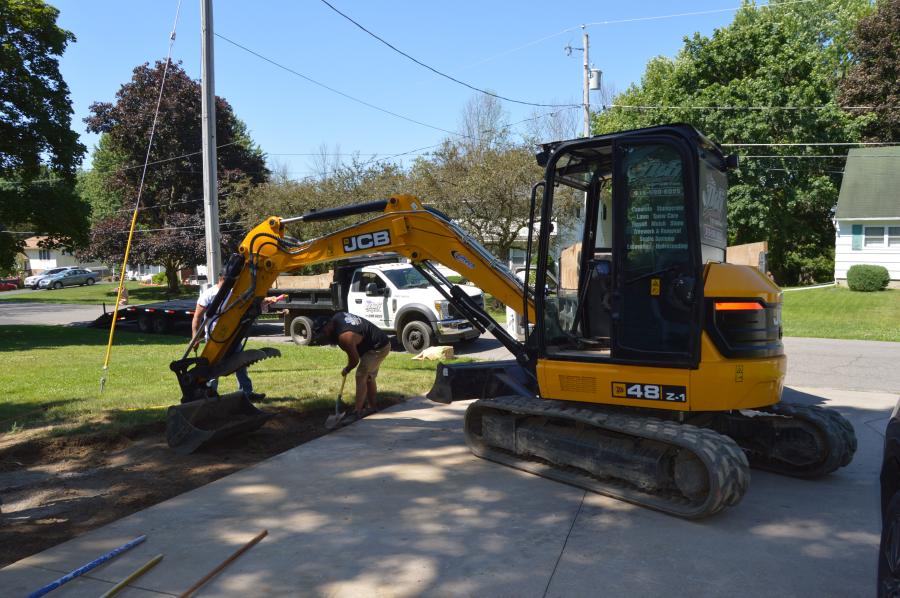 "The side door entry was very appealing. I'm not a small guy, and the idea of having an alternative to climbing in and out of the machine through a side door entrance versus climbing over a bucket was appealing to me. I liked the big windows, the machine offered great visibility, and once I made the purchase I was really impressed with the stability.

"Although, the single arm caused me some concern, I later learned that it was actually a tremendous advantage. I met with Alta Equipment Company's sales rep, Andy Shultz, on several different occasions and ultimately did decide to go with the JCB.

That particular year was an extraordinarily cold winter and every piece of equipment D&S had was put through grueling tests if they were involved in snow removal.

"If you're familiar with the Syracuse/Fulton, New York, area, it is the heart of the Tug Hill Plateau, where our snow accumulation is measured in feet. Due to the abusive conditions, I did have a couple of situations where we needed help from Alta Equipment Company and the response that we got each time I called Andy Shultz was amazing. They were at our machine almost immediately and got us back up and running faster than I thought possible. That paved the way for me to purchase essentially an entire fleet of JCB machines over the next few years, including a backhoe, two wheel loaders, two skid steers and three excavators, and every dime of it has been money well spent."

As the fleet grew, so did D&S's efficiencies, opening the door for it to get involved in more commercial work. The commercial work has allowed the company to work further into the winter and start projects earlier in the spring, thus allowing it to be less dependent on snow removal for its survival.

Simmons' operators really appreciate the new equipment and the technology.

"The excavators have three different operating modes. Some of my operators like mode 1, which is a very slow, deliberate mode. It's a speed that they are comfortable with. Other operators like mode 2, it's faster and more aggressive. I'm not sure I have anyone who uses mode 3, it's crazy fast.

"We have at least three buckets sized to each excavator with a pin-grab quick-attach system so that one machine on each site can do a wide variety of jobs. Our JCB 18Z-1 is a tiny 3,000-pound [3,856 lb.] excavator, which just has a 12-inch bucket, but it is ideal for working in very tight spots. A lot of the communities that we work in are older developments with tiny back yards. We use this machine along with a Toro Dingo, which we also bought from Alta Equipment, for a lot of these tight spaced projects."

Sometimes in life and business timing is everything. As Simmons has invested in his equipment inventory the demand for specialized landscape work in parts of central New York has increased. Higher end residential properties have increased, particularly around some of the lakeshore areas. Hardscape projects have become in high demand. Simmons and his crew have developed a reputation for having a high skill set for this type of work and the demand is so good that word of mouth is keeping his crew very busy and he has eliminated the need for advertising.

D&S's most recent purchase from Alta Equipment Company is a JCB 48Z-1 excavator, which is in the 10,000-lb. class. According to Simmons, this piece of equipment has become a critical tool for as the company progresses into some larger projects.

"We have equipped it with several different buckets including a grading bucket and a trenching bucket, which gives it a great deal of versatility. We use it for everything from building new driveways to installing drainage lines. It's an ideal size, easy to transport, not too big and not too small, and has plenty of power." 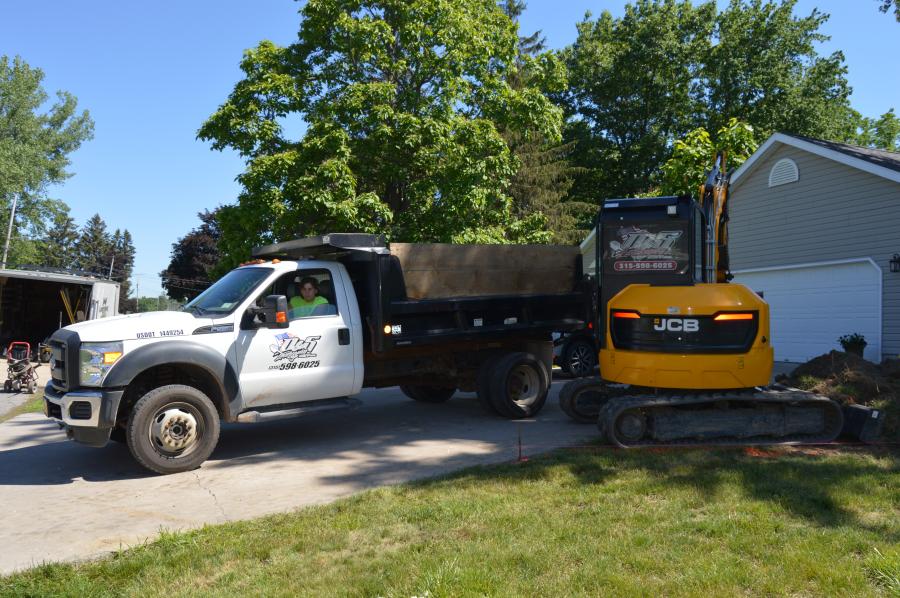 As the fleet has grown, D&S has continued to do most of its own service work, "but anytime an issue has developed where we need parts or any kind of support from Alta Equipment, Andy and the service team at Alta are right there for us. It certainly doesn't happen very often but when it does, we can really count on them."

The equipment investments that D&S have made have been key to helping its business grow, according to Simmons, cutting down a lot on labor and time on projects.

"The new technologies in the equipment quickly pay for themselves. I have been so impressed with the quality in the JCB machines and the ease of serviceability, which is a big deal when you do your own service like we do. These days we survive by word of mouth and we take pride in doing a job right the first time. That's the reason we stick with Alta Equipment and JCB. They treat us the same way that we treat our customers.