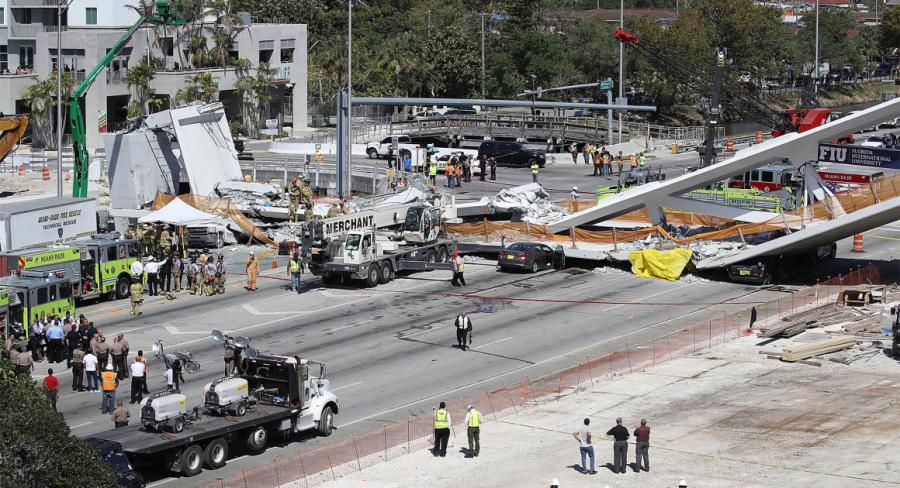 Although FDOT has said that the records in question are public, it will not release them on the grounds that federal law allows for such documents to remain private if they are part of a National Transportation Safety Board investigation, which overrides the state's law on public records, the Tampa Bay Times reported. (Photo Credit: Politico)

In court on June 4, the Florida DOT (FDOT) tried to block the public and media from seeing the records that could show the cause of the fatal FIU bridge collapse in March.

FDOT requested that Judge John Cooper of the Leon County Circuit Court dismiss a lawsuit by the Miami Herald, which urged the state of Florida to turn over documents including emails, meeting minutes and additional records detailing the bridge's construction and design, the Tampa Bay Times reported. The newspaper filed the lawsuit after two months' worth of attempts to get FDOT to release the documents.

Although FDOT has said that the records in question are public, it will not release them on the grounds that federal law allows for such documents to remain private if they are part of a National Transportation Safety Board investigation, which overrides the state's law on public records, the Tampa Bay Times reported.

But Judge Cooper had other ideas: He refused to dismiss the case during a hearing on June 4, and gave federal investigators two weeks to decide if they would like to defend themselves before making his ruling.

While Benjamin T. Allen, an attorney for the NTSB, said in a letter, that federal law shields any information “related to the accident or incident” if it was gathered by the agency as part of the investigation at hand, Sandy Bohrer of Holland and Knight, which represents the Miami Herald, disagreed. Bohrer instead said that the law in question only applies to documents that originated as a result of the investigation — not to documents that existed before the incident occurred, the Tampa Bay Times reported.

“Florida law is clear that if an agency's record is a public record at the time it is made or received, then that document does not lose its character as a public record if the document is later given to an investigative agency in the course of a subsequently initiated investigation,” said Bohrer.

Bohrer went on to ask that Judge Cooper disregard the NTSB's letter; the agency is not one of the active members of the case, was not at the hearing, and did not provide a citation for its interpretation of the law, the Tampa Bay Times reported.

But Judge Cooper said, “Seems to me this is purely an interpretation of a federal agency regulation,” before concluding that the NTSB was an “indispensable party” within the case.

Judge Cooper also rejected the argument by FDOT for the case's dismissal because the NTSB wasn't included. Instead, he ordered that the state agency to send the NTSB a letter requesting that it join in the lawsuit as a party, or otherwise file an amicus brief to defend its position. Judge Cooper then said that if the NTSB does not do either, the state will say that “we're going to continue the party without you,” the Tampa Bay Times reported.

After the trial, FDOT released a statement that said it “has released hundreds of pages of records relating to this case,” and that it had asked for an opinion from Florida Attorney General Pam Bondi about whether the agency must release the documents in question, the Tampa Bay Times reported.