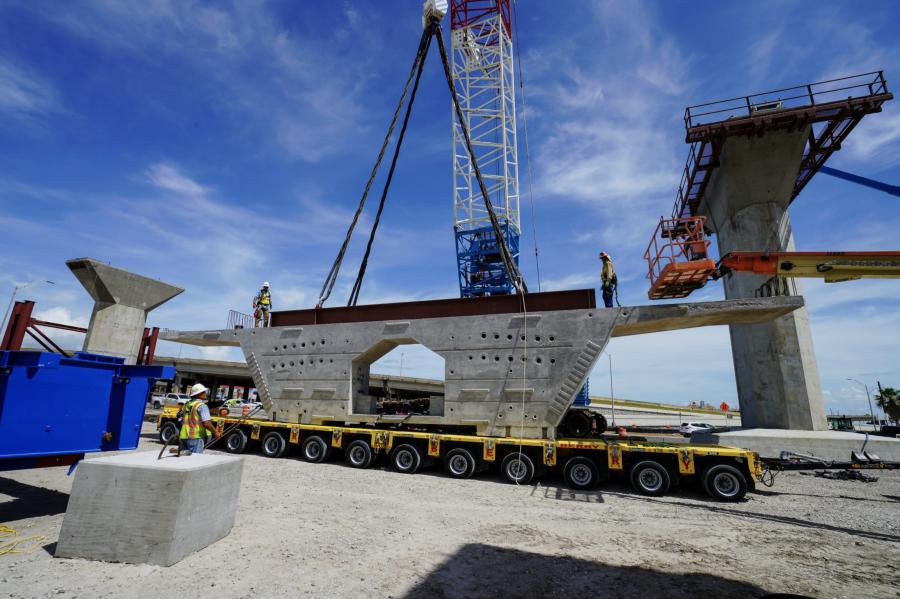 The segment weighs 135 tons and is the first of about 2,600. (Harbor Bridge Project photo)

On Sept. 4, the Corpus Christi Harbor Bridge project reached a major milestone when the first pre-cast segment was delivered to its North Approach. The segment weighs 135 tons and is the first of about 2,600. Each segment will be set on 50-ft. columns, according to Twitter posts from TxDOT and the Harbor Bridge Project.

According to the Harbor Bridge Project web site, upon completion, the Harbor Bridge will be “the tallest structure in South Texas.” It will be the longest cable stay bridge in the United States. The main span is 1,661 ft.; the main tower height is 538 ft.; and it will sit 205 ft. above Corpus Christi Bay.

The $802.9 million price tag includes development, design and construction of the new bridge; reconstruction of portions of U.S. 181, I-37 and the Crosstown Expressway; and demolition of the existing bridge. Work began with a groundbreaking ceremony in 2016 and the bridge is expected to be complete in 2020.

Lorette Williams, public information coordinator of Flatiron/Dragados LLC, design-build contractor of the project told CEG earlier in 2018, “The new bridge would have a positive economic impact on the area.”

In June, crews completed drilling 40 shafts — each 10 ft. in diameter — for the columns. Each shaft was 200 ft. deep and more than 500 cu. yds of concrete was used to fill each shaft. On both ends of the future bridge, crews are working on the foundation footings. Each footing is 132 ft. long and 72 ft. wide. It will take more than 6,336 cu. yds. of concrete (approximately 750 truckloads) to build the footings. Crews expect to pour the first concrete lift on the south side by the end of September, according to the project web site.

On the south side, pile driving for the foundations is under way while on the north side 14 footings, 31 column lifts and five pier caps have been cast as of early September.

Crews are close to completing the assembly of the launching gantry crane, which will be used to place the pre-cast segments.

Demolition of the old bridge will take place following the completion and reopening of the new Harbor Bridge. The new bridge allows TxDOT to improve safety and streamline the flow of goods throughout the area. It also provides economic opportunity for the Port of Corpus Christi.