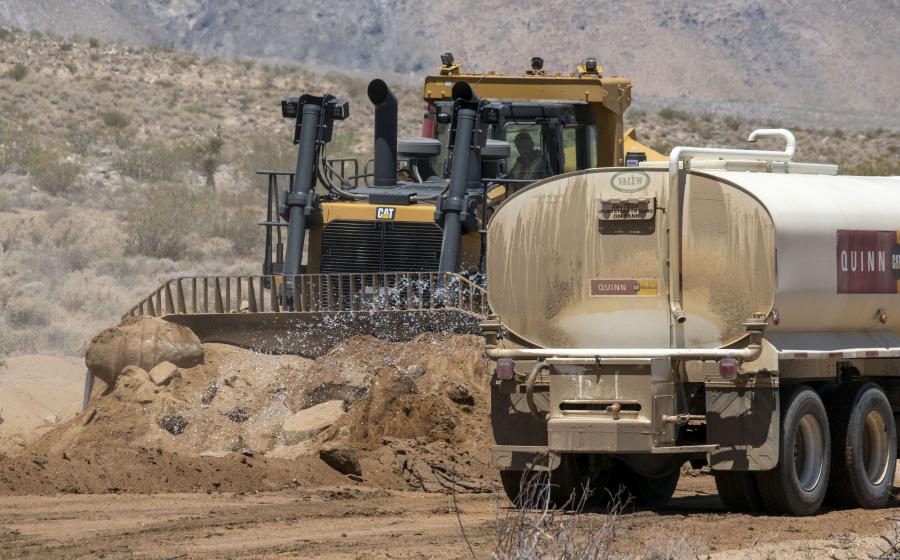 Fisher Sand & Gravel Co. (FSGC), along with the California Department of Transportation (Caltrans), is nearing the completion of 50 mi. of new lanes in southern Inyo County via its Olancha-Cartago 4-Lane Project, a $134.8 million investment. 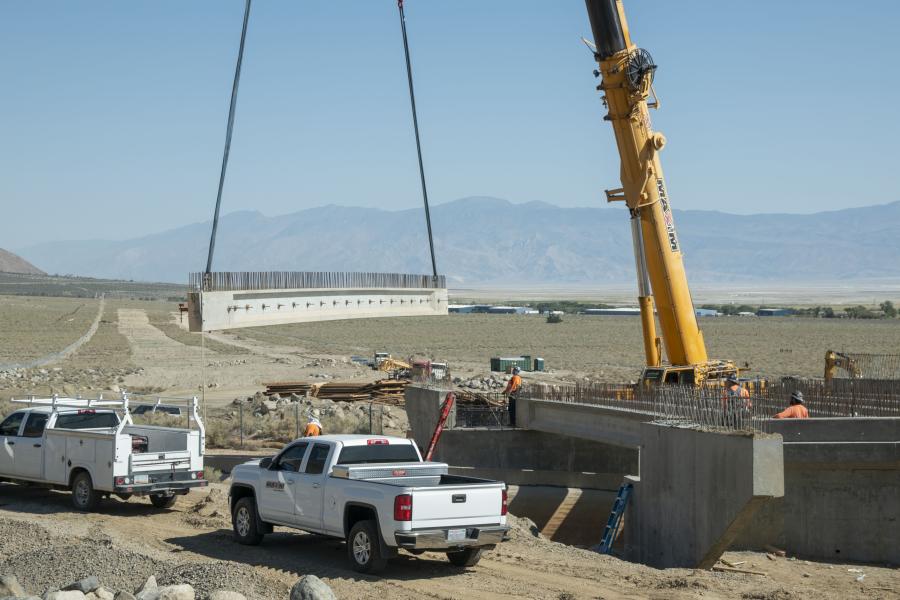 "The highway is vital to the economy of the Eastern Sierra region and is one of five major recreational corridors identified for Southern California," states the project web page.

Crews from Fisher Sand & Gravel Co. began construction on the last stretch (12.5-mi., postmile 29.2 to postmile 41.8) of U.S. Highway 395 last January, to update this section to two lanes in each direction with a 10-ft. shoulder on each side.

The overall project has been in development since 1998. FSGC submitted a winning bid of approximately $69.7 million and was awarded the contract on Aug. 31, 2021. The project's completion date is tentatively set for February 2024.

The work also includes the construction of new at-grade intersections and two new structures over the Los Angeles Aqueduct.

"The new roadway will make travel safer for drivers through the towns of Olancha and Cartago with a four-lane divided highway," said Michael Lingberg, public information officer of Caltrans District 9. "This stretch of U.S. Highway 395 is used by commercial and passenger vehicles, and no passing is allowed, especially through the towns of Olancha and Cartago. To the north and south of this project, U.S. Highway 395 is a four-lane divided highway."

The new lanes are west of Olancha and run through Cartago, on an alluvial fan at the base of the Sierra Nevada.

Construction, which is utilizing locally sourced materials, is progressing well based on Caltrans project updates. Crews placed rebar on the footing for the bridge abutments and wingwalls on the south side of the Los Angeles aqueduct back in July.

Crews utilized a Cat D10 bulldozer on the job. Standing almost 15-ft. tall and weighing more than 171,000 lbs., it is one of the primary machines used to clear the land for this project, alongside the smaller Cat D6 bulldozer. It is equipped with a 11.5-ft. wide blade in front and 4- to 5-ft. ripper shanks in the back. According to the contractor, it is a useful tool for dislodging granite boulders from the ground and pushing them, along with soil and other loose materials, into piles. This machine is shipped to job sites in three sections and must be assembled.

In August, bridge construction over the Los Angeles Aqueduct continued as part of the Olancha-Cartago 4-Lane Project in southern Inyo County. On the north side of the aqueduct, the alignment of the future lanes of U.S. Highway 395 meets with the connector approximately 1 mi. south of Pine Street in Cartago. The desert tortoise fence marks the edges of Caltrans Right of Way on both sides of the alignment.

"Caltrans and Fisher Sand & Gravel crews have done a great job working together to overcome obstacles on this project", remarked Deputy District Director of Engineering and Surveys Bryan Winzenread. "Everyone has joined forces to push this project forward and I am looking forward to the completion of this project tentatively scheduled for 2024."

Crews began scrubbing and clearing the land for the future lanes this past spring. 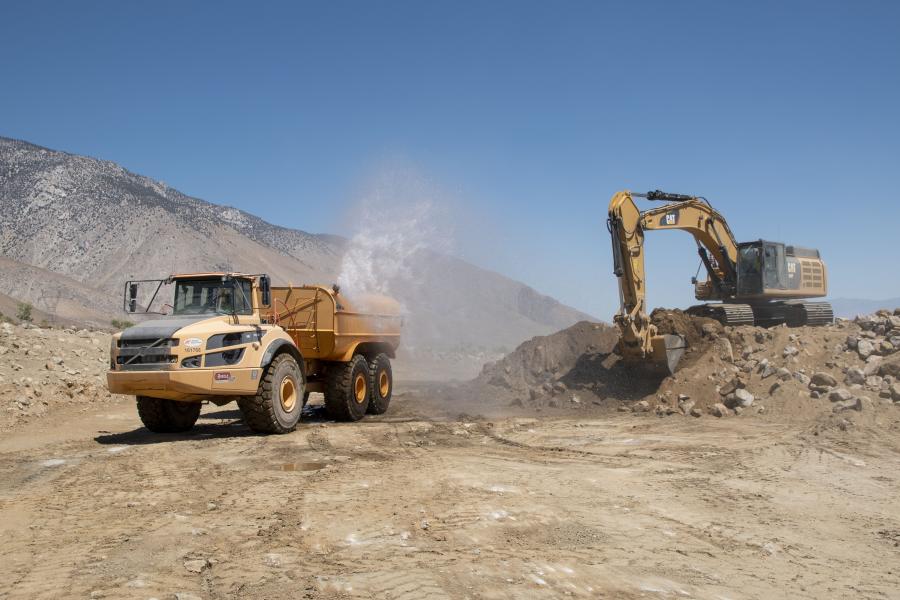 "The new alignment is being built on an alluvial fan peppered on the surface and deep into the soil with boulders and rocks," said Lingberg. "There is a large amount of earthwork in this project. In one hill alone, crews will move 500,000 cubic yards of material using excavators, dump trucks and D6 bulldozers. Construction crews with Fisher Sand & Gravel have utilized Cat D10 and D6 bulldozers with large blades and 4-to-5 feet ripper shanks to scrub the land, loosen the soil and dislodge boulders scattered throughout the alluvium. As of mid-September, crews have cleared and scrubbed approximately six miles of the new northbound and southbound alignments stretching from the southern end of the project to approximately one mile south of Cartago."

To take advantage of the natural material being excavated, FSGC set up an on-site temporary rock crusher and material plant.

"Before the boulders are taken to the rock crusher, they're broken down to a more manageable size by a hydraulic hammer," said Lingberg. "Utilizing local material in this way saves on trucking costs and reduces emissions. The rocks and boulders will provide crews with material to create roadway asphalt, drainage fill and roadway base. While the asphalt, drainage fill and roadway base will be produced on site, concrete will be trucked in from Ridgecrest, a desert town in neighboring Kern County."

An aqueduct supplying the city of Los Angeles with water transverses the new alignment of U.S. Highway 395 and will require the construction of bridges for both the northbound and southbound lanes.

"Crews have completed the bridge footings and wingwalls and abutment seats are in place," said Lingberg. "Concrete girders for both bridges have been set into place using 100-foot cranes. There are 16 total girders that will span the aqueduct, eight on each bridge. Each girder contains rebar and 24 pre-tensioned cables to create a negative camber. Deck construction is scheduled to begin in September 2022."

This is an equipment-driven project and there are 134 vehicles, machines and holding tanks, from pickups to dump trucks and bulldozers. Some of the heavy machinery used on the project include: a Cat 349L excavator with thumb, a BOMAG BMP-8500 compactor, Cat loaders — a 982M and a 966M, a Cat H180DS rock hammer, a Cat 349F track excavator, a Cat 349FL track excavator, a Volvo A60F rock truck, a Cat D10T2 bulldozer, a Cat D6 bulldozer, a Cat 420xe backhoe, a Volvo A40g 8k water truck, and a Case 580N backhoe. CEG