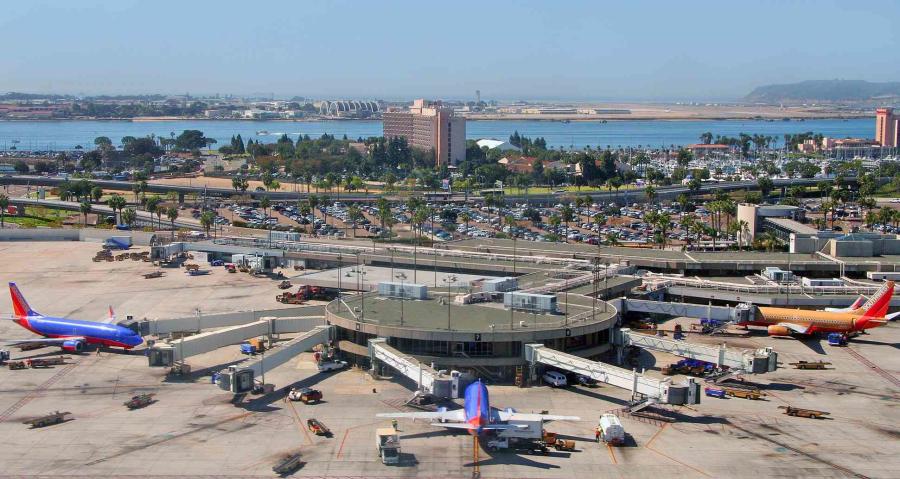 The Turner-Flatiron joint venture was awarded a contract to build a new $2.265 billion airport terminal at San Diego International Airport.

A Turner-Flatiron joint venture was awarded a contract to build a new $2.265 billion airport terminal at San Diego International Airport.

The 1.2 million-sq.-ft. building with 30 gates will replace the existing 1960's era terminal. Construction will begin in late 2021 once all environmental permits are issued. Construction will take place in two stages to ensure that the current number of gates remain available during the build out. During the first phase, scheduled to open in first quarter of 2025, 19 new gates will be added. The next phase, scheduled to open in early 2027, will add 11 new gates. When work is complete, the airport will have a total of 62 gates.

The new terminal will offer passengers more seating in the gate area, restaurants and shops, as well as additional security checkpoints with more lanes.

The terminal will offer a range of sustainable and energy-efficient features. A series of airfield improvements, including new, redesigned taxiways, will help reduce aircraft taxiing times, resulting in reduced greenhouse gas emissions. An underground fuel-delivery system will reduce the need for trucks to deliver fuel to aircrafts and result in less emissions and quicker turnarounds at the gates.

The Turner-Flatiron team has completed previous work together at San Diego International Airport and at airports in San Francisco, Oakland, Sacramento and Denver. The team brings together Flatiron's experience in airside construction as well as runway and taxiway operations with Turner's experience in airport terminal and concourse commercial structures.